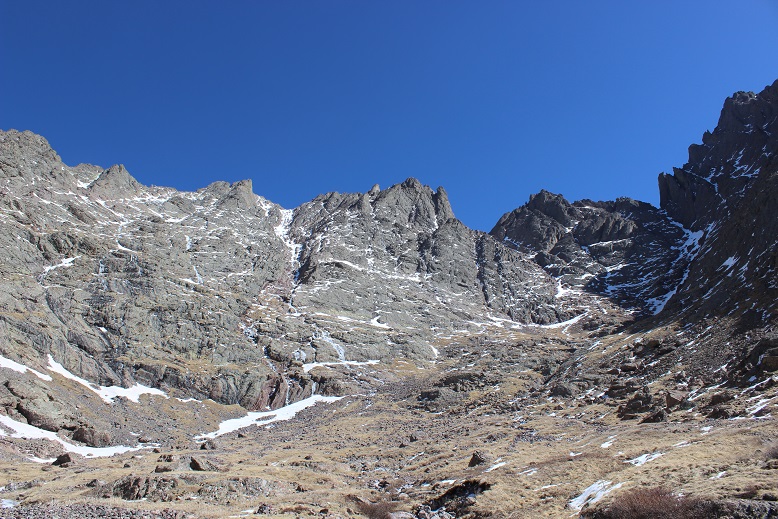 The drive to the trailhead was much easier than I’d remembered it from last time.  It’s still a 4WD trail in, but after some of the other 4WD roads I’ve navigated this one really isn’t so bad.  It was clear of ice and snow, and pretty much mud free.  On the way back there were a few more cars and a bit more mud. 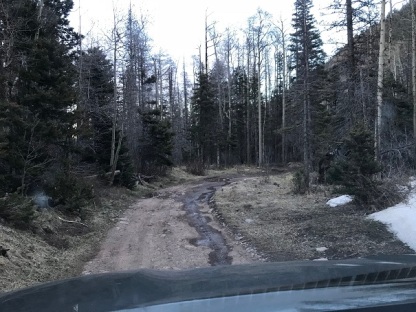 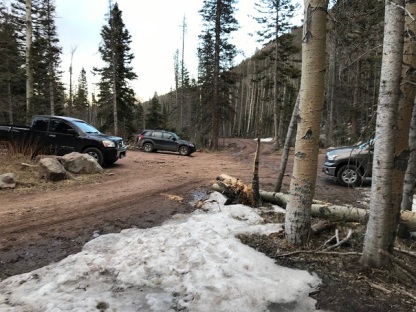 I was the only one in the parking lot when I got there.  I gathered my gear and was off around 5am.  The first thing I saw after crossing the bridge were bear tracks… 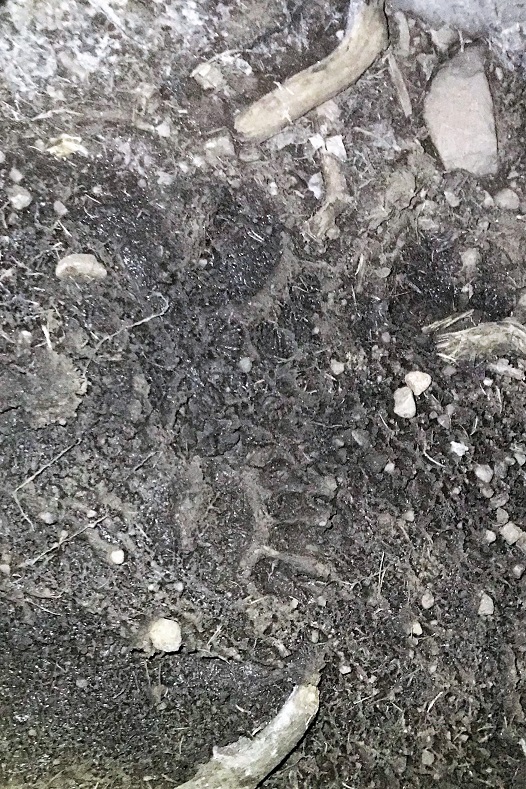 The 2.5 miles to the junction on the old (closed) 4WD road had lots of varying conditions.  There was mud, ice, snow, and water.  I was able to hike this part without traction, but it would have been helpful. 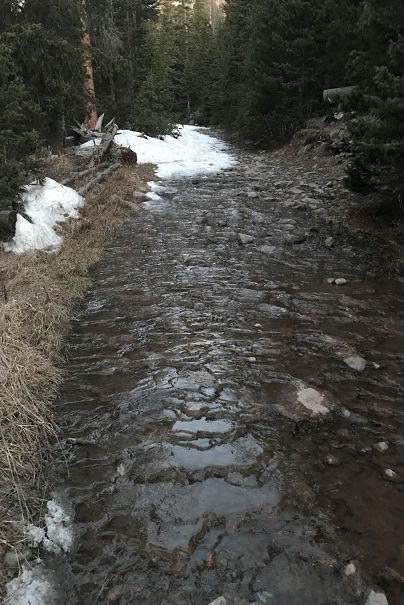 I came to the junction, turned left, and headed across a log bridge and followed the service road. 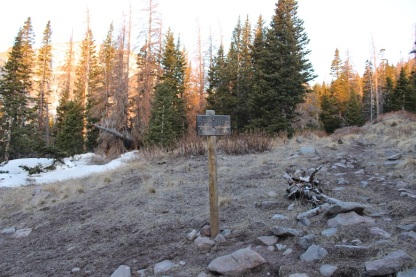 The road took me to the South Colony Lakes campground.   There was a gate for emergency access only. 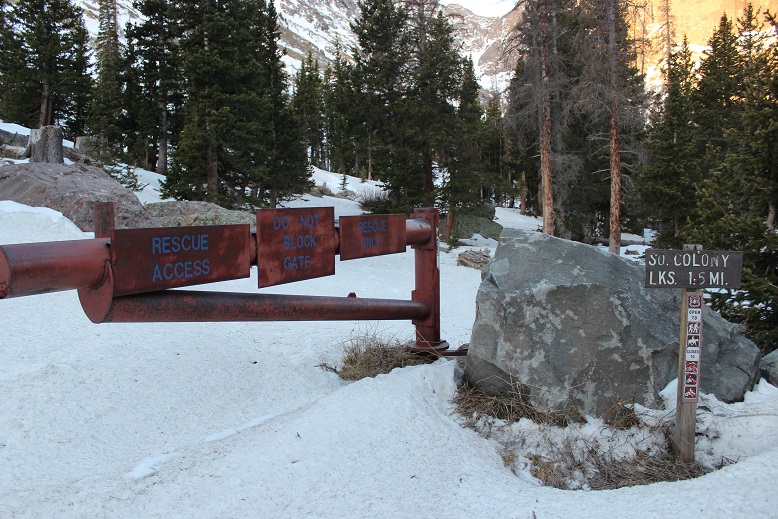 From here until I made it back to the trees traction was necessary. 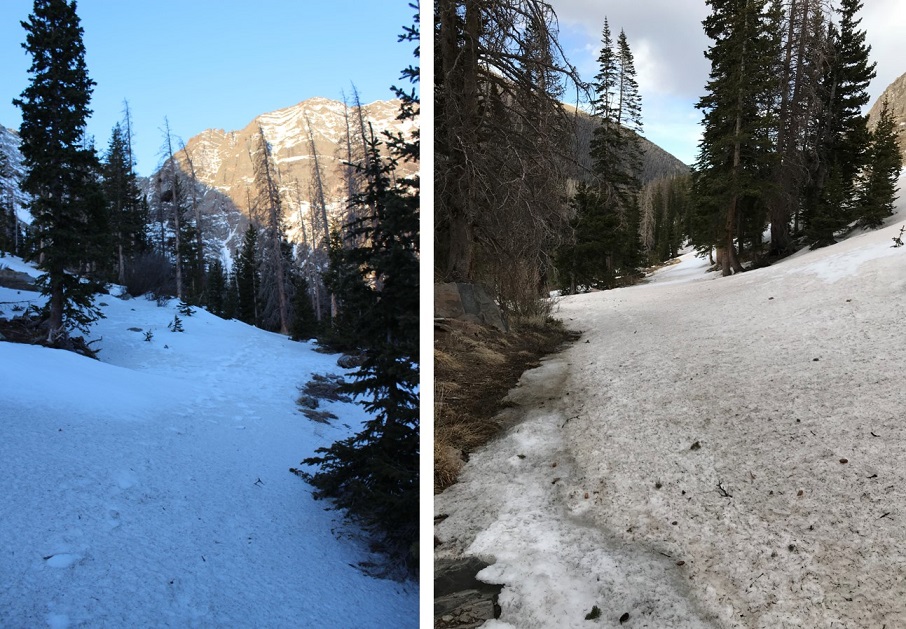 Because of the snow it was difficult to stay on the correct trail, but that just meant a little more route finding.  When I was back in the trees I took off my crampons and made my way towards the lakes.  This part of the hike was frustrating because traction was needed for about 25% of the hiking.  Not enough to really put on snowshoes and crampons, but a bit miserable without them as well. Route finding was challenging here as well. 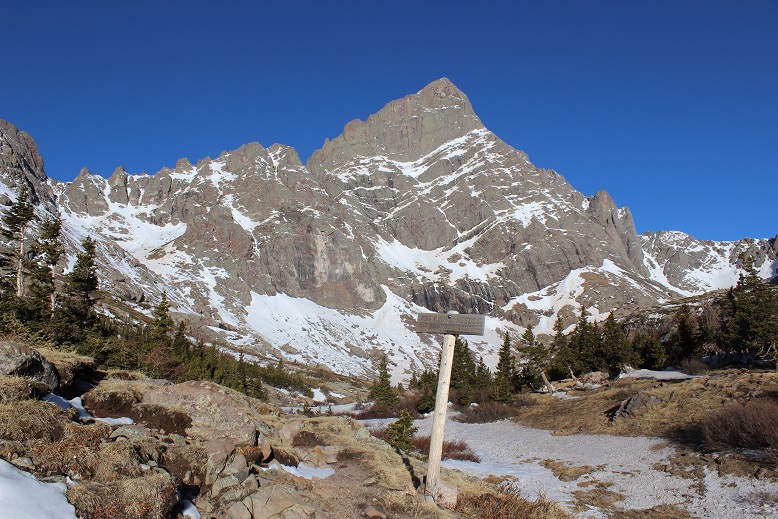 I finally broke down and put on my crampons when I reached the base of Broken Hand Pass. 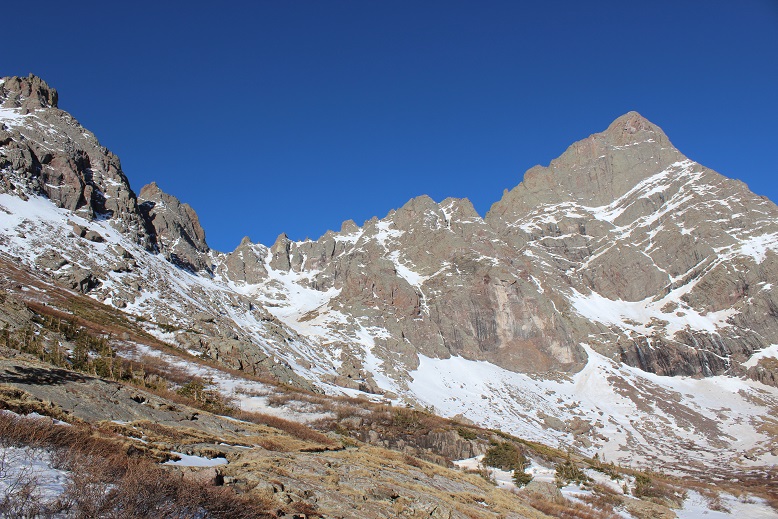 I’d been carrying my snowshoes as well, and decided to just stash them at the cairn.  It was obvious by looking at the route in front of me no one had been here in a few days at least (no foot tracks).  That meant I got to make my own! 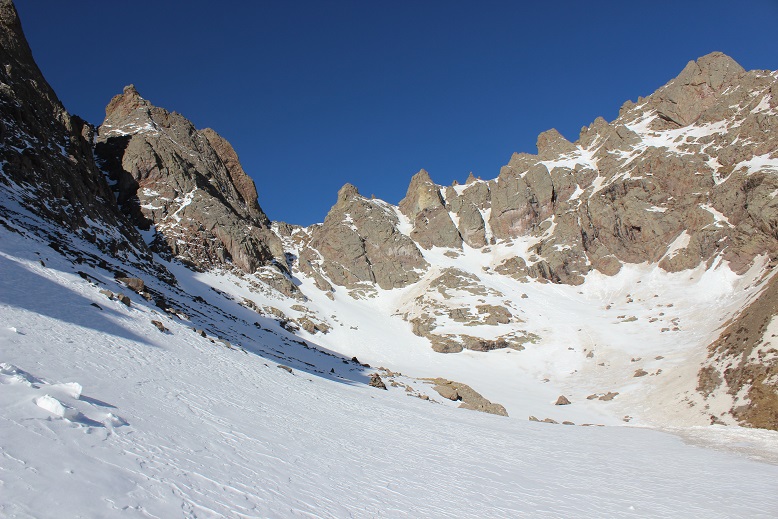 I crossed the slope and looked up at the route before me.  Time for my ice ax!

I felt much more confident this time climbing.  I’m not sure if it was because I’d done it before or the conditions were easier (probably both) but I was much more confident in my abilities.  It wasn’t until I was at the crux I realized I’d forgotten to put on my helmet!  Whoops!  I felt like a total idiot, but at this point it would have been more dangerous to take out my pack and put it on, so I carefully navigated my way around the difficult part and climbed to the top of Broken Hand Pass.

The trail down to Cottonwood Lake was dry. 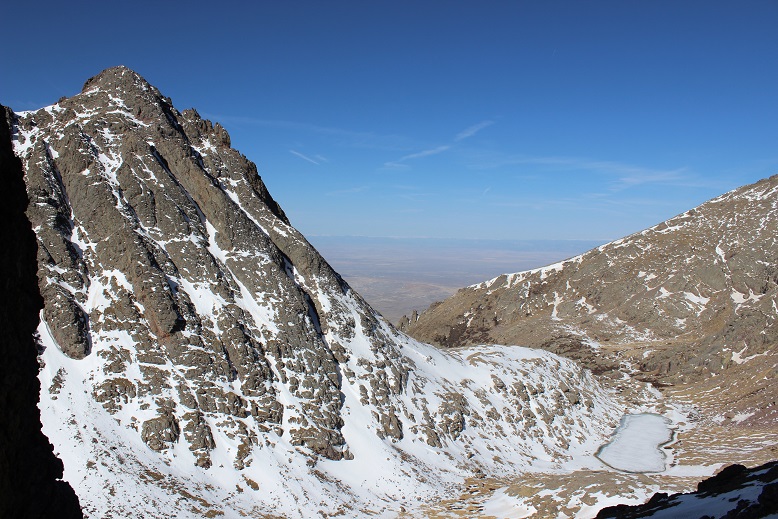 I made my way around the lake to the right, and curved towards the Crestone Basin.  Here’s where I got my first look at Crestone Peak.  It was full of ice.

I was supposed to hike straight up the red gully.  It looked daunting, but I’ve found things that look daunting from far away are actually not that bad up close, so I continued on.  Here’s the route I took. 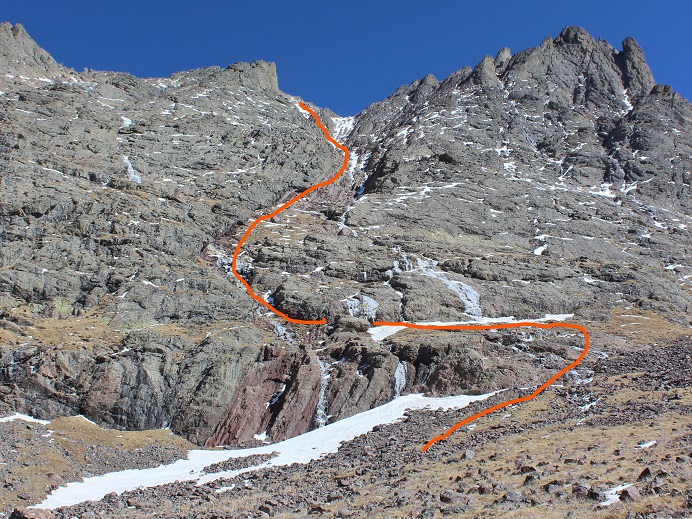 This definitely has some class 3 scrambling!  More than once I patted myself on the back for joining a climbing gym this winter.  Those tiny holds (pinches) that make rock climbing so difficult and frustrating at the gym?  I encountered several of them here, and was glad I knew how to navigate them!  The only downside is my backpack made me unsteady.  I think from now on I’ll practice climbing at the gym with my backpack on.  I also would have felt much more comfortable with different shoes.  I had on my winter boots, which don’t exactly make rock climbing easy.

Much of the route was navigable without crampons until I made it about ¾ of the way up just scrambling.  That’s when I ran into a problem:  snow, and lots of it.  The last trip report indicated a dry scramble to the top, but it had obviously snowed quite a bit since then because I had to put back on my crampons and ice ax (and my helmet) to navigate this part.  I took one step onto the snow, and sank up to my thigh. 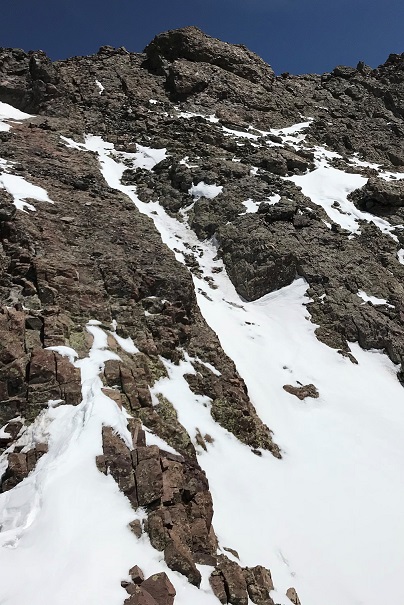 Ugh!  Not fair!  I was so close!  This didn’t look doable, but there was no way I was turning back now, so I kept prodding around until I found a stable route and started climbing again.  That meant being closer to the ice (which didn’t make me comfortable) but at least I was making progress.

This gully was about 1500 feet in elevation, and just didn’t quit!  It kept going and going and going.  Just as soon as I felt I must be near the top I’d turn and see another stretch of gully.  And it was getting warmer.  The snow was melting and becoming soft underneath me. 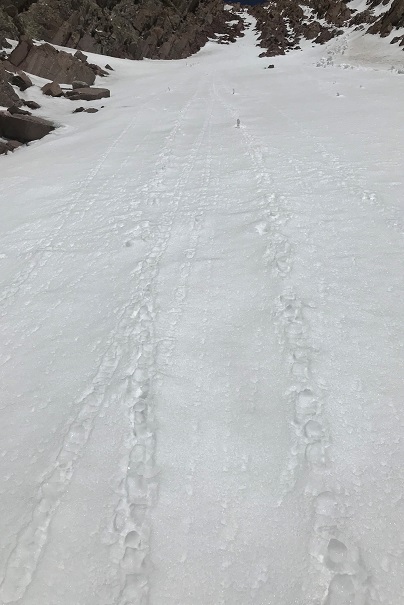 I finally made it to the notch, and while crampons would have been helpful in a lot of areas, I took them off because they were a hinderance for most of the remaining route.  Check out the view from the top of the red gully!

I summited around 12:30pm, and stayed there for longer than I usually stay on a summit. 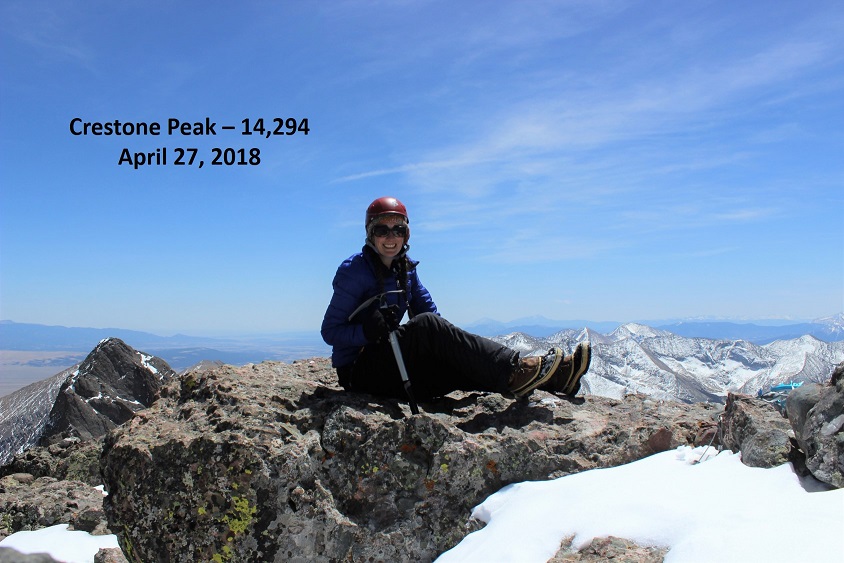 It was incredibly perfect conditions!  Very little wind, and warm but not hot.  I took some pictures and made my way back down to the notch.

This is where it got dicey.  That perfect weather I’d had on the peak was quickly melting the route I’d taken to summit.  This was not good.  I sat down and put on my crampons and developed a plan. 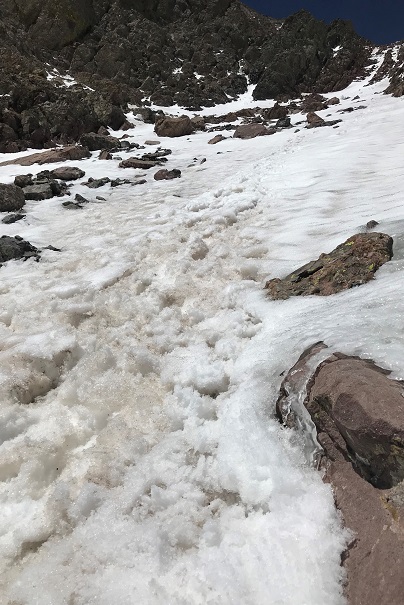 My plan?  Get down this gully as quickly as I could.  Now.

I turned and faced the mountain and began my descent.  The first bit wasn’t too difficult, but that quickly changed.  I’d step into the snow, and immediately my footprints would fill with water melting beneath me.  This was instantaneous and terrifying.  There’s just no way to describe the feeling I was having knowing my route was quickly turning to slush. 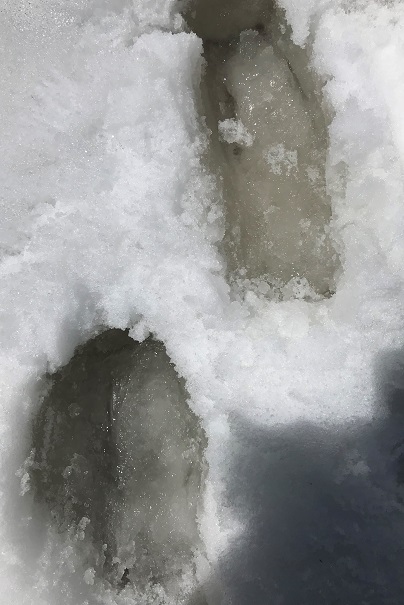 I could hear the ice turning to water and flowing underneath me, and the ice wasn’t condensed.  Several times I thought about how to handle this situation if I got to a place where I couldn’t continue.  I was prepared to spend the night in that gully if necessary (hoping the water would freeze and I could navigate back down in the morning).

I downclimbed as quickly as I safely could, but was on edge of my comfort level the entire time.  The water just kept coming and coming and the ice and snow was rapidly disappearing from underneath me as I descended the mountain.  I was aware I needed to reapply sunscreen, but terrified to do so, as I’d have to take off my backpack to get it and I knew I couldn’t do that without falling.  I gave up and mentally prepared for a nasty sunburn on my face.

I got back to the place where I’d initially put on my crampons for the gully climb and took them off, thankful I’d made it this far.  I then looked at the remaining route below me:  waterfalls.  Lots of waterfalls and water running down the exact path I needed to take.  This is not a route you want to do when it’s raining, or now when ice was melting into waterfalls.  Added to that bouldering down rocks is more difficult than climbing up.  I was extremely careful and spent a lot of time crawling to stay safe.  Once again, I was thankful for my time spent at the climbing gym.  There were several moves I wouldn’t have been able to pull off had I not known how to execute them.  There were a few close calls and I knocked my shins a few times on my way down, but I made it safely.

When I turned back to look at the mountain there were waterfalls everywhere!  It was beautiful, and I was glad to be alive! 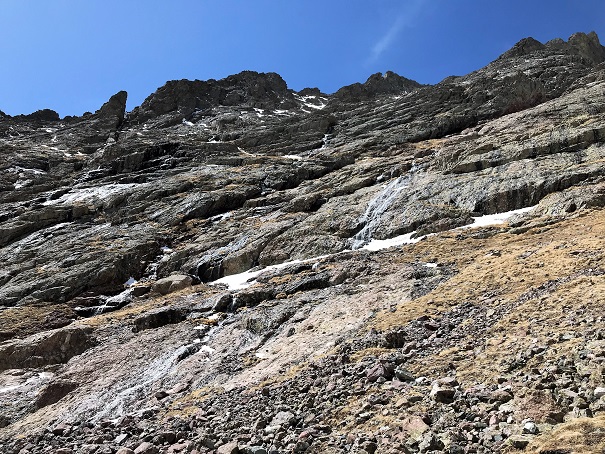 I hiked back to Cottonwood Lake and up Broken Hand Pass.  This part of the hike was difficult for me.  Not because of the terrain, but because I was physically exhausted by this point.  It was my third time going up a gully for the day, and I hate gullies.  The hike was slow going, with lots of slow steps.  I found a pretty cool jaw bone though. 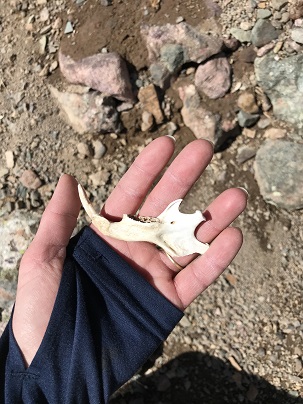 I made it to the top of Broken Hand pass for the second time that day at 4pm.  I’d really wanted to try and get Crestone Needle today too because this route included 3 gullies and I wanted to make the effort worth it, but at this point my time was running out.  I didn’t want to hike back down in the dark, and while I knew the North Facing gully below me would most likely not have been affected like the South Gullies, I wanted to get down it just in case.

I looked down at the route below me:  still snow! 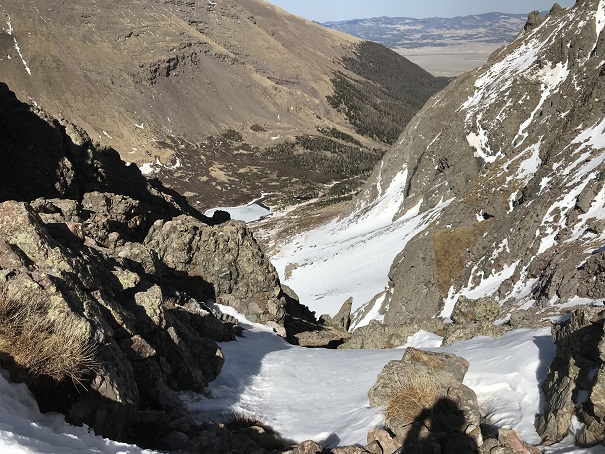 It was obvious I’d been the only one up today, so I put back on my equipment, turned and faced the mountain again and began my descent.  This was a breeze!  I’d done a terrific job last time making steps, and I was really getting the hang of this crampon/ice ax/climbing thing.  This was much easier than Little Bear!  The angle of the slope probably helped as well.

Now all that was left was to traverse the slope and head back down. 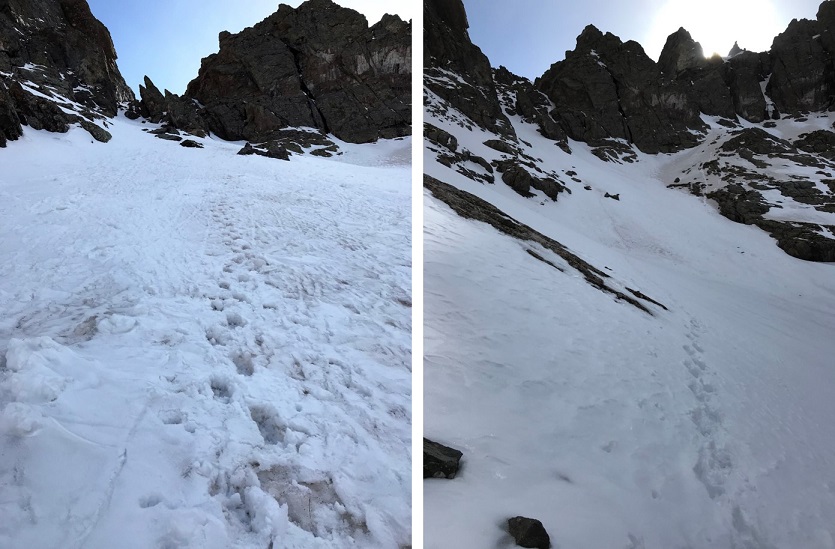 The only difficult part was avoiding the snow rollers.  They were silent, and quickly picked up both speed and mass.  I did not want to be hit by one of those things.  They ranged in size from a baseball to car tire.  I narrowly escaped at least a dozen in the 15 minutes it took me to navigate this area.  But once again, I made it! 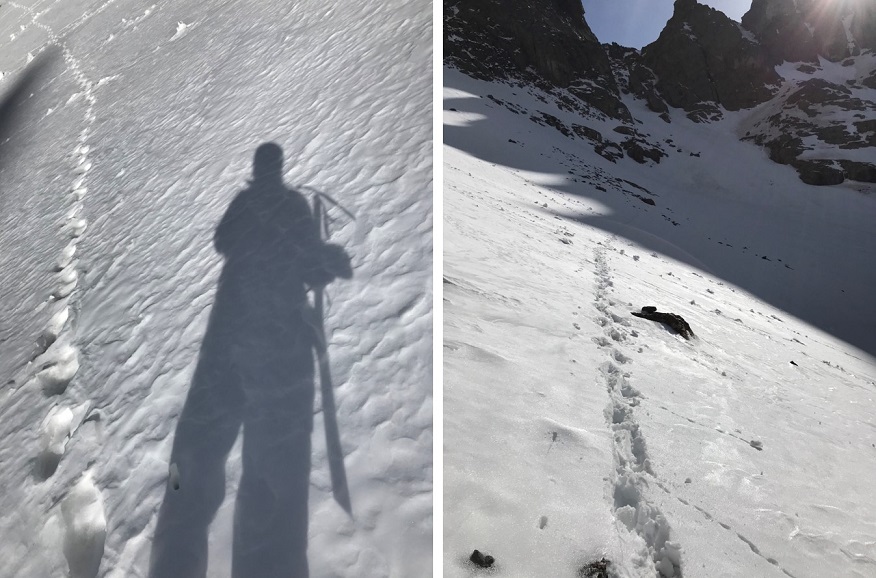 The hike out was frustrating.  The varying conditions made it not worth putting on crampons or snowshoes, but they were needed as well.  The trail was mostly clear, with areas of consolidated snow, and every 100 feet or so on the snow I’d posthole up to my thighs.  It was like playing wack-a-mole in reverse:  I never knew when I was going to end up in a posthole!  Most of the time I was ok though.

The sun began to set and the mosquitoes came out.  Tons of them!  I just wanted down this mountain and back to my truck, so I picked up my speed and booked it down.  I made it back to my truck at 7:30pm.  That’s by far the longest day I’ve ever spend hiking a 14er!  Frustrating too because it was only 14 miles, but 14 intense miles with 3 gullies and a lot of work in the ice and snow.

I have a major sunburn on just my face (it wasn’t safe to stop while downclimbing to take off my backpack to re-apply sunscreen), but it was worth it!