I’m currently in Reston, Virginia for work, and before flying here I did a quick search to see how far away it was from the Virginia Highpoint. About 6 hours, which was way too far, but I noticed it was about 20 miles from the Washington DC Highpoint, Point Reno. That was interesting. While Point Reno isn’t one of the “official 50” because Washington DC isn’t a state, I felt it would be a shame to miss the opportunity to check off a highpoint, so I did some more research.

The highest point in Washington DC isn’t really all that high: Point Reno only has an elevation of 409′, but since most of Washington DC is just above sea level, I might get some good views.

My challenge was I didn’t have a vehicle, but the Metro was supposed to drop off very close to the highpoint (ironic, I know). So all I had to do was get to a Metro station, make a few connections, and I should be good. The closest Metro station to where I was staying was a mile and a half away. Challenge accepted.

I woke up at 4am, ran on the treadmill for an hour, came back and was ready to go before 6am. It was very, very dark outside, with the exception of the full moon and some street lights. This 1.5 mile walk to the Metro Station was going to be interesting. My directions took me off the main streets and on a side bike route that looked a bit sketchy to me. Especially in the dark. I wished I’d brought a flashlight, but honestly hadn’t even thought darkness would be an issue. On the plus side I was waking up birds as I passed them, and I was pretty sure there was a golf course to my left. About halfway there runners started coming towards me with their headlamps shining and I felt a bit safer.

Finding the Metro Station was easier than I’d anticipated.

I walked up to the ticket counter to buy a pass but the attendant directed me to the automatic kiosk instead, and when I told him which stations I was using as switching points he gave me quicker directions. I thanked him and was on my way.

I took the Silver Line to Metro Central Station, got off and switched to the Red Line towards Shady Grove. This brought me to the Tenleytown-AU station. I had my phone but decided to people watch instead. Oh, and rummaged through my backpack, where I realized in fact I did have a flashlight with me. Oh well, I’d made it without one just the same.

Metros and Subways and Lightrails are interesting, but not too difficult to navigate once you know how they work. I had no problem making transfers and finding correct platforms. Also, I really felt comforted looking at the map and listening to each station being named as we stopped, reaffirming I was going in the correct direction. Until this man boarded and for some reason stood right in front of the map. He was oblivious to the fact I was appreciating its usefulness. Oh well, I had no hiccups and the whole process was much quicker than anticipated.

Once at Tenleytown-AU I exited the station and got my bearings.

It was dark when I got on the first Metro, but by the time I exited at Tenleytown the sun had some up. I headed north and when I made it to a soccer field I turned right. I was a little worried because it looked like I was on school property and school was supposed to start soon, but no one looked like they were going to stop me, so I continued hiking up over a hill.

I crossed a dirt path, and much sooner than I’d anticipated I came upon the ‘summit marker’. For some reason I’d thought finding it would have proven more difficult.

I quickly sat down on the grass and took a selfie to prove I was there, and then got up and left.

Here are a few pictures I took while standing at the highpoint. 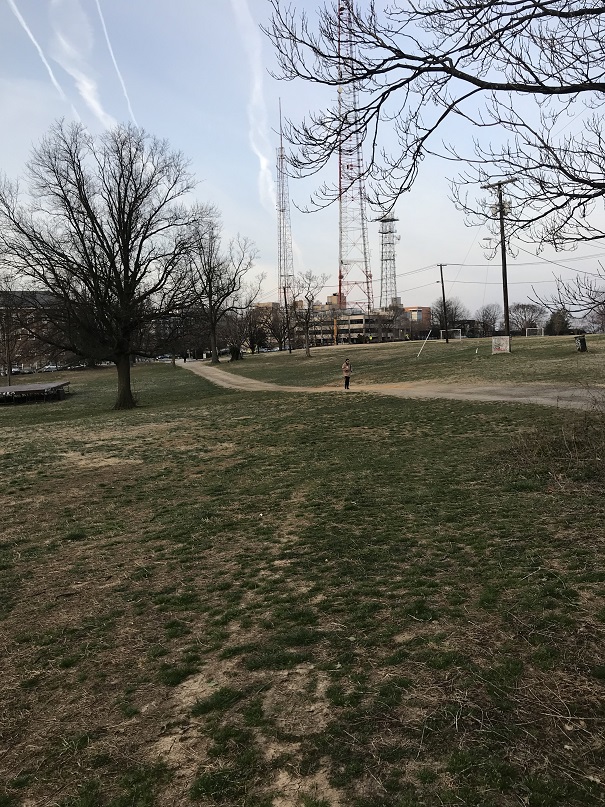 It felt weird to be celebrating checking off another one on my list with all these middle and highschoolers trudging to school. They probably thought I was weird. There were signs however indicating this was the high point, so I’m sure they must be used to highpointers taking selfies on the hill?

Here’s what the outside of the Tenleytown station looks like

And a few metro pictures. It was busy!

The walk back from the Reston station was much nicer in daylight. 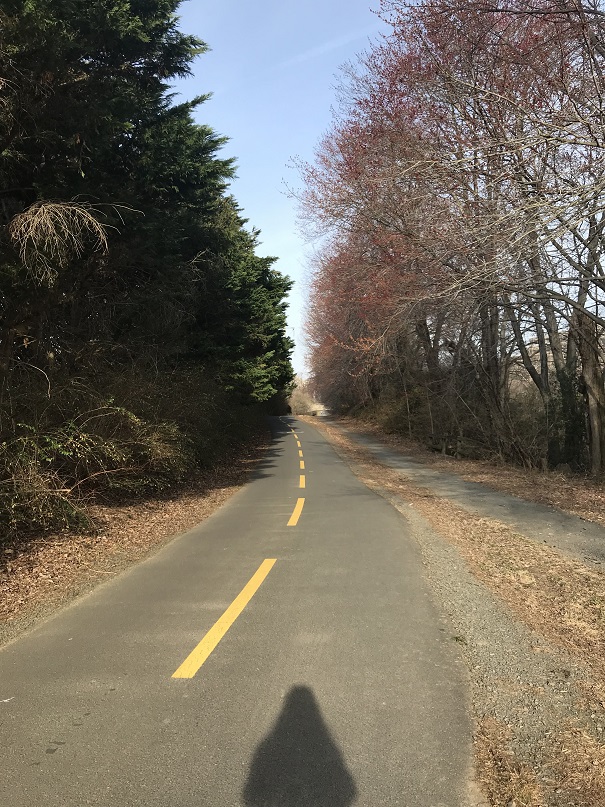 Passing under bridges wasn’t quite so scary either 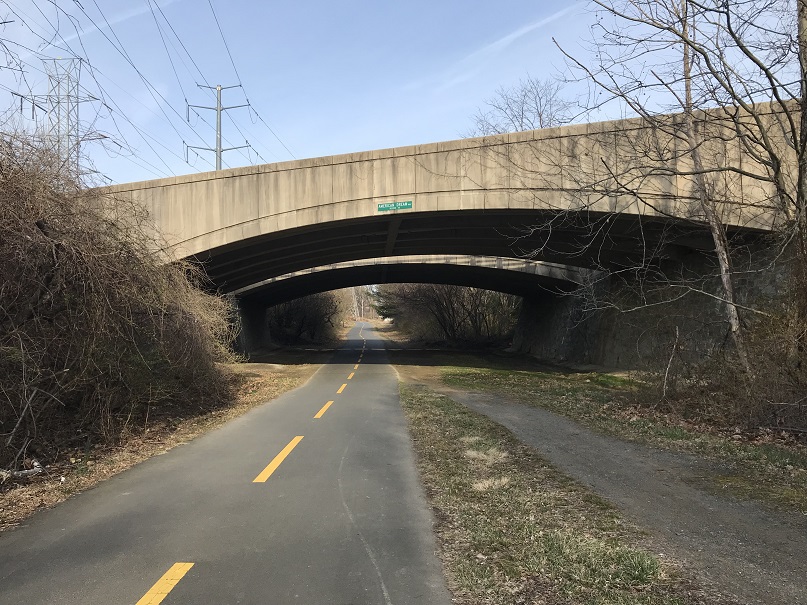 Here’s the start of the bike trail that brought me close to the Reston station (about .4 miles away)

I made it back to my hotel room at around 9am, making this a 43.5 mile journey in just under 3.5 hours. Looking at my stats I walked about 4.5 of those miles, and it looks like I had 1570′ in elevation gain, but that’s highly questionable. I’d put the number at closer to 100′. 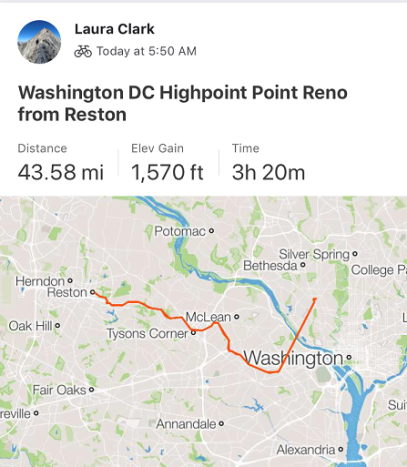 So even though this was an easy highpoint, it still felt like an adventure navigating the Metro through town and people watching. Now to get to work!