Today’s peak wasn’t much of a mystery:  With 2 left and good morning weather and a finisher already selected, Maroon Peak was my only option.   I left my house at 10:30pm and made it to the trail head at 3am.  Note:  I made it on the first try this time!!!  There were several other hikers already in the parking lot getting ready to hike when I got there.  I jumped out of the truck to get a head start, putting on my gloves as I walked.

Ugh!  I’d brought two left gloves!  No worries though, I just turned on inside out:  Problem solved!

The best part about hiking this morning in the dark?  The (almost) full moon!  If you’ve never hiked under a full moon you should.  It’s fantastic and amazing and difficult to describe.  You don’t need your flashlight, as the moon lights up the trail with a glowing mist.  The moonlight was reflecting off the lake and mountains.  I so wished I had a better camera to take pictures of the moon and stars. Also, there was a rather loud bird on the lake, which was weird for 3am. 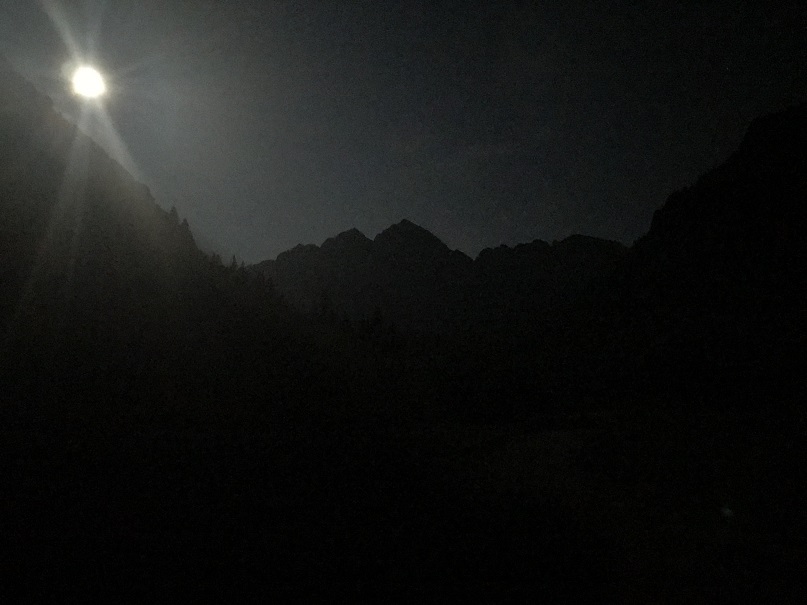 I passed crater lake and did my best to get as far ahead of the hikers behind me as possible.  I was about ¼ a mile ahead of the first group of hikers when I got worried:  I’d made it to a creek, which meant I’d missed the turnoff somewhere.  I should have been going uphill.  Drat!  So I backtracked and saw a string of flashlights starting up the mountainside.  Ugh!  I’d lost a good half mile of distance between me and the hikers behind me!  Now we were all kind of clumped together.  On the way back I took a picture of the junction.  Can you tell which way I should go?  Let me tell you, in the dark it all looks the same….

This is the way you’re supposed to go 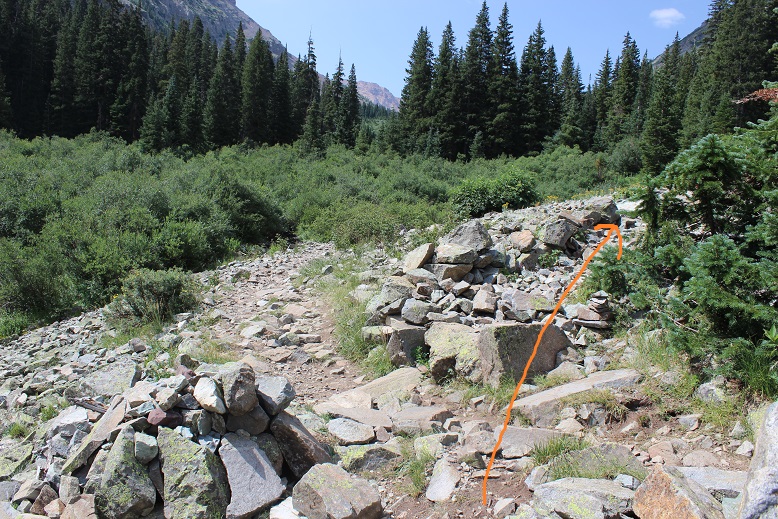 In any event, I politely rushed past them as best I could and was on my way up the mountainside.  The trail up to this point was very well maintained and has great signs

But not for long.  It quickly turns into a slippery scree and gully trail that goes for 2800’ with some rocks thrown in.  In the dark I noticed 3 flashlights ahead of me?  Hmmm…. I hadn’t noticed them before?  Maybe they’d gotten a super early start?

Your goal is to hike up this

After I saw the goats the sun started to rise!  I stopped for a bit just to enjoy

At the top of the ridge crest I met up with the three other hikers.  They’d started at 3:45am from the junction (yes, the one I’d missed) and were impressed I’d caught up with them.  We had a great chat, and I was on my way, intent on route finding alone (I like route finding… it makes me feel like I’ve “earned” the hike).

OK, so after the ridge crest this is the next obstacle… 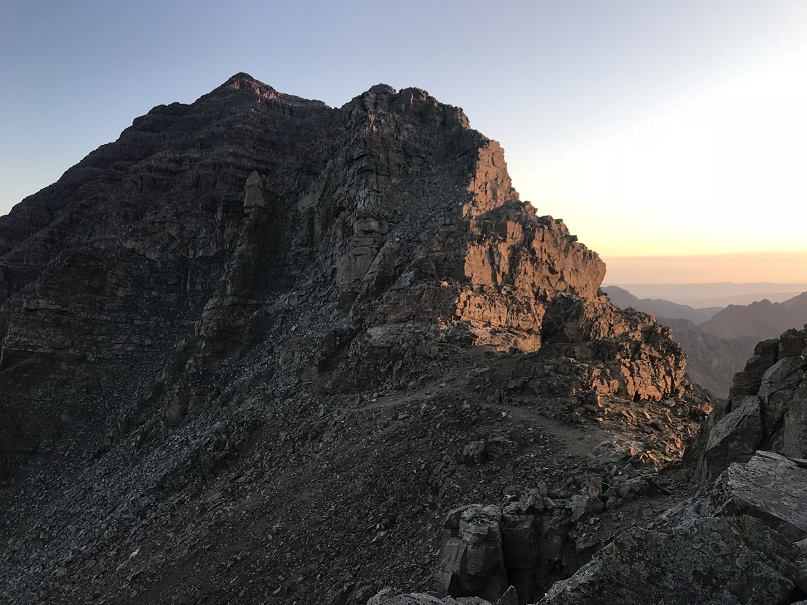 The best way I can describe this is a lot of loose rock, and just keep going up and to the north.  There are several routes to the top, but I tried to stick to the “standard” route.  Several gullies are involved.  But first you encounter a chimney.  This was a great chimney to climb:  very stable with lots of hand/foot holds

After this just follow the cairns… see them up there?  Yes, those cairns. 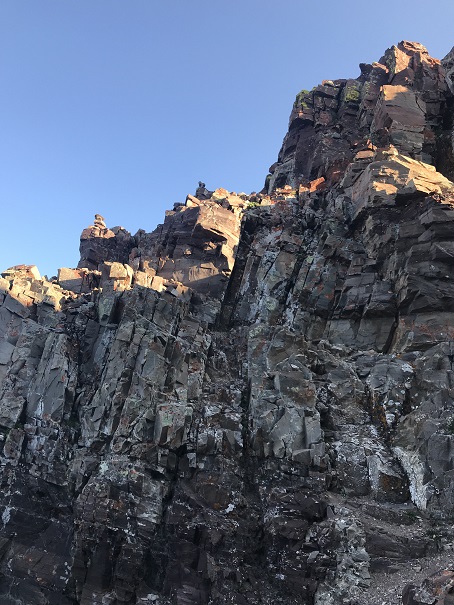 I kept following the ridge north and came upon the two gullies.  I’m not a fan of gullies.  Either one of these gullies is climbable, but when I looked at them the first gully looked like it had more stable rock, and the second gully had that sand/scree mixture I dread.  I chose the first gully. My instructions said to get a good look at the route you want to take before doing it because once you’re in it it’s difficult to figure out.  Those directions were right.  Take some time to study the route you want to take before diving in.   Here’s the route I took.  (I was very happy with this route…)

OK, more ledges and more going north until you hit another gully (big sigh).  This gully had a lot of sand and large rocks, but if you hug the right side you have stable hand holds.

At the top of the gully is a notch

Aim for this and turn left.  More ledges…woohoo!  Actually, I like this type of climbing!  These were taken from the way down (so you can see depth with other hikers).  The ledges just keep going, and going, and going.  Just aim up

Eventually you’ll reach a ledge.  Follow that ledge to the summit (it has cairns)

I was so excited when I reached the summit!  The climb had been intense but FUN!!!  From the summit I could see Snowmass and Capitol

I took a summit selfie to prove I’d summited

And headed back down.  I saw tons of people coming up as I was coming down!  All those flashlights form earlier in the day took on faces.  Some people looked more than prepared for this climb, and others looked scared out of their minds.  I helped several with route finding.  Just for fun, here are a few of the gullies on the way back down

I talked to several more hikers, and just after taking a photo of a group on the ridge lost my phone!  I spent about half an hour trying to find it (I did, but backtracking up stinks!)

I made it back to the first ridge and noticed a marmot absconding with someone’s hat and water bottle.  Marmots are notorious thieves, stealing everything they can get their paws on.  I was surprised someone had left these items without putting something (a rock?) on them to hold them down.   It was comical to see the marmot running away with them.  Sorry to the owners, the marmot was actually pretty quick and far away from me when this happened, or I would have tried to stop it

I didn’t see any more goats on the way down, but I did see a lot of late and ill prepared hikers.  Most had no clue what they were getting into, as they’d just come up for a “day hike”.  Water?  Check.  Anything else (hat, jacket, map, food, sense of direction/upcoming weather etc?)  Nope. They didn’t even know climbing as involved.  I guess this is how people get into trouble….

Anyway, as I hit the final ridge I put on my microspikes for the scree/dirt descent.  I’ve heard too many stories of people slipping here and breaking/spraining a wrist or ankle to take a chance without them.   If you don’t use microspikes on scree you totally should!  It makes a world of difference:  I didn’t slip once!

And check this out!

There were tons of people on the trails today!  Tons!  I made it back to my truck at noon, making this a 14.8 mile hike in 9 hours.

The Maroon Peak Summit Sticker can be bought here