I was supposed to hike yesterday. I got up at 2am and drove up and through Woodland Park to increasing snow.  I checked my weather app and it looked like it was going to snow in this area until 8am.  I made it to Lake George and was forced to turn around due to road conditions (they don’t plow this road at night).  So while I’d done my research and the weather conditions were good on the peak I’d intended to hike, the only road into that hike had bad weather and I was forced to turn around.  Bummer!  What’s worse is I’d already had quite a bit of coffee, so when I made it home around 5am I was unable to go back to sleep.  Oh well, I ran on the treadmill, got a lot of much needed cleaning done, took my daughter ice skating, did some grocery shopping, and made it to bed a bit early to try again the next day.

OK, round two. I chose a different peak for today because of weather reasons.  I drove almost the exact same roads as I had last night and thankfully they were completely clear:  You’d never know it had snowed yesterday.  I made it to the Baldy Trailhead around 4:45am and there were several other cars already parked in the lot. 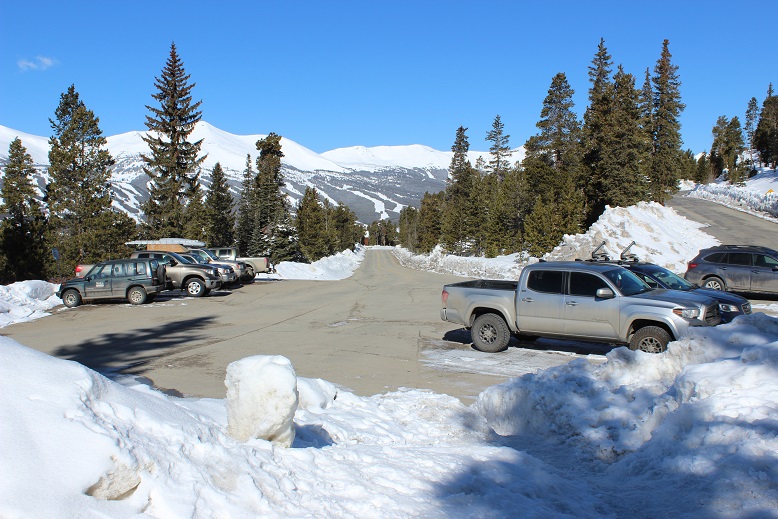 I gathered my gear and was on the trail around 5am. The 4WD road was closed, but the hike along the road was packed down from previous skiers/hikers.  I wore my snowshoes from the parking lot, but they weren’t really necessary (I just didn’t want to carry them).   They were necessary at the Iowa Mill.

This part of the hike was quite peaceful. I made it to the Iowa Mill while it was still dark and here is where the road ended and I encountered tons of ski tracks.  I got out my map and saw there was supposed to be a dirt road that switchbacked up the slope, but since I couldn’t find the road under all this snow and I’m not a fan of switchbacking I just aimed south and hiked straight up the slope.   This was very efficient and quite a workout on my calves.  There weren’t any ski marks here, or footprints.  In the dark the slope seemed steep, but I knew it was less than 30 degrees.  Also, in the dark it seemed to last forever! I just kept aiming towards the radio tower and trudged on.   I could see what looked like a mine in the distance I’d like to explore on my way down and made a mental note to check it out later. 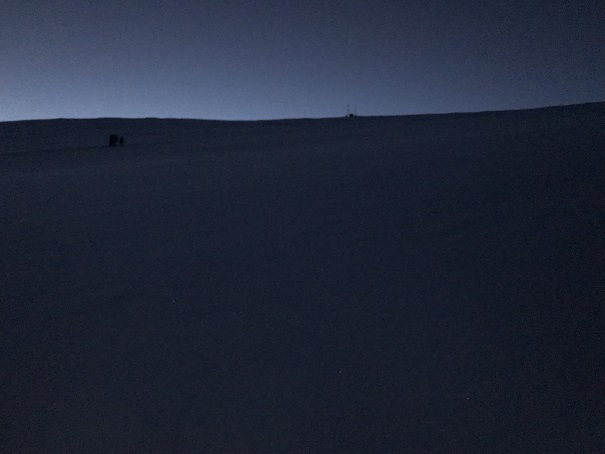 I made it to the radio towers and took out my phone to take pictures. It immediately died and I stuck it back in my pocket. It’s a good thing I always lug around my DSLR while hiking.  For those of you wondering what Breckenridge looks like from 12000’ at 6am, here you go: 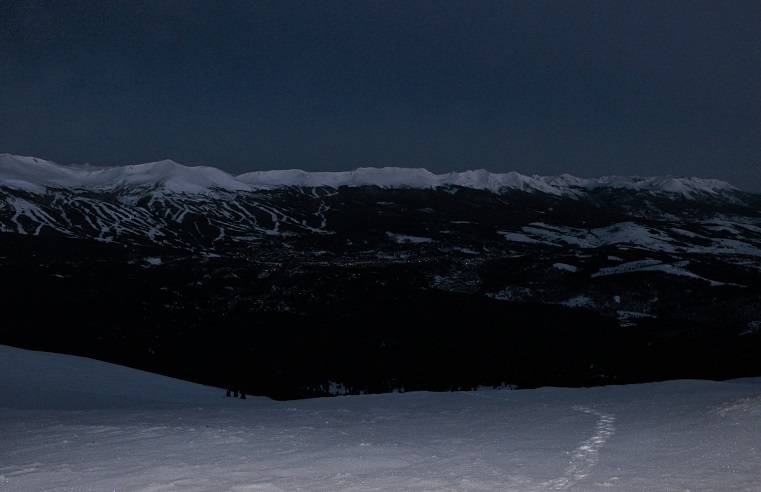 OK, I’d made it to the radio towers 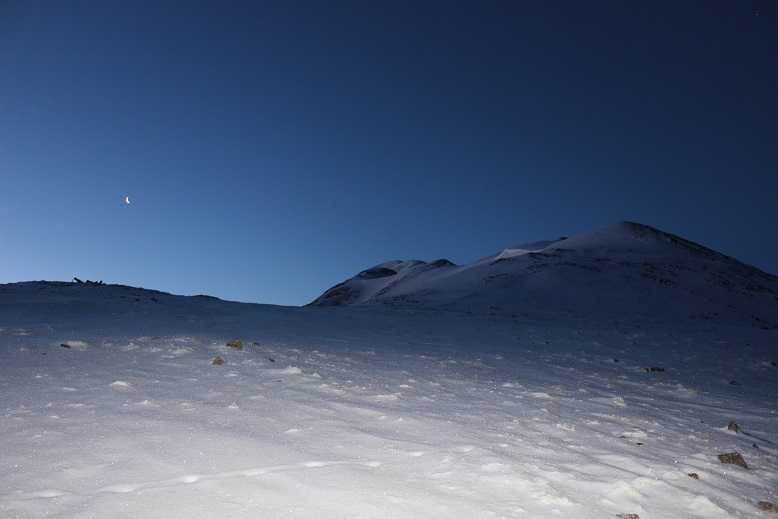 This was going to be easy! All I had to do was follow the ridge to the summit.  There were many ups and downs.  Here’s a look at the first up

and a few more

Around now the sun was beginning to rise. Alpine sunrises are totally worth 2am wake up times!  I took a few minutes to just stop and enjoy. 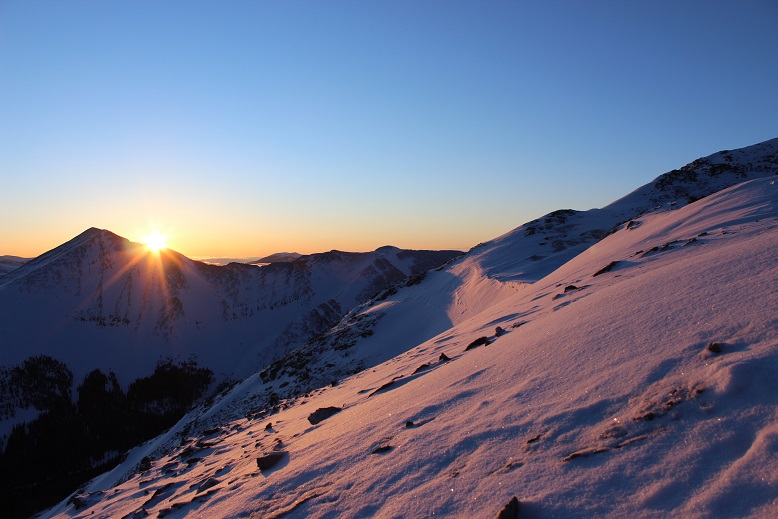 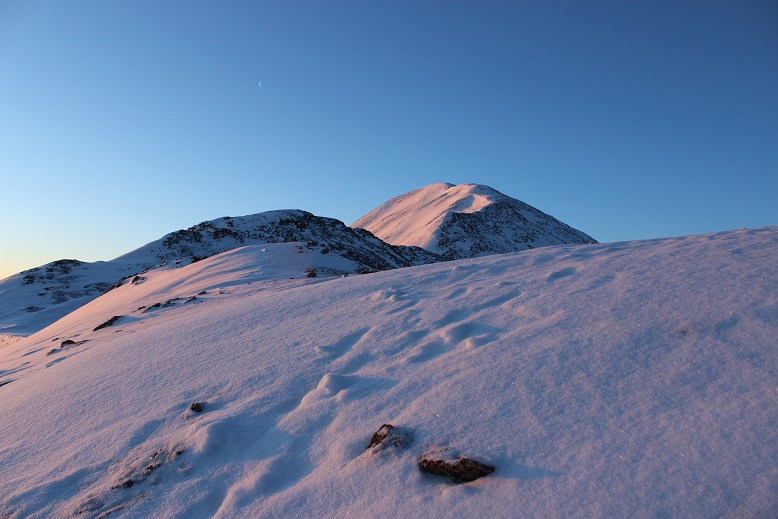 There are cairns indicating you should go right (west)around the mountain, but with this much snow it’s much easier to just stick to the ridge (at this point I took the cairned route, but don’t recommend it). The cornices are very large but also very avoidable.

The sun had only just risen, but I could already tell it was going to be a bluebird day for most of the day, despite the cloudy forecast. As I looked in the distance I could see clouds, but they wouldn’t be getting in the way of my hike today.

I’m not sure what time I summited (my phone was still dead and while I had a charger I didn’t much care). The summit was flat and snow covered, so much that even the wind shelter was invisible.  I wanted to get a picture with the mountains in the background so this is what I came up with. 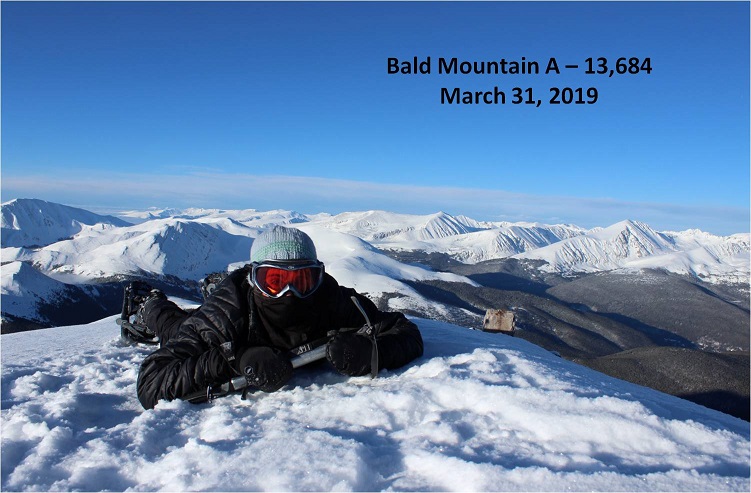 Not only was today a bluebird day, there was no wind! This was fantastic!  I wasn’t even cold (it had to be warmer than the forecasted 18 degrees… it felt more like it was in the 30s).  My fingers and toes weren’t cold either.  Woot!

Here’s a look back at the way I’d summited 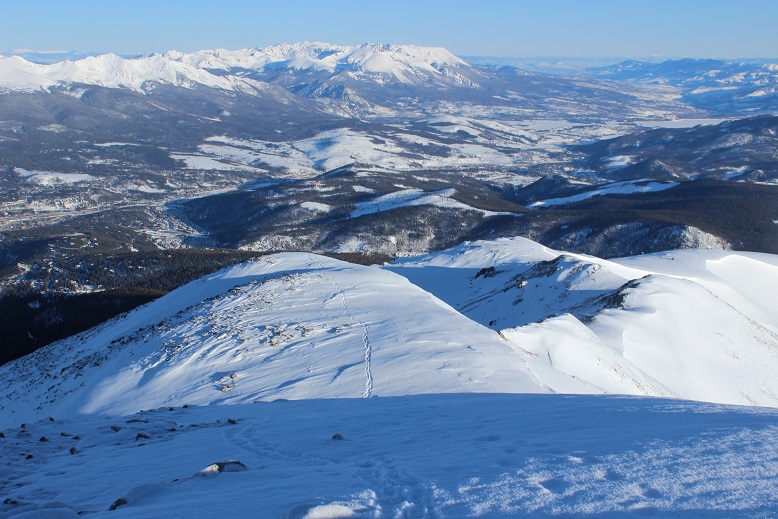 OK, so on the way up I’d taken the cairn way around the side of the mountain, but I could tell from my view here it’d be an easier hike if I just stuck with the ridge, avoiding all of the exposed rocks on the west side. The climb was a bit steeper in areas, but that just meant I got to use my ice axe 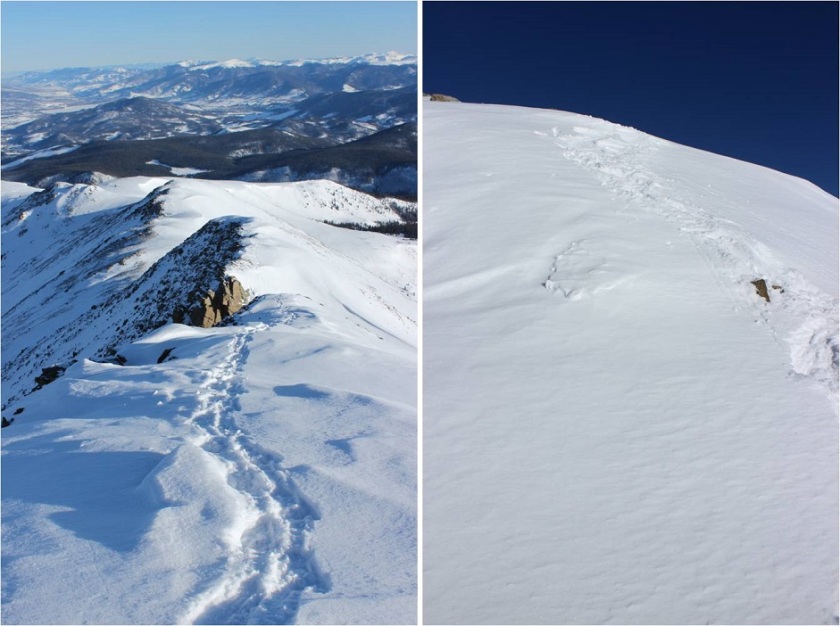 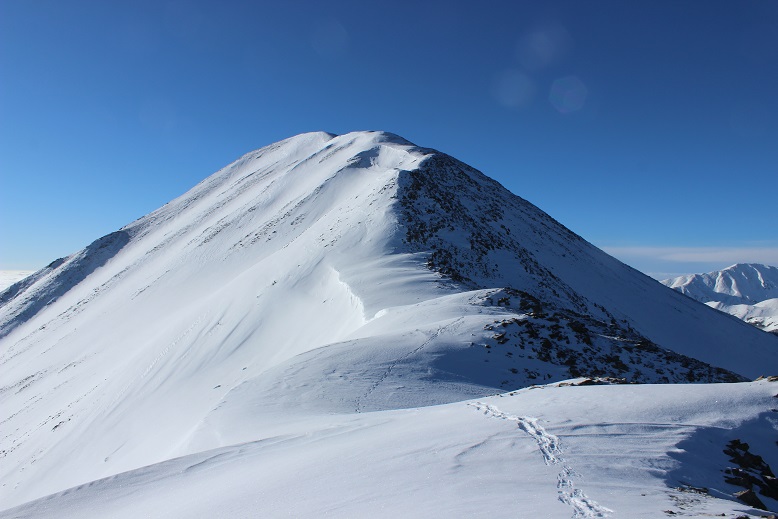 I made it back to the radio towers and in the light of day could see the slope here is a popular backcountry ski area. 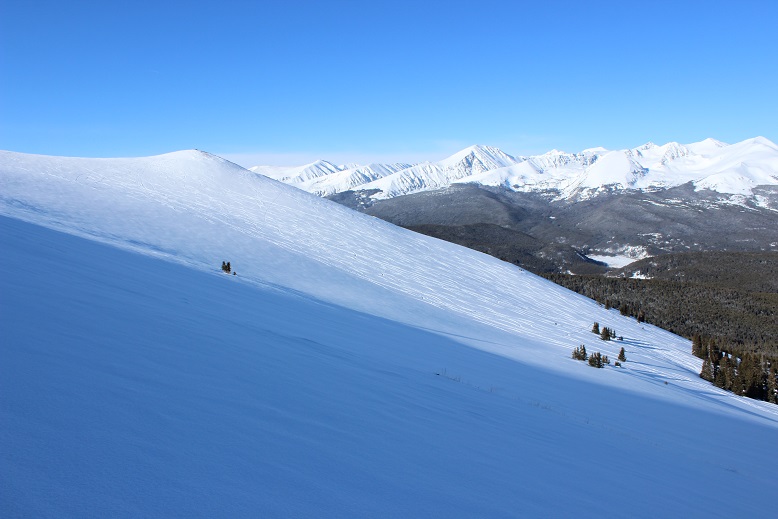 This is when I realized I hadn’t seen another person all day, yet there had been several other vehicles in the parking lot when I’d arrived, with signs that clearly said no overnight parking/camping. Hmmm.

All the tracks were to my left (west) but I really wanted to get a look at that mine, so I went right. It was nothing special, or it could have been more special when less covered in snow.  In other words, there wasn’t much to see.

From here you can just follow the wires back to the Iowa Mill, but I decided instead to cut across the slope and pick up the trail the way I’d come. I could see my morning tracks from where I was, so I just aimed for them and cut across the slope.   I debated glissading but in the end decided against it as it would put me far away from my earlier tracks.

Back at treeline all the ski tracks came together and I was able to find the road again.

Here’s the Iowa Mill in daylight

The hike out was very straightforward. I saw three skiers hiking up as I was hiking out (the only people I saw all day).  I was glad I’d gotten an early start:  I wouldn’t want to be hiking the slope while others were trying to ski.

The entire hike today had been very enjoyable. The weather was perfect, there weren’t other people on the trail, I got to make my own route for much of the way, and I even used my ice axe for a bit. Nothing had been too technical, which allowed me to get in some really good thinking. 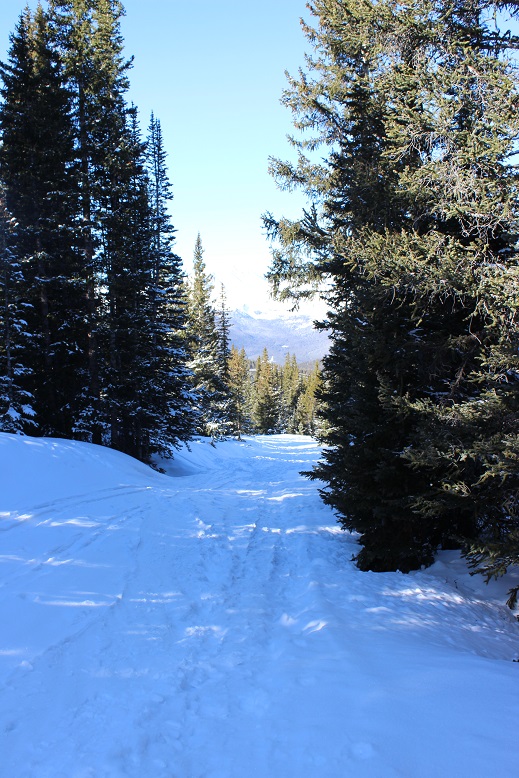 I made it back to my truck at 9:30 am, making this a 9 mile hike in 4.5 hours. I changed my clothes and put on sandals in place of my shoes for the drive home.  I took a good look at my feet, surprised they hadn’t hurt today like on so many of my recent winter condition hikes. My feet were a yellow-white, and I mentally high-fived myself, not exactly sure how but thinking I’d avoided an attack.  My truck wouldn’t start so I adjusted the battery (that fixed it) and looked at the temperature: 21 degrees at the trailhead.  Wow!  It had been cold out there!  I just hadn’t noticed because there hadn’t been any wind and I’d been exercising.

About 10 minutes down the road my left toes started hurting quite a bit. The pain was a very intense burning sensation. I immediately knew what was going on but kept driving anyway, as there was nothing I could do about it.  I looked down and yes, my toes were blue.  Ugh!  When I made it to the town of Alma I stopped to take a quick picture for documentation purposes (they looked much better at this point) and just kept driving. When I have an attack they go from white to blue to red.  Red is the good color.  My toes were still hurting but since my left foot was the only one affected I could still drive.  I saved this picture for the end, as well as one of the less graphic pictures of my digital ulcers from last month.  By now I’m used to this, and know it’s a consequence I’m willing to pay for getting above treeline in winter/spring. Apparently it happens even when my toes don’t get cold.  Luckily, as long as I baby them they only take about a week to heal, which ends up being perfect for my next week’s hike!