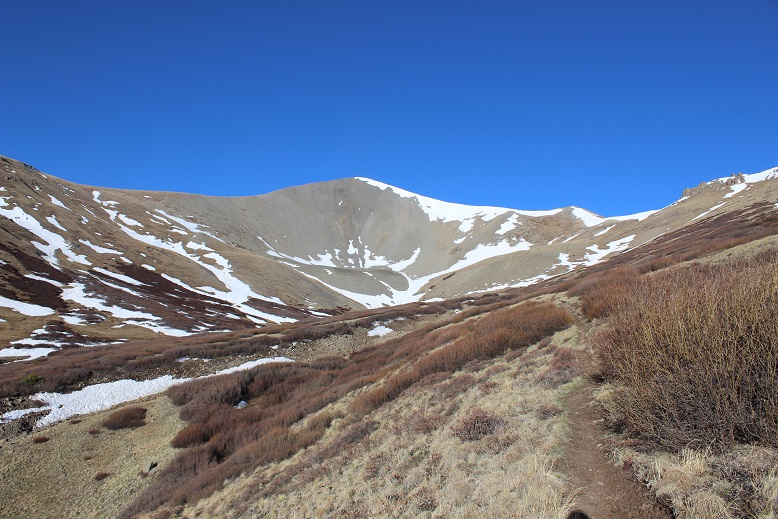 Elevation Gain:  3600’
I’ve never had a traffic ticket in my life, but I was pulled over by two different police officers on the drive to the trailhead this morning.  I left at 12:30am for this hike, and at about 1:30am I saw police lights flashing behind me.  I knew I wasn’t speeding.  I never speed when driving in Colorado at night.  I’ve had too many rabbit, deer, elk, bear, fox, porcupine, bear, squirrel, etc. dart in front of me at close range to drive over the speed limit.  It’s a death sentence for both you and the animal.   I actually drive slower at night than I do during the day.  Confused, I pulled over into a closed Sonic and looked for my license and registration.  The officer was very nice, and let me know I had a headlight out.  After making small talk for about 10 minutes he gave me his card and let me go.

About an hour later I saw flashing lights behind me again, and once again pulled over to the side of the road.  This time I was prepared (I hadn’t put away my license and registration yet, so it was still in my lap).  The officer walked up to my car:

Officer:  “Do you know why I pulled you over?”

Me (as nicely as possible): “Yes, I was just pulled over a little while ago.  I have a headlight out”

Officer:  “Nope, you were speeding”

I took a deep breath and apologized for going over the speed limit.  He asked me for the card of the previous officer that pulled me over, and then went back to his truck for a minute.

You can imagine all the things I wanted to say at that point, but I just put on a smile and politely waited for him to return.  When he came back he gave me his business card (and kept the other officer’s card for himself).  He chatted with me for a bit about where I was going, and then eventually…

Officer: “I’m going to let you go with a warning, but from now on keep if 5 below the speed limit.  Here’s my card.  It has my phone number on it. See, right here (he pointed to the phone number he’d written on the back of the card).  If you have any questions about why I pulled you over today, call me.  If you get pulled over again for your headlight being out before you can fix it call me and I’ll take care of it for you.  My number is right here (he pointed again).  Call me if you have any questions”.

At this point I clearly knew what was going on, thanked him, and was on my way.  I had no intention of calling him.

I’d started the drive with a full tank of gas, and planned on getting gas before the turnoff to the dirt road that led to the trailhead, but unfortunately I drove for over 75 miles and never saw a gas station.  It was going to be tight, but I thought I could make it.  Note to others driving from the North:  The last gas station is in Saguache, and it’s closed overnight, so you need to get gas in Salida.

I drove down 27 miles of 2WD dirt road in the dark to the trailhead.  The conditions were actually pretty good. There were a few downed trees in the road, and the creeks were pretty low for this time of year.  Here are some pictures from the way back (note, the creeks rose about a foot during the day)

There isn’t actual parking at the trailhead, you just park on the side of the road.  So I parked, got my gear together, and was on my way at 5:15am. 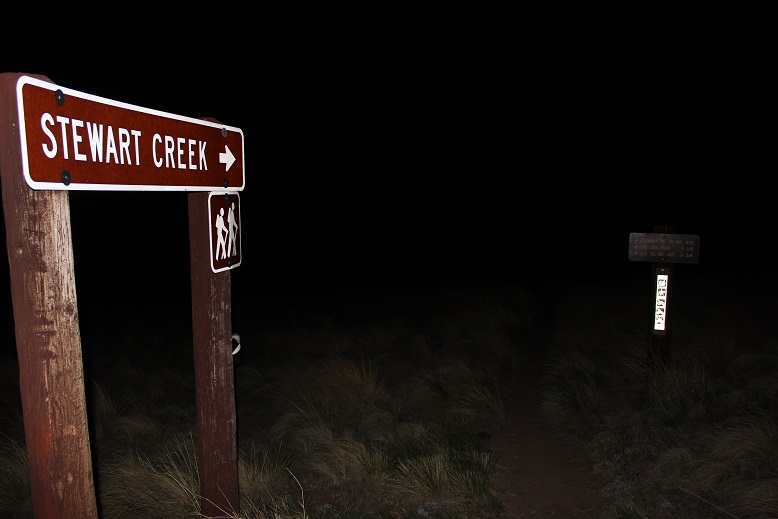 This trailhead has signs!  Woot! I love a trailhead with good signage. 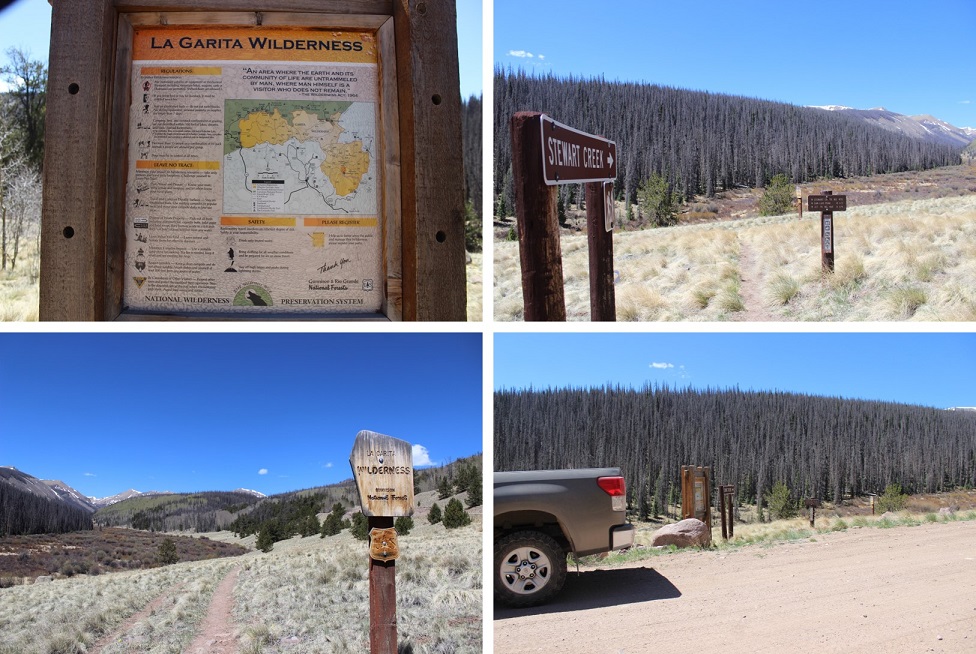 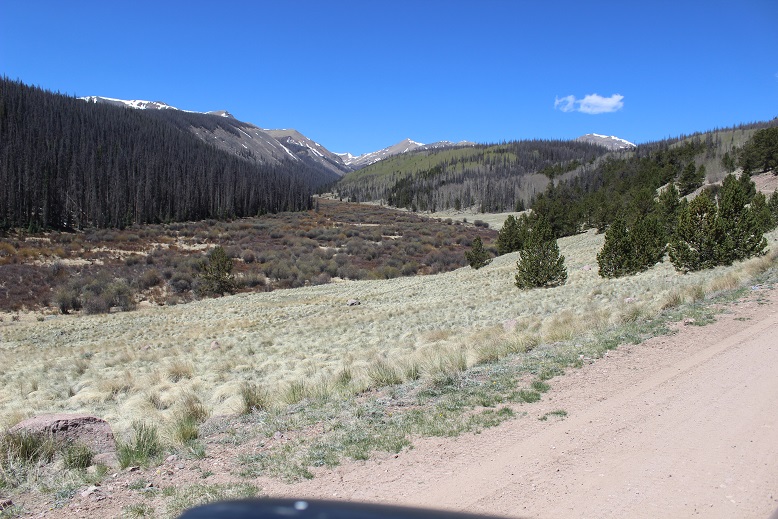 Eventually coming to an area with a lot of beaver dams. 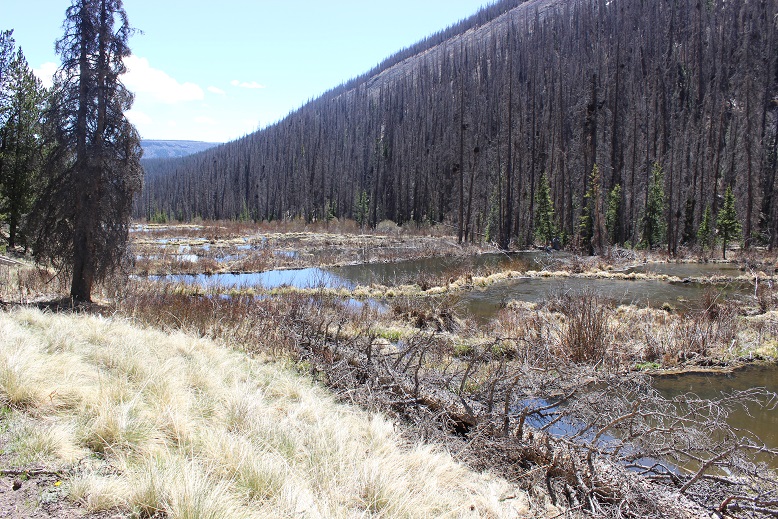 I saw a beaver swimming in the pond in front of me and decided to take a quick video.  The birds were chirping, the sun was rising, and the beaver was swimming peacefully from his den when all the sudden: Whap!  This happened:

Hmmm… is it mating season?  I continued on, noting how most of the trees were dead here.  It was really quite sad. 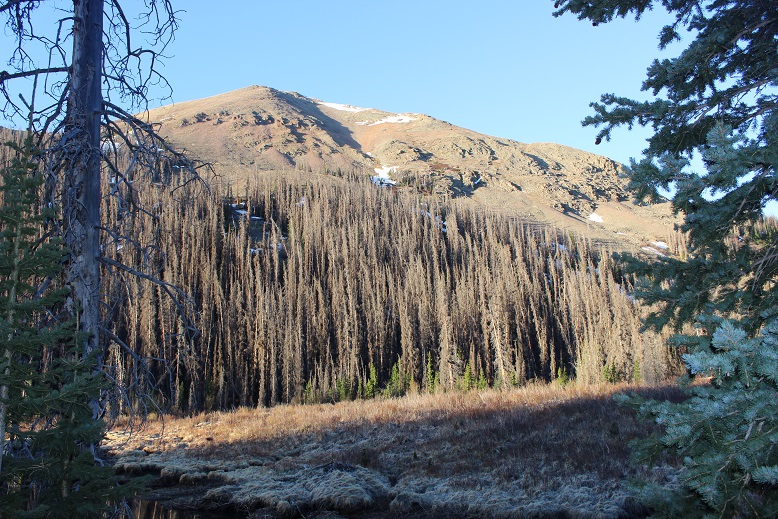 I passed the remnants of a cabin 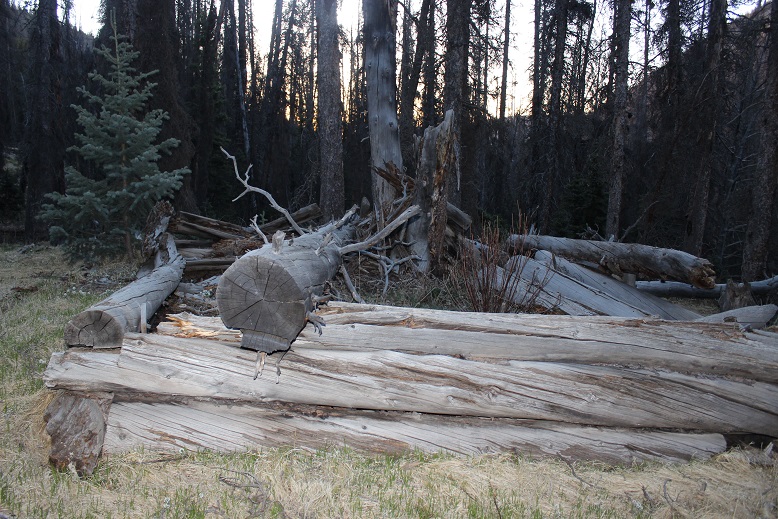 And started seeing tracks. Lots and lots of tracks.  I’d been seeing deer and cattle tracks (and scat), but these were different.  These were moose tracks.  It made sense:  The creek/willow area was prime moose habitat.  I’ve seen moose in the San Juans before, so I decided to keep a lookout for them. Oh, and there was moose scat too.  Lots of it! 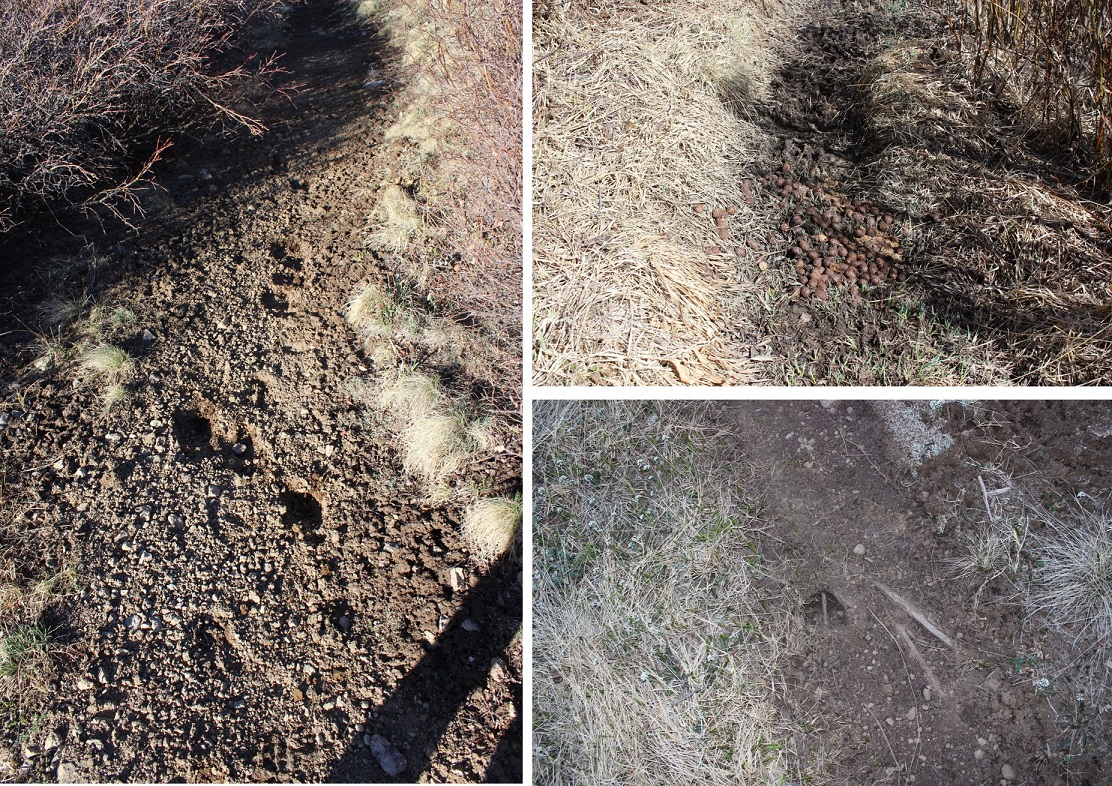 The trail was very easy to follow for most of this hike.  The only time it was challenging was when it crossed the creek and came back.  There were so many dead trees on the trail there wasn’t a clear path to follow.  It was obvious people had broken branches and climbed over logs to try to make their way back to the trail.  This will not be fun when the trees here get their summer leaves…

I exited the trees and was immediately deposited in the willows. 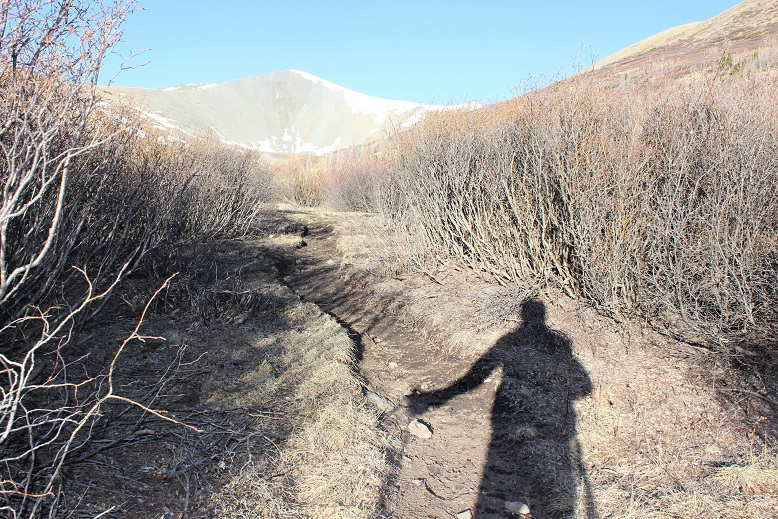 It was here I saw the moose.  Or, well, what I thought was a moose.  I only saw it for about half a second, bounding away from me.  It looked too light colored to be a moose, and I couldn’t tell how tall it was because I only saw it’s ears above the willows.  I walked around a bit to see if I could see where it bounded off to, but was unsuccessful.  I rationalized it was probably a moose, because elk don’t usually travel alone and I’d seen moose tracks.  I spent the rest of the hike wondering if I’d seen a moose or an elk.

Well, here I was in the willows, so I decided to try out something.  I teach outdoor survival skills, and I’d recently learned you can eat willow buds, the inner bark, and leaves (remember, this is in a survival situation:  in reality this doesn’t offer many calories, but when there’s no food, it’s an option).  I like to actually try out the stuff I teach people before teaching it if possible, so I took off a few buds in varying states and ate them. 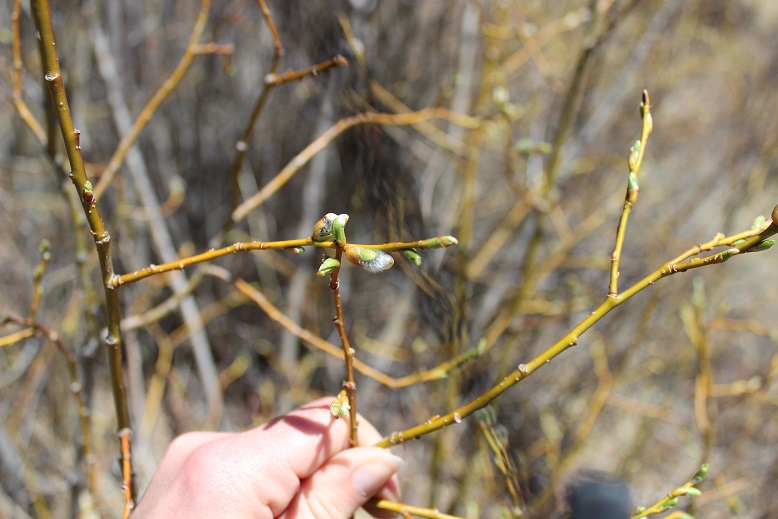 This is what I learned: 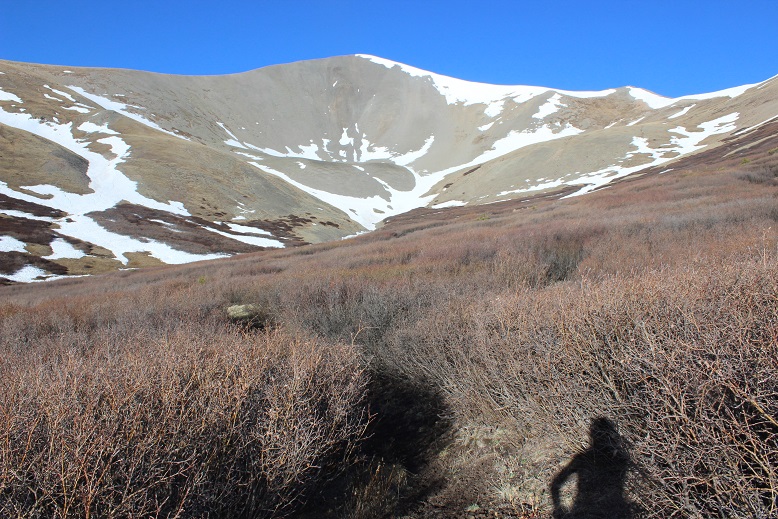 Back to the trail.  I looked ahead of me and saw what I assumed was the peak.  It wasn’t.  The actual San Luis Peak is behind this peak (which is unnamed because it’s not really a peak)

From here the trail had a little bit of snow in places.  It was consolidated and limited, and more of a minor annoyance than anything.  No traction (except shoes) needed.

Another shadowselfie because I do that kind of thing 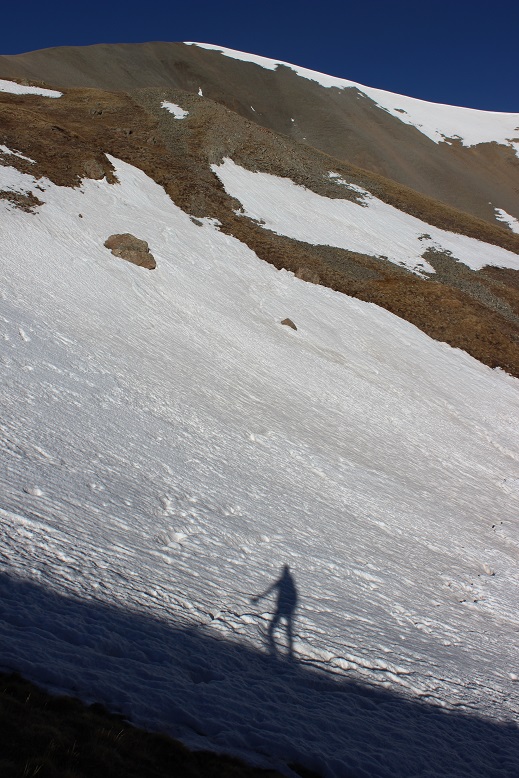 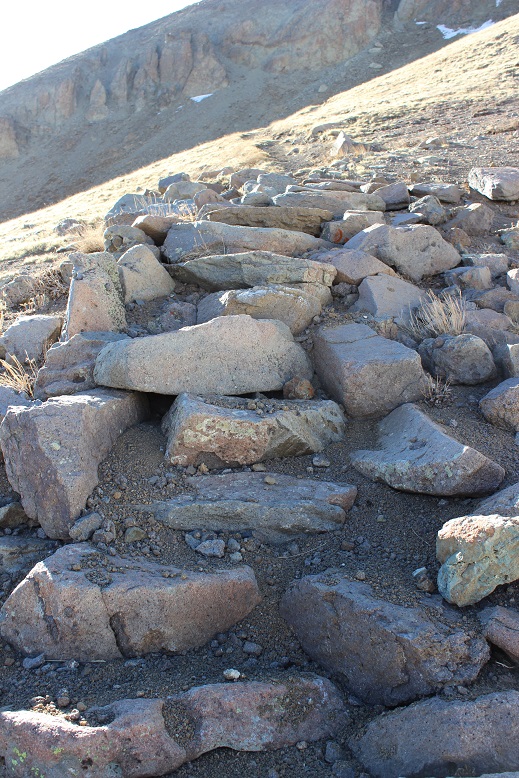 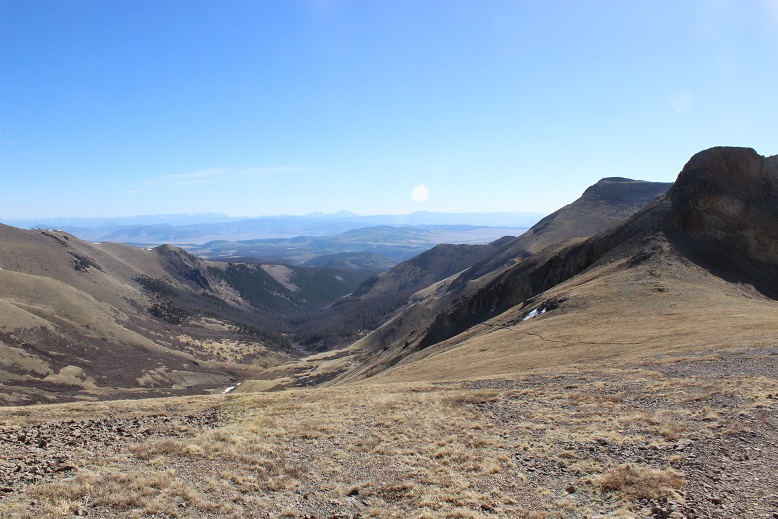 Ahead of me I could see the actual San Luis Peak.  The trail was very easy to follow, and full of talus. 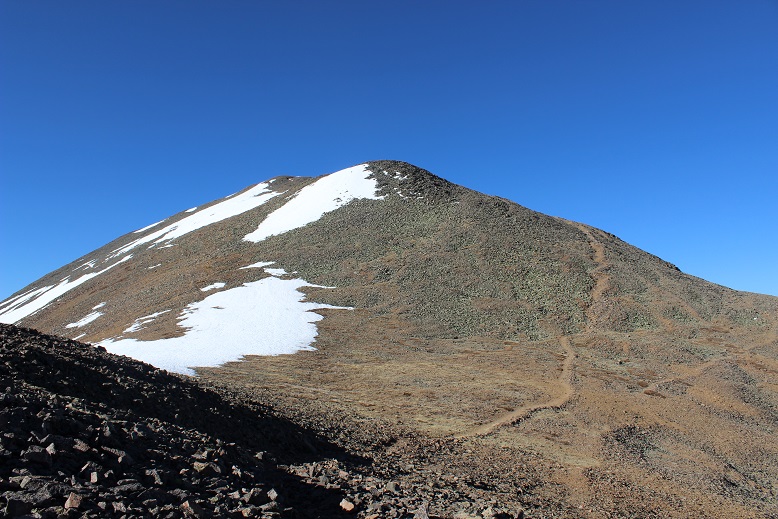 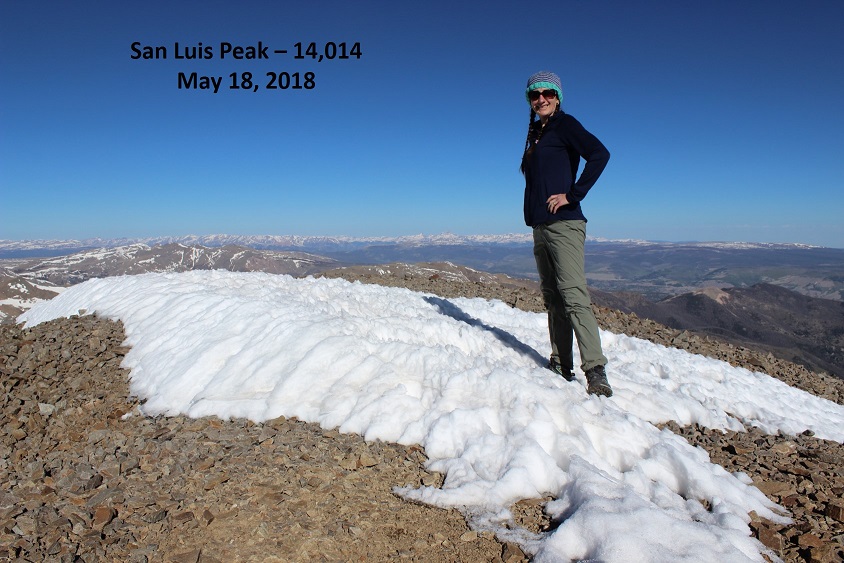 I love the summit marker!  So few peaks still have them. 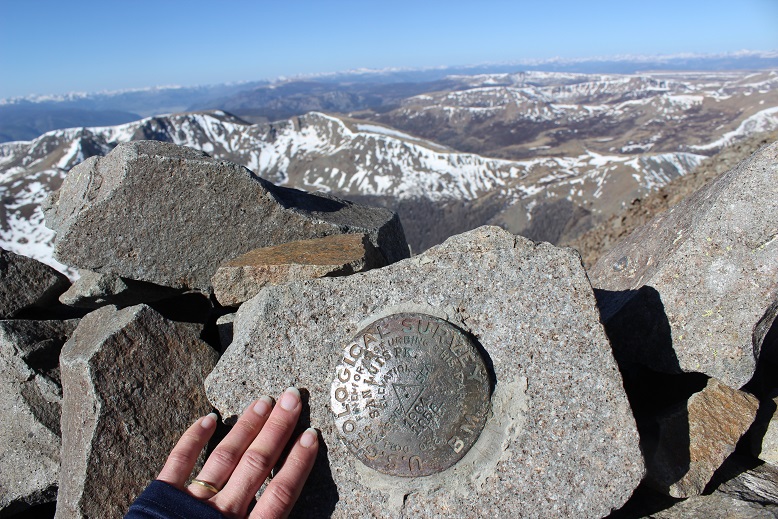 Video from the summit: https://youtu.be/wP-qS_WAG4Q

The summit wasn’t that cold, so I spent a few minutes doing yoga before heading down. OK, I stood on my head and balanced because I was the only one there and could.

When I was hiking down I looked up at that peak that looks like it’s San Luis Peak but isn’t, and saw something there that wasn’t before.  It was far away and I couldn’t quite make it out. It was either a person or a goat.  I hadn’t seen anyone else today, or any other vehicles, so I assumed it was a goat.  It was!  (Sorry it’s not a great pic… I was pretty far away when I took it). 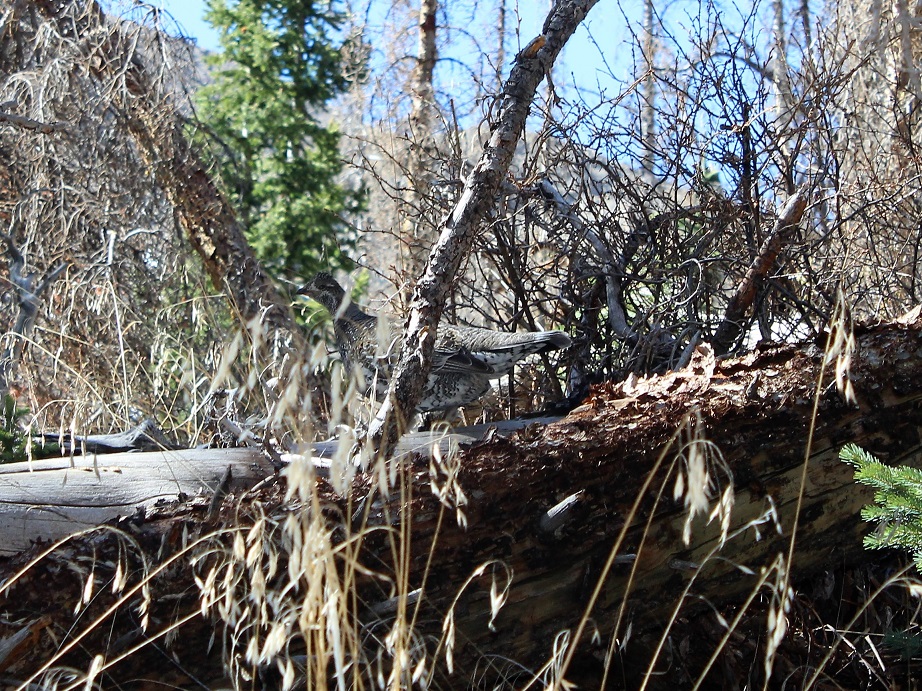 The entire way back I looked for that moose.  I was positive I was seeing moose tracks and scat, and this was the perfect area to see a moose!  Also, I didn’t want to be surprised by one.  I saw a grouse who didn’t like her picture taken…

And when I was exactly 3.3 miles from the trailhead I heard a rustling, looked up, and there she was!  A beautiful cow moose!  This was not the same creature I’d seen before.  She trotted over to the opposite side of the creek and tried to hide in the trees by shielding her face with a trunk.  I found this comical, as the trees did little to actually hide her. 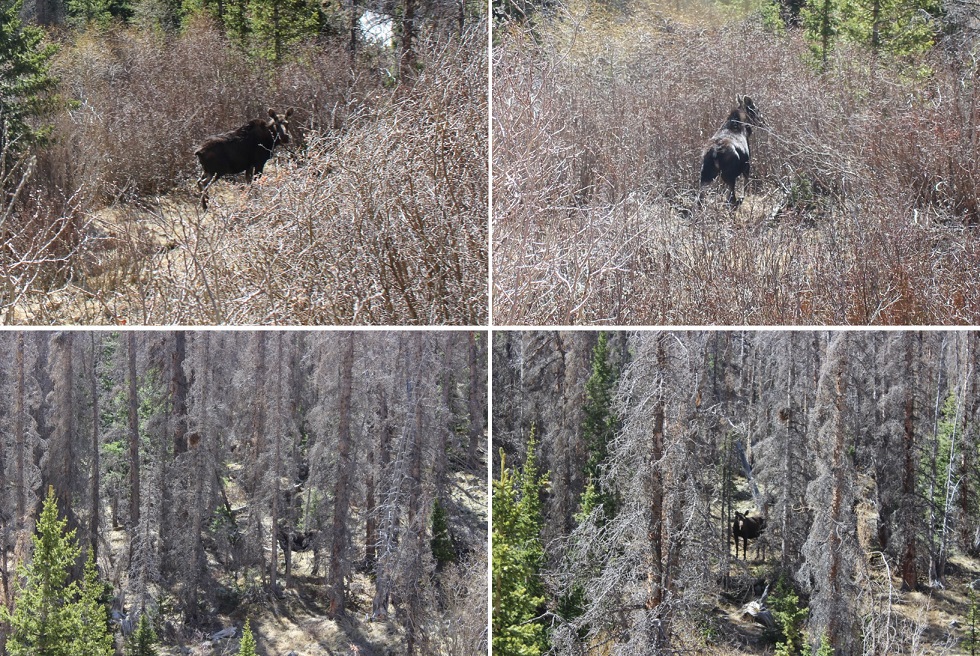 Without saying a word it was obvious we both wanted to adventure alone today, so we made a silent agreement: she’d stay on her side of the creek and I’d stay on the other. I let her win the staring contest. 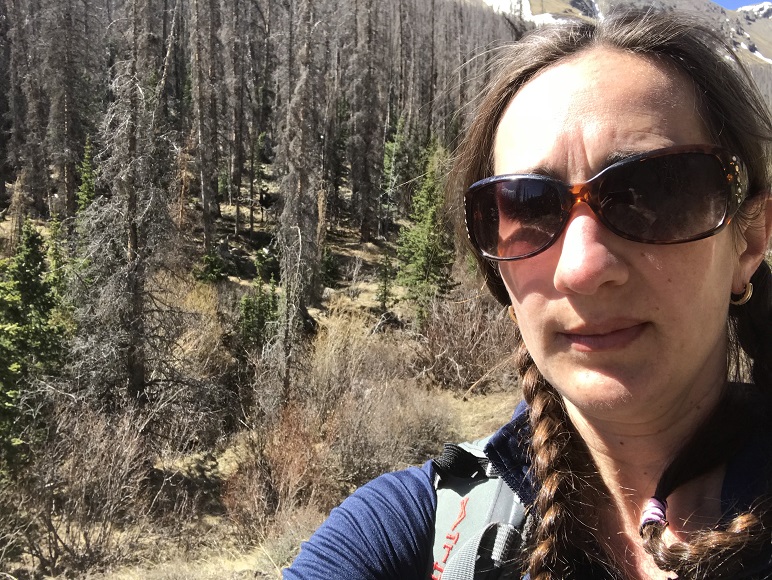 I did my best to steer clear of her, but was able to get a few photos and a quick video.  I’ve seen moose while hiking before, and I understand their body language.  If this was a fight or flight decision, this moose would definitely have chosen the flight option.  She was skittish and wanted nothing to do with me.  She watched me carefully until I was gone.  I thought it odd she didn’t have a calf and was obviously not pregnant.  She looked fully grown.

All in all it was a great hike today!  I made it back to my truck at 11am and checked my pedometer:  13.8 miles in just under 6 hours with lots of picture stops and summit playtime.  Total success!

I didn’t see anyone on the 27 mile dirt road drive out, so maybe no one knows the trailhead is open?  Oh, and my GPS stopped working on the dirt road and wouldn’t re-load, so I had to try and figure out directions in the daylight from the route I’d taken in the dark.  I had print directions, but they just didn’t seem right, so I didn’t use them and went by memory:  dangerous because I was very low on gas at this point.  I ended up choosing correctly, and made it to the Saguache gas station with about a gallon of gas to spare.  Next time I’ll fill up in Salida on the way to the trailhead, as apparently that’s the last stop for gas….

The San Luis Peak Summit Sticker can be found here