I really did’t want to write this one up because I made some amateur mistakes, but I also learned something, so here it goes…

My goal today had been 13er Centennial Hagerman Peak. I drove from the Cathedral Lake Trailhead and set my GPS to Geneva Lake, where the trailhead was supposed to begin.  Just after the small town of Marble (which had tons of marble statues on front lawns) the road became rough and honestly quite fun in my 4WD Tundra.  The dirt road was narrow, and I had to pull over a few times to let OHVs by, but all in all I was having a great time.

I came to a stream crossing and looked at my navigation. I was 5.5 miles from the trailhead.  Not bad.  Even if I decided to stay where I was and camp for the night I could still do the hike in under 20 miles.  Totally doable.  It’s important to note at this point I had no signal, so I was just going off this picture of my location (which rotated as I drove). 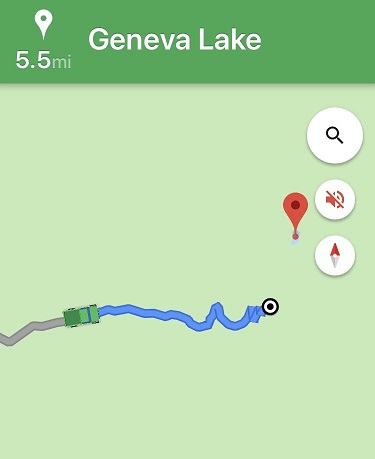 As I sat in my truck eating dinner (I’d found a Subway on the drive in) I watched several vehicles attempt to cross the creek.

The water was just to the top of most of their wheels. The OHVs were lower to the ground and thus their occupants got soaked.  The vehicles did just fine crossing though.  I watched a GMC truck get stuck, but after some back and forth action it was able to get unstuck.  Then I saw an F150 cruise across the stream and thought “My truck can do anything those trucks can do and more” so I put it in drive and crossed the stream, no problem.

About a mile and a half up the road began to get rough. I’m talking closed upper south colony lakes trailhead rough (the part you can no longer drive on).  My truck was handling just fine, but huge boulders and water were increasing on the trail and there weren’t many (any) places to turn around, so I used a switchback to reverse my course and ended up parking back at 9960’.  I was pleased with this spot, as I was now 4.2 miles from the trailhead.

I got out my topo and did my best to guestimate where I was on the map. Unfortunately I was pretty sure I was currently “off map” at this point, but figured I was about here (red x). I realized later I was indeed correct in my assumed location. 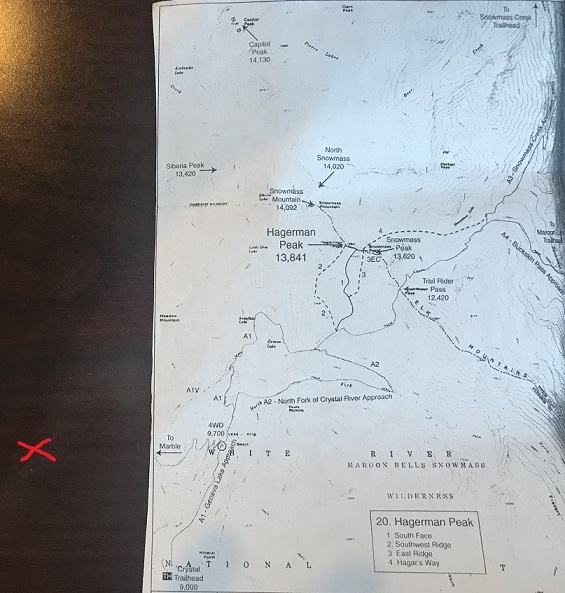 Had I had a better topo or cell service I would have realized my mistake instantly, but going off of what I had I was sure of my current location (and actually, I was). I just needed to follow the 4WD road to the trailhead and I could pick it up from there.  I had several great topo maps that started at the trailhead, as well as a pre-loaded GPX file.  I spent the next 15 minutes or so going over the route again, and calculating how much elevation gain I’d add from starting from my current location. It looked like an extra 700’ each way, so no more than 1500’in total.  I was willing to live with that.

I made it an early night and woke up at 10:30pm to start my adventure. I was on the road by 10:50pm.  It started out easily enough:  I just followed the 4WD road.  I didn’t think to take out my map (etc) because I was just following the road.  After about a mile the snow started, and it was obvious no vehicle had been in this area yet this year.  Hmmm.  That was curious:  I saw a conditions report from last week stating it was snow free to the lake.  I should have stopped and reassessed here, but if I had I wouldn’t be telling this story.  Also, some people lie on conditions reports (it’s happened before).

I continued on and thought to myself “Wow! This sure does feel like more than 700’ in elevation gain! I must still be sore from yesterday.”  There was a full moon out but it was obscured by the trees.  I kept following the road through increasing snow until the road just stopped.  That was curious.  It just ended and there was no trail to hook up with it. There was supposed to be an obvious trailhead… and I’d never decreased in elevation.

I took out my phone and looked at the picture I had of where I was going, and then looked at my tracks so far. It sure seemed I was going in the right direction.  At least my tracks looked similar to the route description. The trail must hook up here somewhere close. I got out my GPS track and yes, it looked like I just had to head in that direction and I’d make it.  The problem was ‘that direction’ led me over a cliff.

I kept scouting around and found what looked like fresh tracks. Awesome!  Someone had been here after all.  I walked over to them and noticed the tracks were from a mama bear and cub, and yes indeed they looked fresh.  That did it.  I was turning back and heading back to my truck.  I did not feel confident continuing in the direction I was going, and I was sure something was wrong with my navigation (I just wasn’t sure what I’d done wrong).

I followed my tracks back to my truck and made it back a little before 1:30am. Drat.  It was too late to drive somewhere else and start another hike.  The day was shot.  What really stinks is I lost an entire day of potential hiking.  I decided to drive back home and figure out where I went wrong.  On the positive side I was the only one on the 4WD road at 1:30am, so I didn’t need to move over for any passing vehicles.

OK, so here’s what I’d done wrong: I followed the orange line, when I was supposed to follow the red line.  Note:  the orange trail hadn’t been on my map, so I didn’t even know it had been an option.  I just figured I was following the same 4WD road.

But if you look at my tracks, they do look pretty similar when you rotate them (which was what was happening as I was hiking) 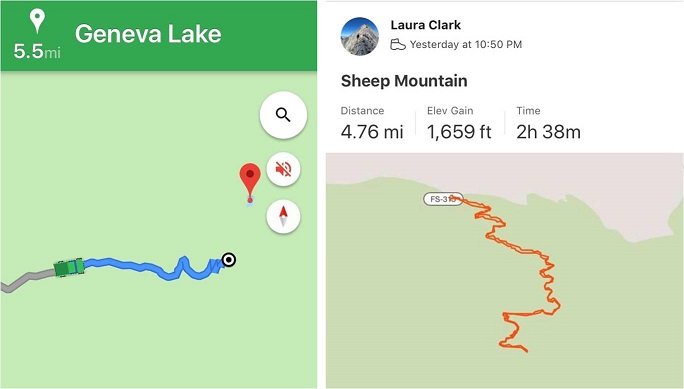 On the positive side, I ended up unknowingly summiting Sheep Mountain, a ranked 11er, so there’s that. Also, I got in 1659’ in elevation gain (see, I knew I’d gained more than 700’).  So, lesson learned.  Have topo maps that cover the approach in, even when it’s on a road.  I’m going to have to attempt this one again… luckily it’s only a 5 hour drive.