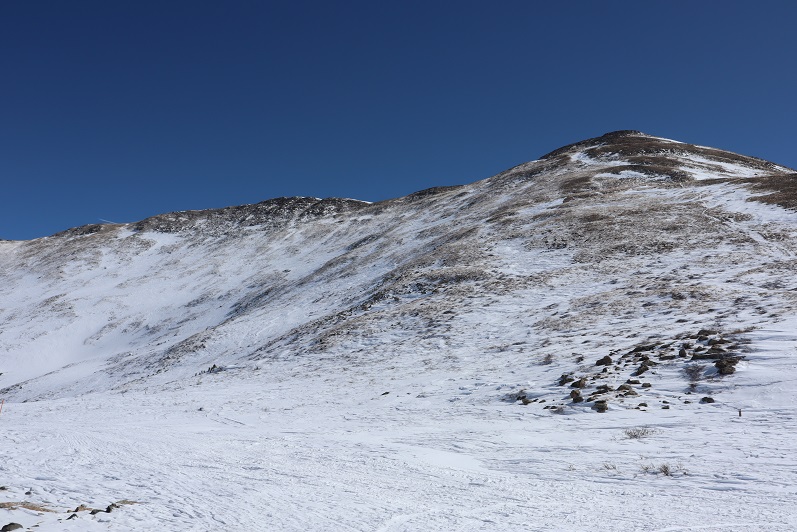 I absolutely needed to get above treeline today: the past few weeks has been a whirlwind cookie season, limiting my availability to hike, and the weather hasn’t been cooperating on the days I’ve had available so I’ve been highpointing instead closer to home. Also, today is a leap day and I’ve never had a leap day summit. So I did what I always do and checked the weather forecast for about 10 peaks and chose the one with the best forecast.

The road to St Elmo is mostly dirt and (thankfully) well plowed. A 2WD vehicle could easily have made it to the trailhead. 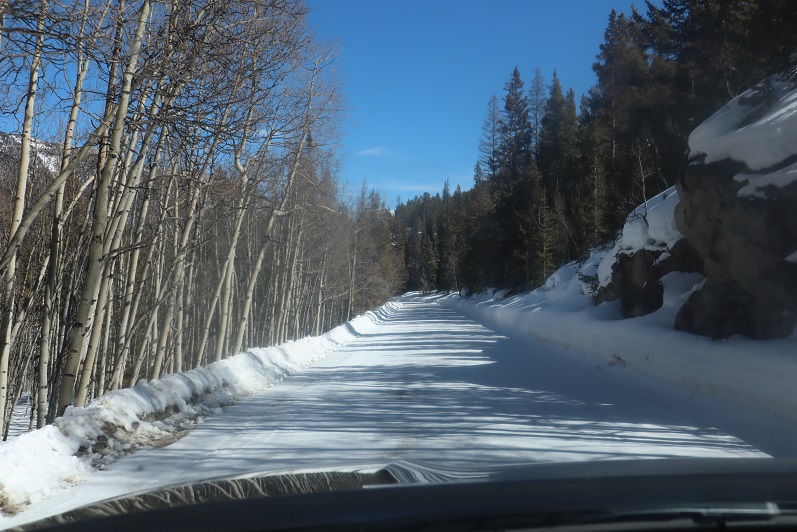 I arrived around 4:30am and drove through town looking for a parking space. No luck. The streets were plowed but because of the snow there was nowhere to park, so I ended up turning around (twice) and parking near the east end of town in a lot that looked reserved for trucks pulling trailers. I was the only vehicle in the lot when I arrived.

I gathered my gear and was on the road by 5am, turned and headed back to make sure I’d turned off the dome light in my truck, and started off again. Almost immediately a Bobcat ran across my path, doing it’s best to run away from me as fast as it could. I considered it a good omen. It was a bit eerie walking through a ghost town at night, and with all the snow you could tell which houses were occupied and which ones had residents who went somewhere else for the winter. Every building had a sercurity system flashing a red light every few seconds or so.

At the end of town I turned right onto 162E and then left after the bridge and followed the signs towards Tincup pass. It’s 6miles from here to the pass. 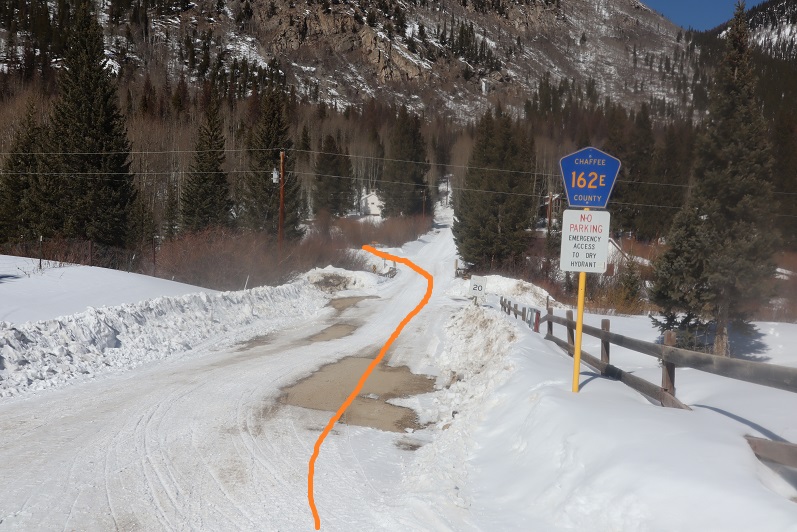 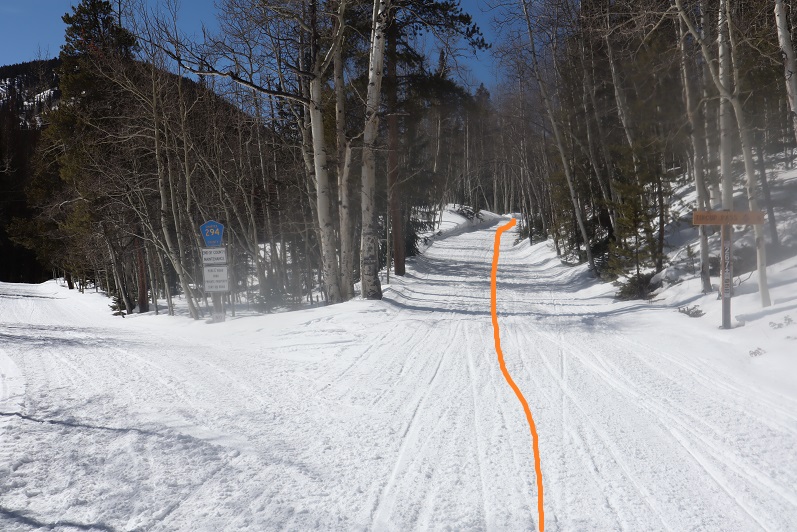 The road was nicely groomed and looked like it had a lot of snowmobile activity. I spent my time hiking fantasizing about the new truck set up I’m working on for Spring/Summer (same truck, new setup). Embarassingly I jumped a few times at noises in the night, just to realize it was the sound of an invisible (snow-covered) creek or a tree about ready to fall. My original intent was to leave the trail and summit Point 13,050 and traverse the ridge over to Tincup Peak, but it quickly became obvious that wasn’t going to happen today: the snow wasn’t going to cooperate. There were several sections where I could tell snowmobiles had gotten stuck in the snow and had to be pulled out after leaving the road to head north (the way towards 13,050). So instead I followed the road slightly southwest for 4 miles, until I came to a trail junction. I could also tell the weather wasn’t going to be as sunny/calm as originally forecasted. The winds were only supposed to be 5-10mph here today, yet I could tell by the sounds the trees were making the wind was much more intense. Several times I heard wind that scared me into thinking I was hearing an avalanche. Tons of fun! 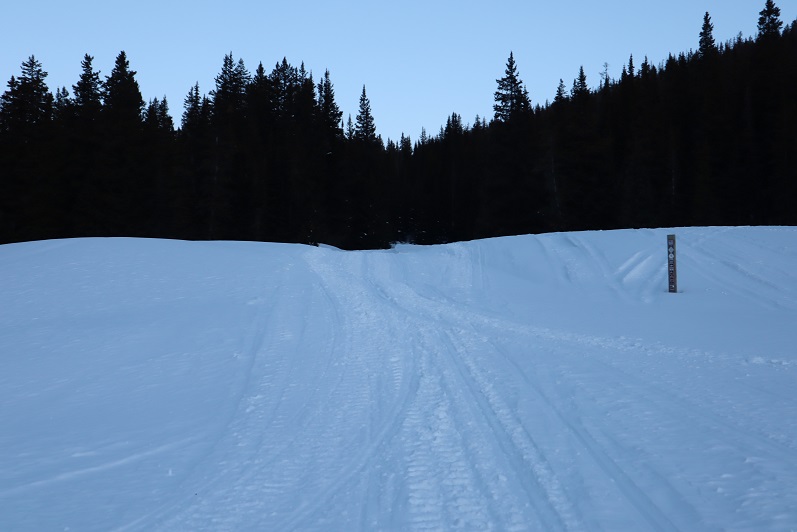 I continued straight (northwest) and followed the trail until I made it out of the trees. 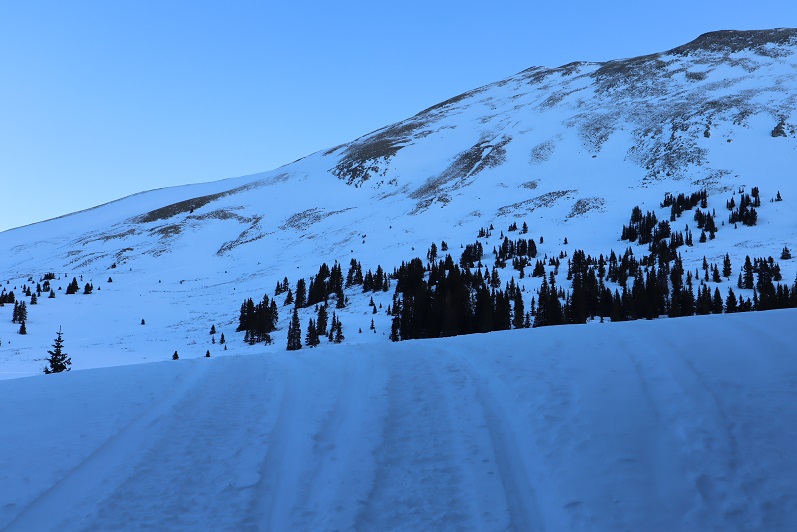 From here I followed orange poles to Tincup Pass. Here’s the basic route: 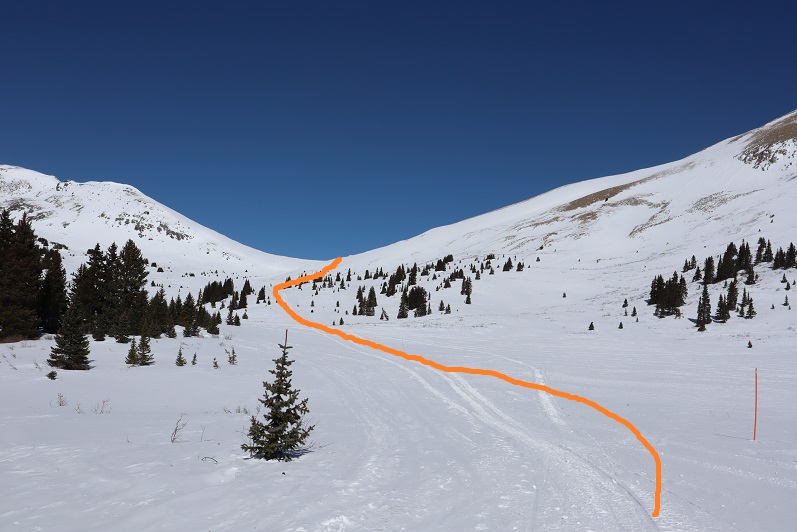 At about this time I couldn’t feel my toes/feet anymore, and it felt like I had two half-dollar sized rocks under the balls of my feet. I wasn’t cold, I was just having a Raynauds attack and decided to just keep pushing on: they usually only last about half an hour or so, and as long as I keep moving everything ends up fine. Here’s the last section up to Tincup Pass 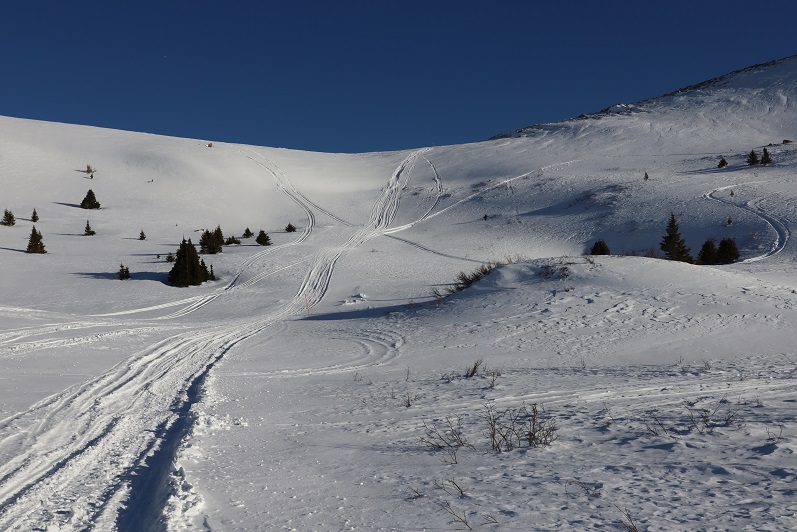 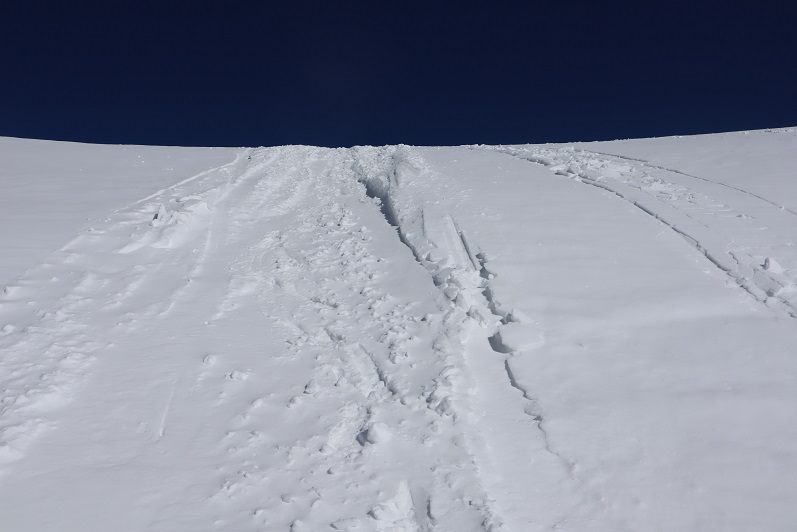 It’s steeper than it looks but honestly short and not too bad. Tincup pass is located at 12,154′

I turned right (east) and headed up the side of Tincup Peak. Here’s the route I took, doing my best to avoid the areas covered in snow (after postholing too many times to count):

About a quart of the way up the wind picked up fiercely. I hadn’t put on a balaclava this morning because it hadn’t been windy when I’d started, and now the wind was so intense I couldn’t get it on (well, I might have been able to, if I took off my gloves). The winds were forecastd at 5mph, but there were several times when I had to turn my back to the wind and brace myself to remain standing. Not for the first time I told myself that when the forecast looks too good to be true, it probably is. I made it to the top and took a look around what I thought was the summit: there were cairns and a windbreak.

The wind was extremely intense here. I still couldn’t feel my feet but I wasn’t cold, and I knew taking off my gloves would be a terrible idea in all this wind, but my face was starting to hurt from the constant abrasion of the wind. I crouched down behind the windbreak and clumsily put on my balaclava wearing just my glove liners, and then hastily put my gloves back on. It was here I noticed I was not at the summit of Tincup Peak. The sumit was actually to the north about another half mile or so. 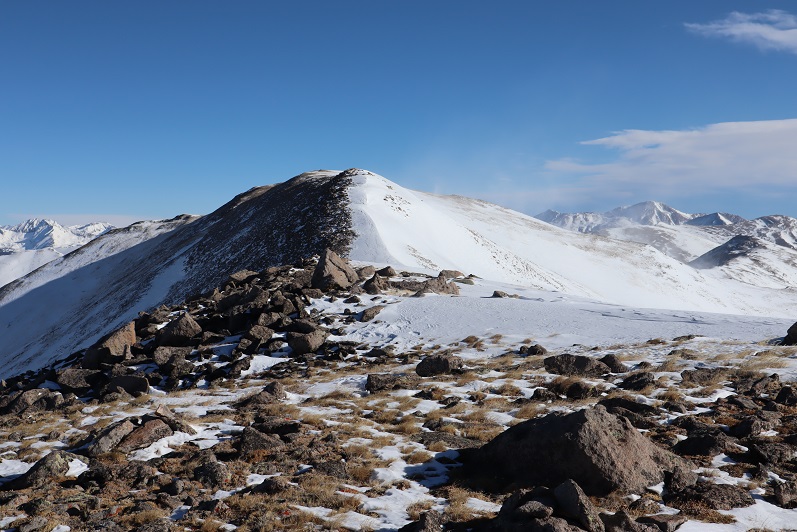 Ugh! It didn’t look like to difficult a trek, but that wind was insane! And I still couldn’t feel my feet. I did a mental calculation and decided I wanted to go for it, so I headed north. The wind only knocked me down twice. From the small saddle here’s looking back at the way I came

and at the peak before me (spoiler alert: another false summit)

The snow on the last part here was soft enough to twist an ankle, so I tried to stick to the rocks where possible.

At the top of this hill I was disappointed to find I still wasn’t at the true summit, but determined to press on: I was too close NOT to summit at this point. So I kept going.

This last little stretch was still windy, but luckily not technical in the least. I also had a great view of PT 13,050 and the connecting ridge that I filed away for next time. I was so glad I’d decided against taking that route up today!

I summited and tried to take a summit photo but the wind kept knocking the camera (and me) over. I was finally able to get one shot while bracing myself against the wind 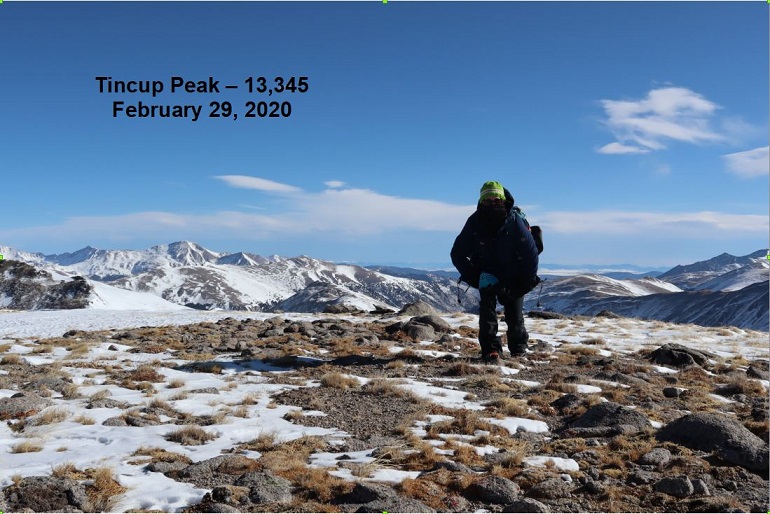 It was a quick decision not to attempt Emma Burr Mountain today: That wind was just too much and I still couldn’t feel my feet (I was getting worried now). I told myself I’d be back to get PT 13,050 and Emma Burr together another time. Here’s looking at Emma Burr Mountain 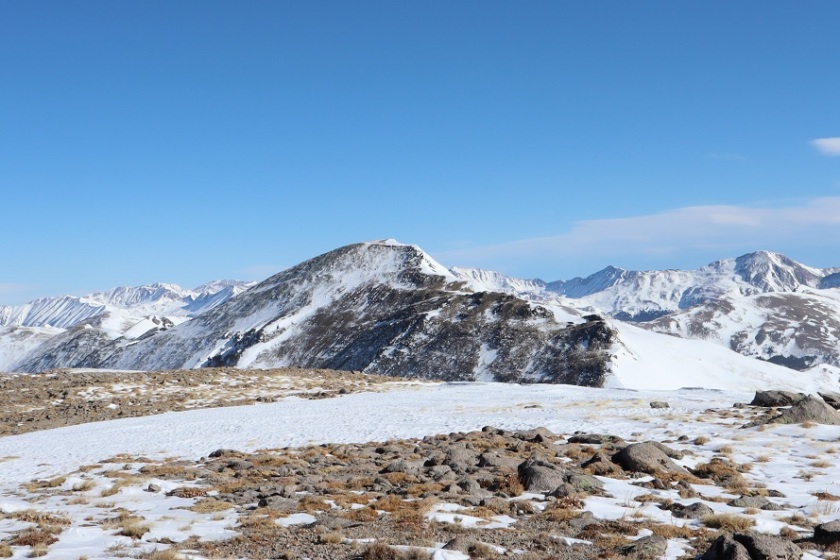 Time to head back

Here’s the path back to Tincup Pass

It was easy to avoid the cornices 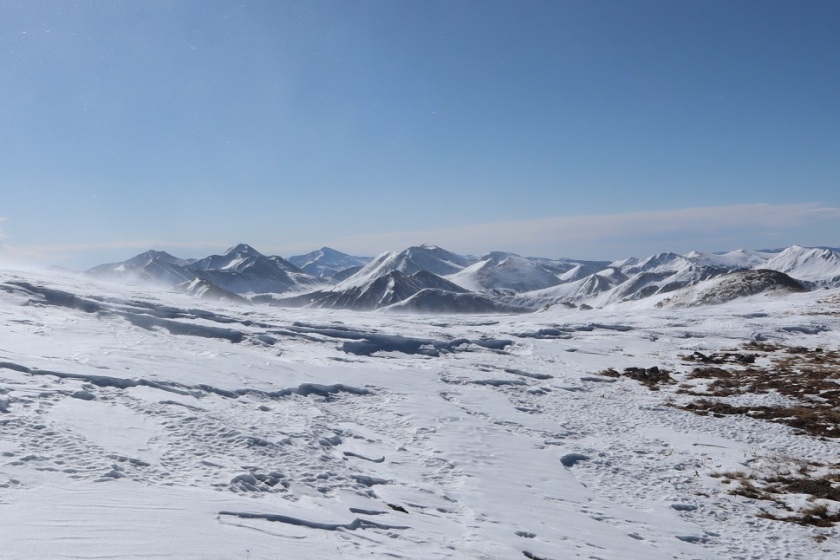 And straightforward to Tincup Pass

The wind didn’t die down until I was in the same place where it had started. I made it to Tincup Pass and decided to take a selfie (my son took one here a few years ago when he was here with his Boy Scout Troop and I wanted a similar one to show him).

Here’s the trek out of the basin. I was surprised I hadn’t see anyone all day, considering it was a Saturday. The basin was empty: There were tons of fresh snowmobile tracks, but they were all from yesterday.

The wind died down as I made it back into the trees, and I was finally able to feel where my feet were. There was about half an hour of intense pain as the blood started to flow again, but I kept walking, knowing stopping to take off my shoes (etc) was a terrible idea.

The 6 miles back to St Elmo seemed long, but as I was just walking on a groomed road not to terribly difficult. Snowmobiles started passing me at alarming speeds, and a few times I had to jump out of the way and into a snowbank to avoid getting run over.

St Elmo was beautiful with the snow, and just as wonderful as in the summertime, except of ourse the chipmunks were now hibernating.

I made it back to my truck at 12:30pm, making this a 14.5 mile hike with 3590′ of elevation gain in 7.5 hours. There were several trucks hauling snowmobiles when I got to the parking area, and it looked like there were a ton of people about to snowmobile into the basin. I counted dozens of snowmobiles and just as many people walking around the town. I totally needed my time above treeline today: I felt energetic and excited and not the least bit tired. Being in the mountains seems to rejuvenate me. Time to head home and pass out come more cookies! 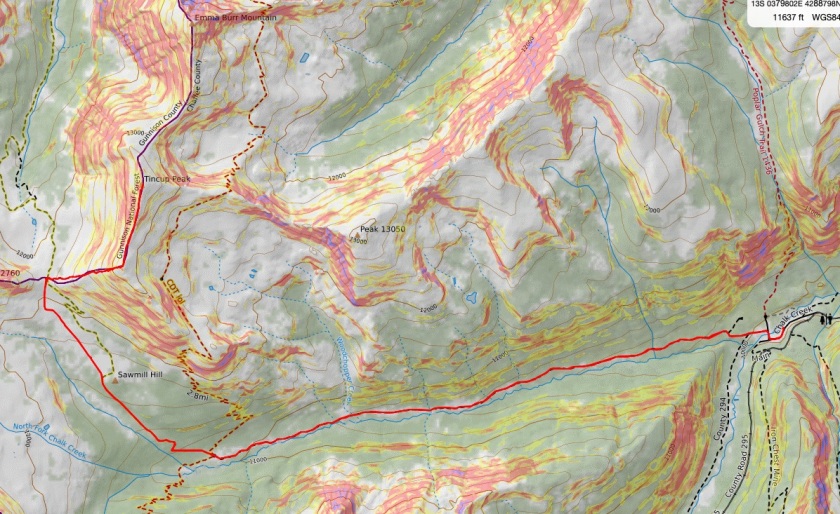