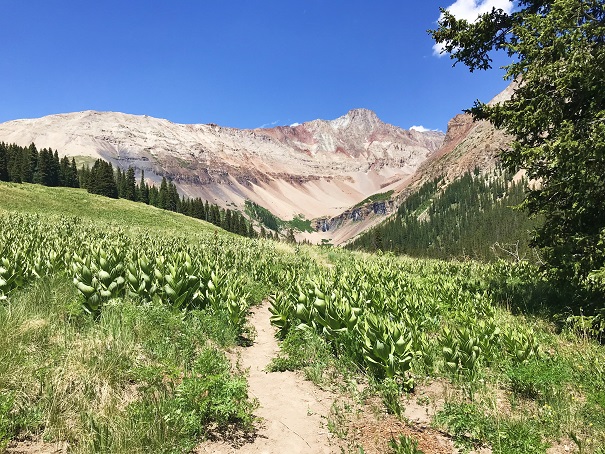 It’s 7:30pm on Saturday night, and I go downstairs to find all 3 of my teenagers hanging out in my youngest daughter’s room. My son is sitting in a chair in the middle of the room serenading everyone, trying to figure out how to play a Bruno Mars song on his accordion.  My oldest has her laptop in her lap, and my youngest has her headphones on (but takes them off when I enter the room).

The kids ask me why I’m not driving to the trailhead? Didn’t I have a long drive and hike ahead of me tomorrow?

Me: Well, you see yesterday I saw a really big bear when I was coming home from hiking.  A really big bear.  I didn’t realize we had bears that size in Colorado!  I’m stalling because I don’t really want to hike solo in the dark for longer than I have to with bears on my mind.

My son: I thought you talked to us yesterday about not letting other people’s fears dictate your hikes?

Me: Yes, but currently, this is my fear.

My oldest: But you’re not hiking the same mountain, right?

Me: You’re right!  Hey, I’m not even hiking in the same mountain range.  Thanks!  I’m out!

My oldest knows how I think, and knew just what to say to get me moving. I’ve hiked for miles and miles in the dark solo dozens of times, but for some reason seeing that really large black (cinnamon colored) bear yesterday kind of freaked me out.  Sure, it was running away from me, but it wasn’t the smallish black bear I’m used to seeing.  I encountered it during the day, but it’s not something I’d like to repeat at night.  I know I’ll get over it after a time or two of hiking at night again; the experience was just still fresh in my memory and didn’t sit well.

So I drove the 6.5 hours to the Kilpacker trailhead. Quick note: the driving directions given on the dot com  are correct, but I misinterpreted them.  The instructions said to drive to Lizard Head pass and continue south.  So when I got to Lizard Head Pass sign I turned south into the lot, thinking this was the pass, and looked for a route south.  This wasn’t the pass, and I circled the parking lot twice looking for it.  It was dark and the road was a half loop, leading to other trailheads and me to believe I was missing the turn off.  I figured I must have missed something?  Nope, there was no turn at Lizard Head Pass:  just continue driving when you see it and don’t go into the parking lot (unless you need to use the restroom, because they have one there and not at the trailhead).

The 2WD dirt road in was a bit narrow in places, but easy to navigate. I put my truck in 4WD because I could, but it wasn’t necessary. 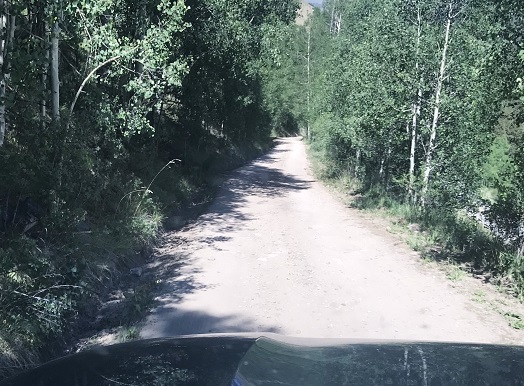 I signed the trail register at the well marked trailhead and started my hike a little before 4am. In the dark.  Here’s proof:

The first 5 miles of this hike are really easy. Very little elevation gain (in fact, you lose more than you gain it seems, which stunk on the way out) and no real challenges.  That is, if you put aside the fact when you hike in the dark your sense of hearing intensifies and every shadow becomes a mountain lion/bear/rabid squirrel coming at you at full speed.  About 2 miles in I heard a large pine tree fall 20 feet in front of me on the trail, which was a first for me (but it’s gotta happen a lot, right?).

I came upon the stream crossing and it was more difficult than anticipated. You see, when I came upon it in the dark I saw a broken log in the water, with no way to cross.  I walked up and down the banks a few times until I noticed an in-tact tree that was easy to cross.  It’s one of the fun challenges of hiking at night!  (I had a GPS but it wasn’t helpful in this situation, as it showed the crossing far from both logs, in a place where there were no logs).

So, how did I deal with my bear thoughts? I diverted my mind to a speech I’m writing for a presentation I’m giving next week at a conference on sensor technology, tapped each and every log and large rock I passed with my trekking pole to make noise, and said “Hey Bear!” more than I have in years.  It worked, because I didn’t see any animals (which was also kind of a downer because I actually like seeing animals when I hike).

The route was very well maintained until I reached the basin. 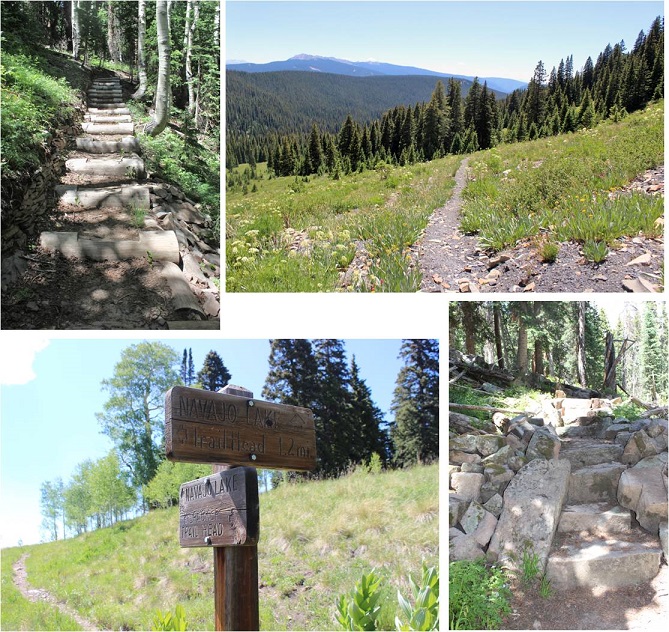 I reached the basin just as the sun was coming up. This was a very large basin filled with a lot of talus.

From here the route wasn’t difficult to follow, but everything looked the same, making cairn finding a fun game. 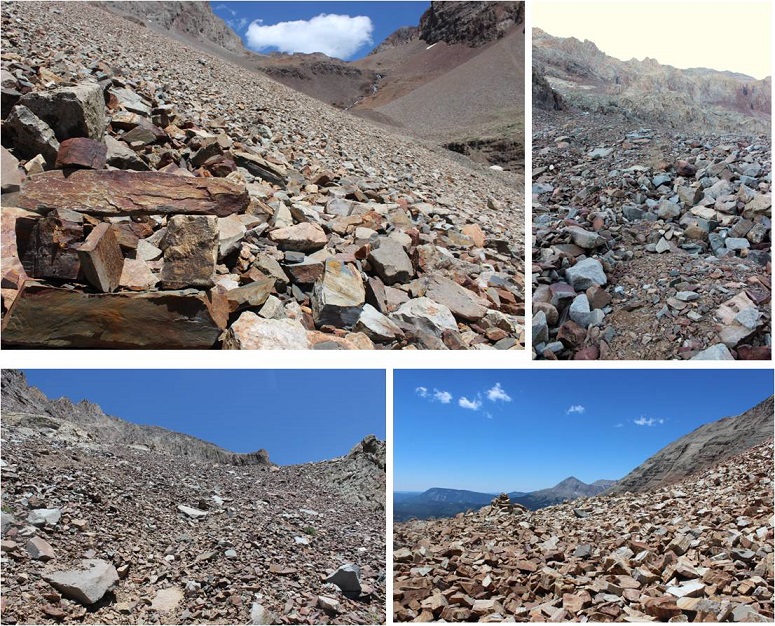 I never did see the cutoff for El Diente because I wasn’t looking for it. I was focused on route finding for Mt Wilson, but here it is (I found it on my way back down).

I left my trekking pole near a large rock, fully expecting a marmot or pika to destroy it (it’s time I got a new one anyway). 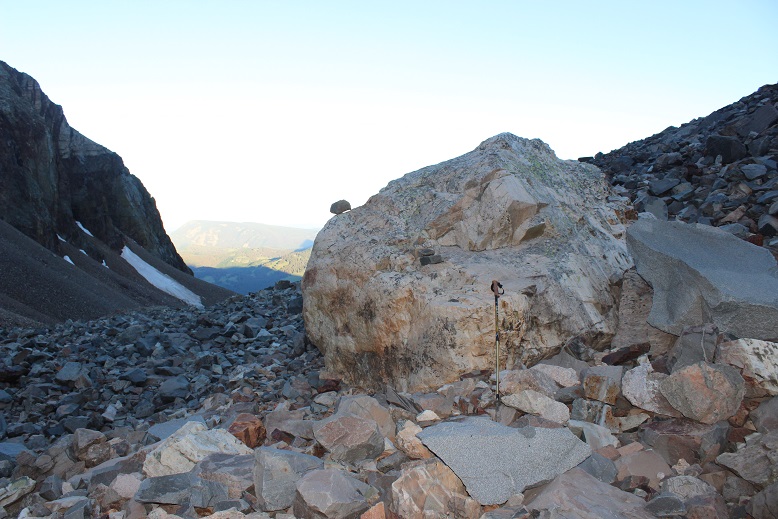 I chose to do Mt Wilson first because it’s further and there was a chance it would have snow. I wanted to get the snow part of the hike done in the morning before the snow softened.  The jury was still out on the traverse.  After hiking through miles of talus I came to a drainage area with larger rocks.  I could see a snow free line to where I needed to go so I didn’t put on my crampons and spent the next hour and a half carefully hopping from rock to rock up the drainage.

Once I made it to just below the gullies below the summit it was much safer for me to put my crampons on, so I did, and left them on until I was about 150 feet away from the summit (when rock climbing became necessary).

Here’s the route I took (I’m using the photo from 14ers.com because mine don’t have this great of a perspective). 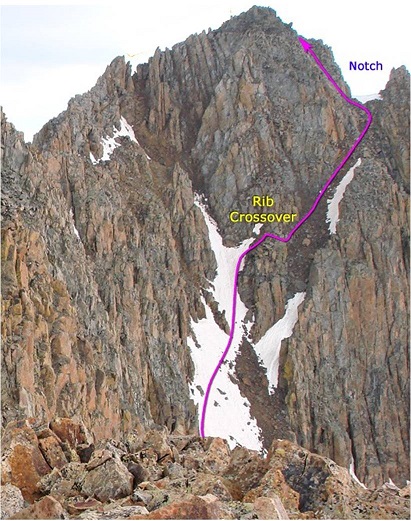 After making it to the notch rock climbing was necessary. Yes, it is important here to look back at the way you came.  You’ll be surprised at how different it looks from this perspective!!! 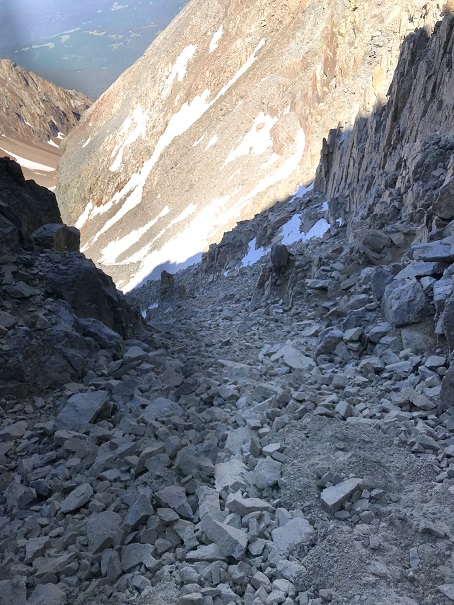 There was one class 3 move 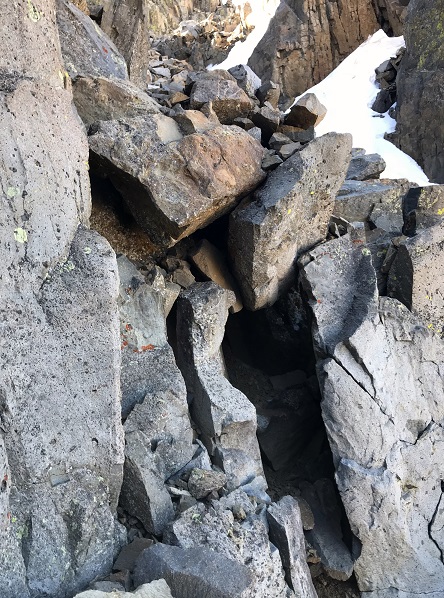 Wow! What a beautiful day for a summit!

I took a summit selfie, a summit video, and was back on my way. 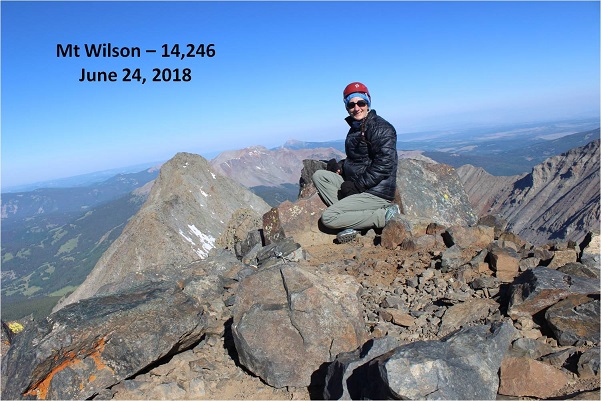 This time I put on my crampons for the gully and kept them on as I was descending most of the basin, straight down the snow. Wow!  What a difference from hoping rock to rock!  This was so much easier!  I wished I’d have done this on the way up:  I’d have saved quite a bit of time. 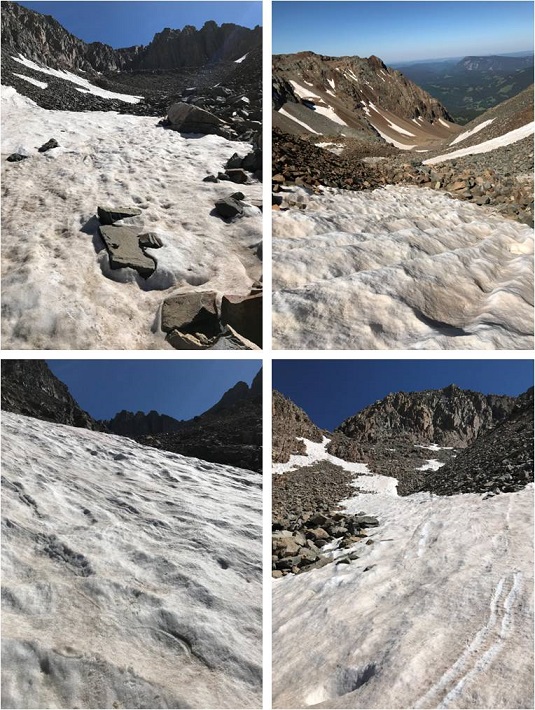 Now it was time to head over to El Diente. I’d made the decision I wanted elevation gain today, and the best way to do that was to descend Mt Wilson and climb El Diente instead of doing the traverse.  Also, I didn’t have a map or instructions for the traverse with me and this seemed like a safer option, even though the traverse was snow free.

The pink “v” is what you’re supposed to do if you hike each peak separately, but I found an established cairned route and took the blue line. 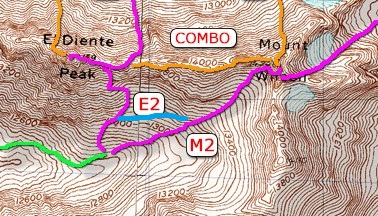 I still looked for and traversed the rib, but I took a route from the west instead of the east. 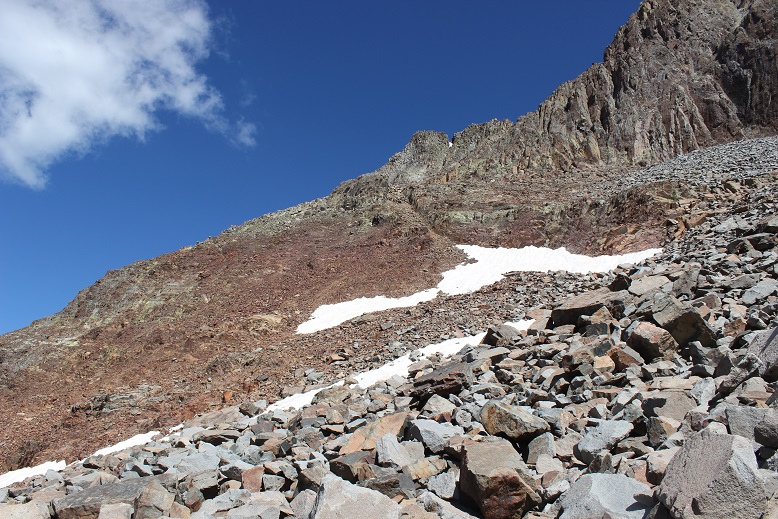 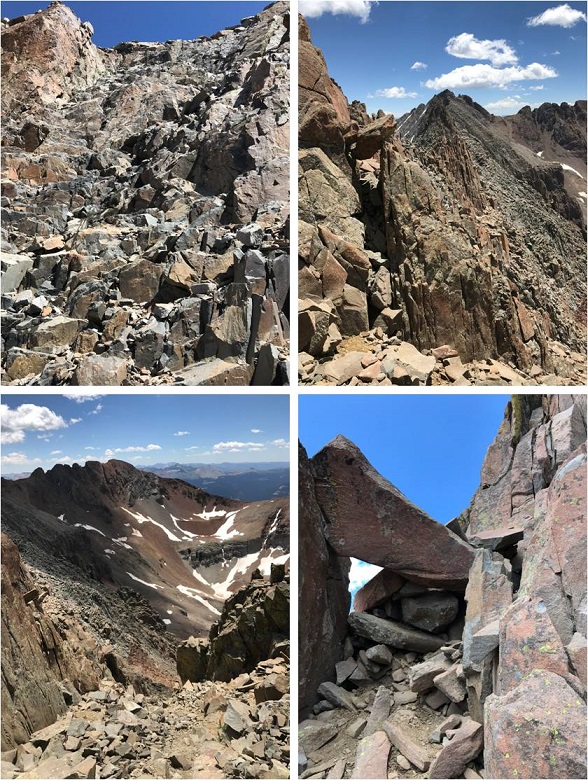 After gaining the ridge I actually moved from the south side and traversed the north side of El Diente. The north side had some snow directly on the route, but it was easily navigable.  Here’s a picture looking back at the north side part of the trail and also of the traverse. 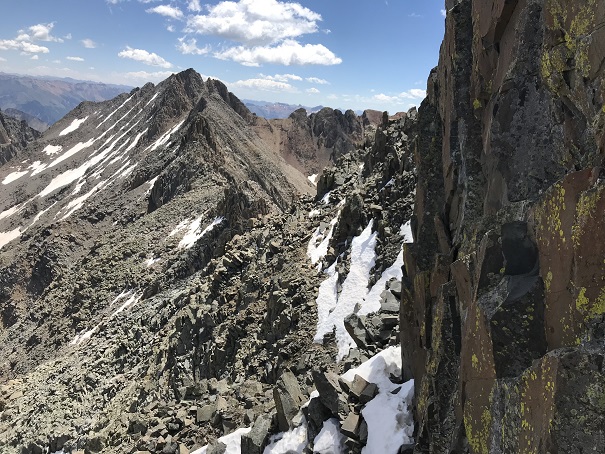 Here was the crux of the climb for me: I rounded the corner and since there was snow on the direct route from this point on I made a few class 4 moves to gain the summit. (It’s a steeper climb and those rocks are larger than this picture makes them look). 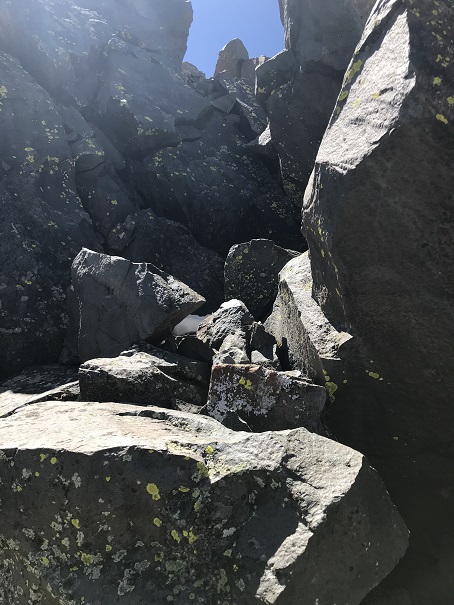 I couldn’t tell where the exact summit was. My GPS kept switching between points, and some were obviously not the summit (it was doing this for the north and south side of the mountain too, which was frustrating).  There was no summit marker so I just stood on multiple high points on the ridge, just to be sure I hit the ‘actual’ summit.  The high points were quite narrow so this picture is closer than I’d have liked. 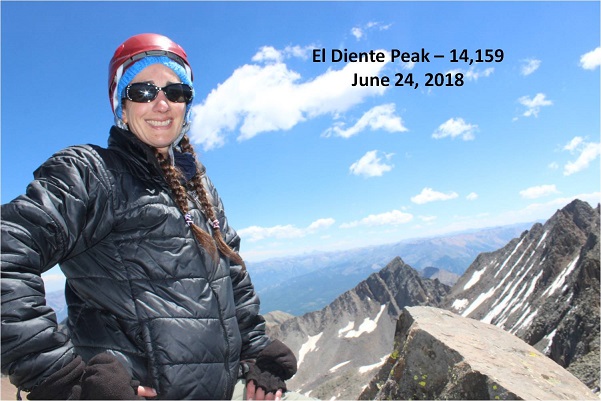 Take a look at that ridge heading back to Mt Wilson!

I was much more confident on the way back down El Diente. Both of the climbs I did today were completely within my abilities.  They were fun, and while there was exposure I wasn’t scared at all (not even much of an adrenaline rush).  These routes seemed very similar to the Mt Sneffles ridge route.  The only downside?  The talus!  OMG, that stuff didn’t quit!  Talus stinks to hike in because all of the rocks are of irregular size, none of them are stable or large enough to securely put your foot down, and they cause you to slide when hiking downhill.  It’s hard on the knees and impossible to hike down fast without slipping.

The only good thing about talus? It’s gorgeous to look at!  I found several pieces that looked like they contained fossils of plant material.  I left them there for the next hiker to find. 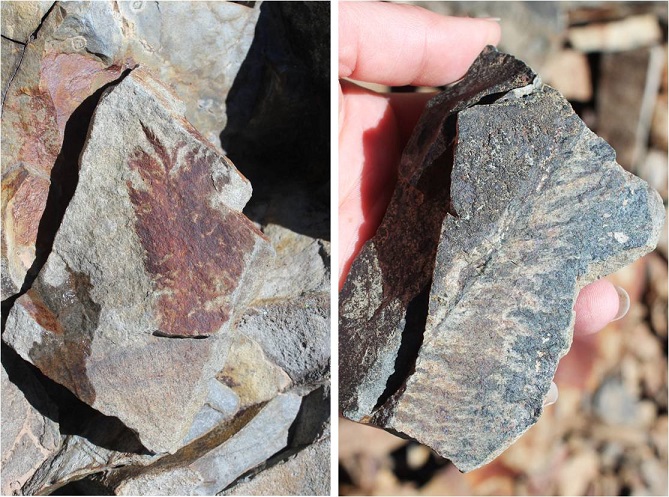 On the way back down I was able to see flowers that weren’t visible in the dark. Absolutely stunning!  Pictures don’t do them justice! 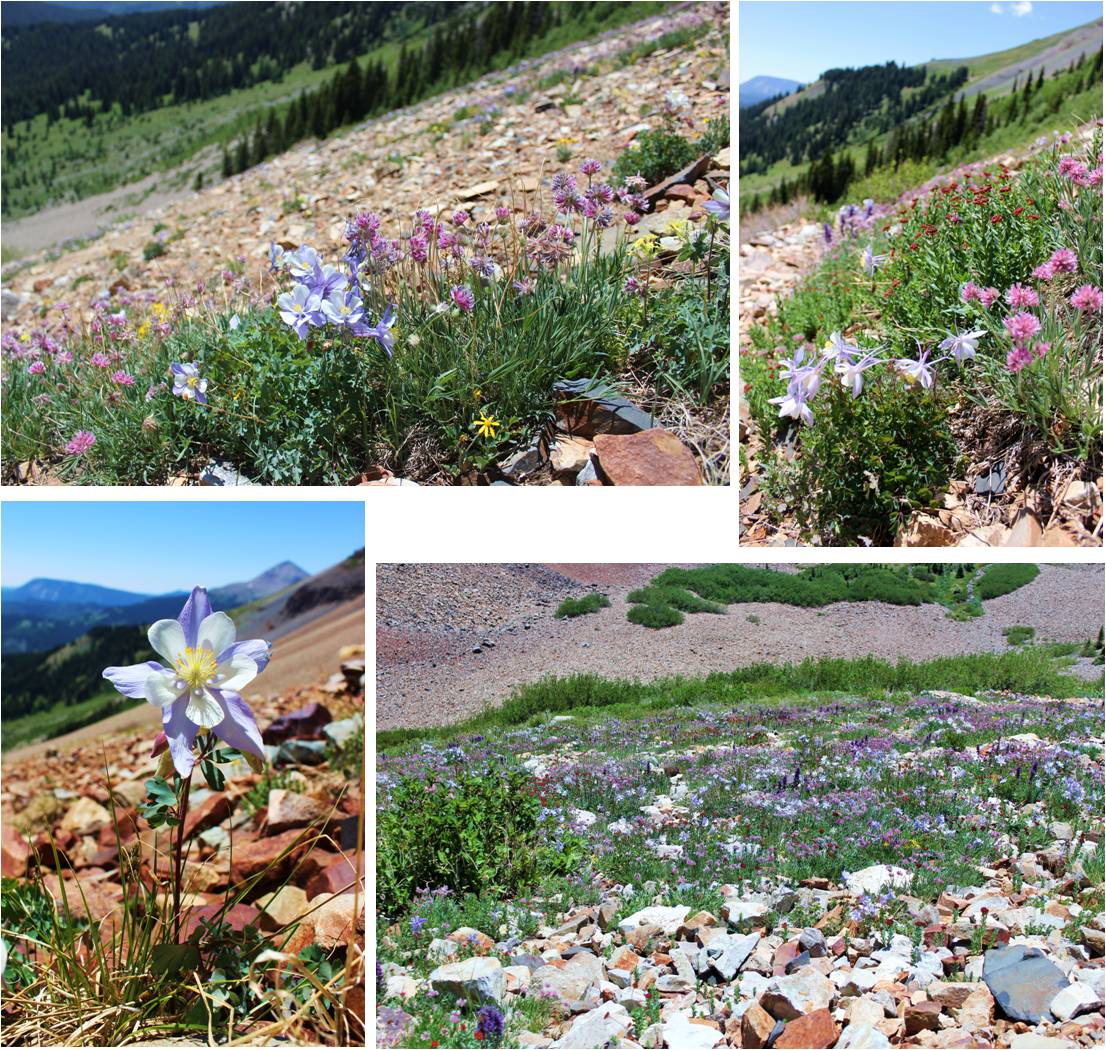 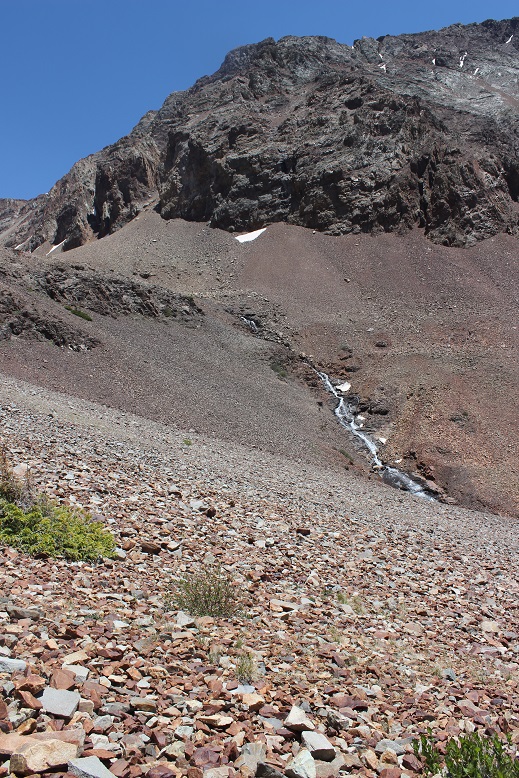 Here’s more of that talus route down…

I was able to retrieve my trekking pole with only minor bite marks. Due to the bite size I’m assuming a pika was involved, and was pleasantly surprised it wasn’t destroyed.  I’ve heard stories of the rodents ruining gear, but they only seemed to have a nibble this time.  Apparently they didn’t like the taste of the cork handle.

This hike made for a long and beautiful day, as I made it back to my truck at 4pm (and home at 10:30pm, so door to door it was a 27 hour day). I actually stopped at treeline to let some hikers pass (two young men trying to run down the talus to catch up with/pass me, and falling several times doing so… I figured I’d just let them pass since I wasn’t in a hurry today).  To make sure they were well ahead of me so we wouldn’t play leap frog I waited for about half an hour in the meadow, enjoying the view.  Talus might be tough to hike in, but it sure makes a beautiful mountain!

The El Diente Peak summit sticker can be found here