There are so many routes up Mt Meeker, and some have pretty cool names: Flying Dutchman, Dream Weaver, Dragon’s Tail, etc.  I chose the Iron Gates route because for some reason it sounded cool to climb through The Iron Gates.  I was also told this route had the best views of Longs Peak (I wasn’t disappointed).  Plus… the knife edge between Meeker Ridge and Mt Meeker sounded like fun, and I wanted to find out what a “flying buttress” was.

I was surprised with how many vehicles were in the Longs Peak Trailhead parking area when I arrived. It’s a large lot, and was at least halfway full.  Several hikers were readying their gear.  Last time I was here was the Friday before a Labor Day weekend, and I hadn’t seen very many people at all.  I saw dozens of hikers on the trail this morning.

I arrived at the parking lot at 2:30am and was on the trail by 2:40am. I chose to take the Chasm Meadows Approach from Longs Peak Trailhead.  The trail starts to the left of the Rangers Station.

I could see headlamps shining brightly ahead of me, and passed four groups of hikers before making it to the first junction about ½ a mile from the trailhead. Stay left here 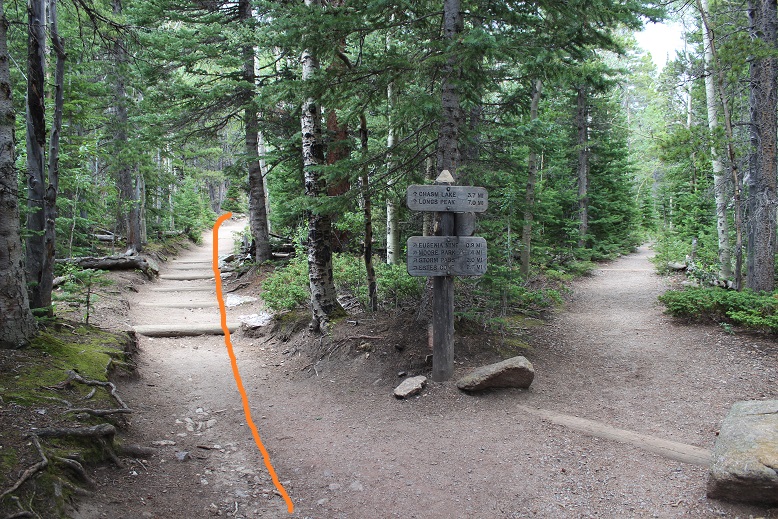 The trail is definitely class 1 all the way to Chasm Lake. I saw multiple groups ahead of me, all intent on Longs Peak.  They had very bright headlamps.  Very bright.  In fact, at times they were almost blinding, especially as I got closer to a group of hikers and they’d turn around to look at me.  I realized this morning just how dim my flashlight actually is (but I like it that way:  sometimes a bright flashlight gives too much information).

Around treeline I could see the full moon with city lights in the background.

About a mile before reaching chasm lake there’s a trail junction where you can stop for a bit to use the privy and let your horses rest.

Having to do neither I continued on towards chasm lake, a little disappointed to lose a couple hundred feet in elevation in the process.

Here there were a couple of small snow areas to cross that were quite slippery in the morning, but easy to navigate in the afternoon.

Just before Chasm Lake the trail ended. I made it to this area while it was still dark and it looked like there was a lot more snow than there actually was.  The dotted line is the route I took up the gully, the solid one is the route I took on my way back down. This ended up being a good approach, as the solid way down went through a waterfall that would have been messy in the dark.

My goal was to make it to the Iron Gates. In the dark I couldn’t see much and while I knew I was headed in the correct direction I didn’t have a visual yet of the Iron Gates.

The terrain at the base of the Iron Gates was very loose scree, mixed with small rocks. As I climbed higher the ground became loose talus that became more stable until it eventually turned into solid rocks.  I headed straight through to the back of the Iron Gates 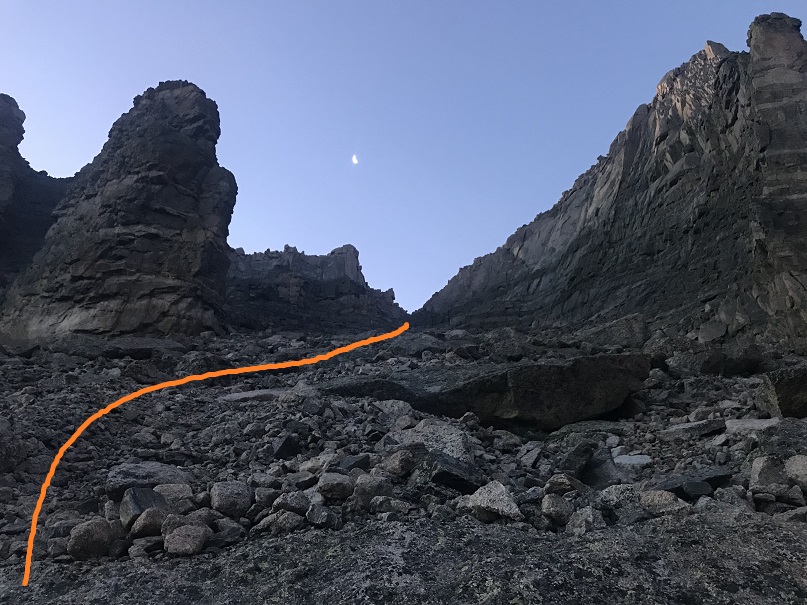 At the top of the Iron Gates I turned right (south) and climbed the northeast ridge to Meeker Ridge (the unranked peak, not the ridge itself)

Yes, there were some pretty awesome views of Longs Peak

I made it to Meeker Ridge at 6:45am. I got a quick selfie and video at this unranked 13er

Up until this point the hike had been easy, but now it was about to get a little spicy. It was time to traverse the short ridge between Meeker Ridge and Mt Meeker.  This ridge has a ‘mini-knife edge’ similar to the one on Capitol Peak.  I was able to stick to the ridge for this short traverse, dropping down to the right only once when absolutely necessary. This is a solid class 3 ridge with exposure.

Here’s a tip for the knife-edge part: It’s very similar to the one on Capitol Peak, and would make for a great practice run if you’re hesitant to try Capitol but feel solid with class 3 climbing. While on Meeker’s knife edge you can cross and use your right foot for balance by placing it on the rock beneath the ledge.  This rock is underneath the knife ledge and difficult to see, but a few inches wide, solid, and you can use it for extra balance if needed. The rock here felt more solid than on Capitol.

Here’s looking back at Meeker Ridge 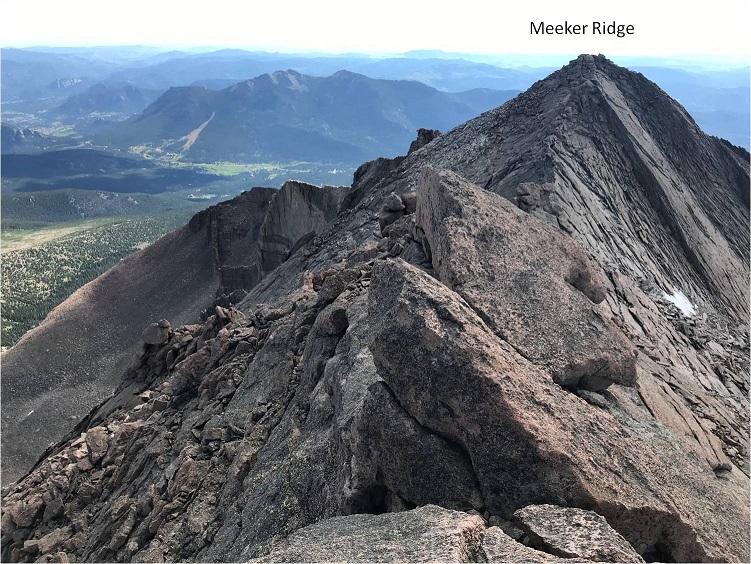 And some of the climbing/exposure on route

I made it to the summit of Mt Meeker at 7:15am, or what I thought was the summit of Mt Meeker. At the top of the traverse there were two points about 40 feet apart that both looked like the true summit.  I sat on top of the first point, but the second point looked higher.  So I went over and climbed to the top of the second point, but from there the first point looked higher.  So I decided to take a video from the middle of both points and pictures from both. 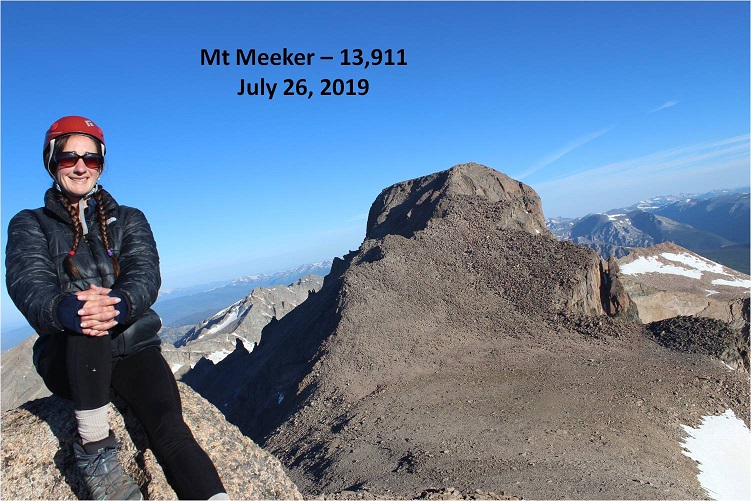 It was still early in the morning and the weather was holding out nicely. I decided to descend Mt Meeker and cross the Loft towards Longs Peak.  Longs Peak wasn’t my goal, as I’ve already summited Longs, but I wanted to get a look at the Notch route up Longs and summit Southeast Longs (an unranked 14er sub summit).  Southeast Longs is where the orange line ends. 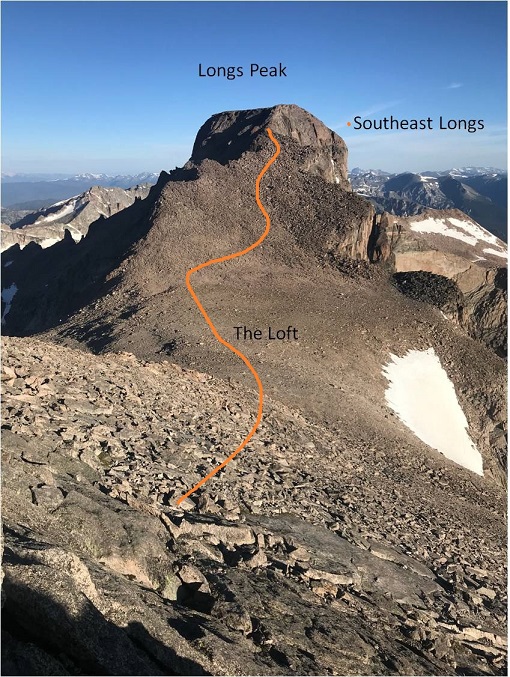 To get there I descended 450’ to the loft, and then gained 600’ to the top of Southeast Longs. 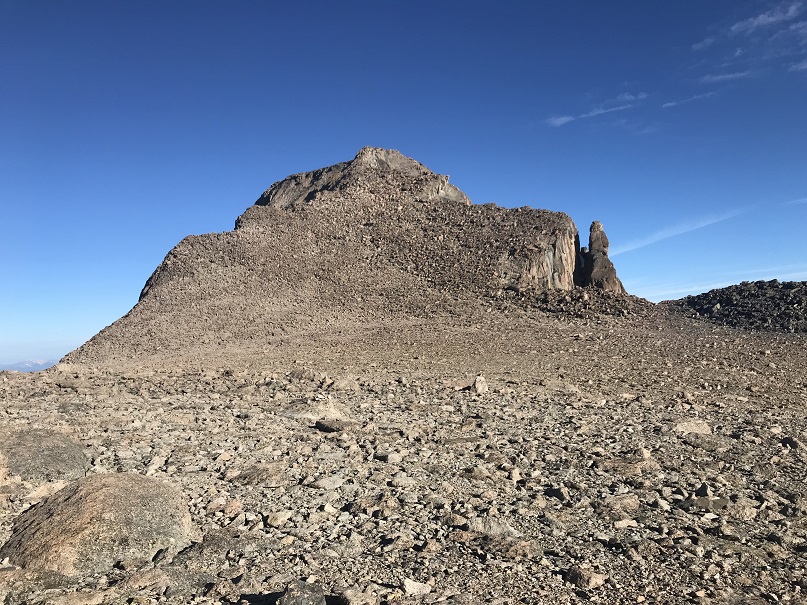 The rocks here were solid and much larger than they looked from Mt Meeker. There were a bunch of social trails here so I just took the path of least resistance to the top. 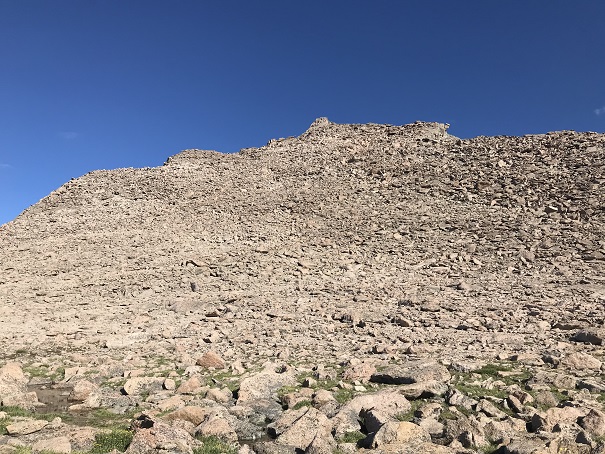 I made it there at 8:25am. You can see Longs Peak Summit in the background

Curious as to what the Notch and path to Longs Peak looked like from here I descended to the cairn that indicated the entrance to the Notch and looked over. It looked like a class 3 scramble that would lose a couple hundred feet in elevation, and then re-gain it on the other side, connecting with the traditional Longs Peak Route just before the final pitch. 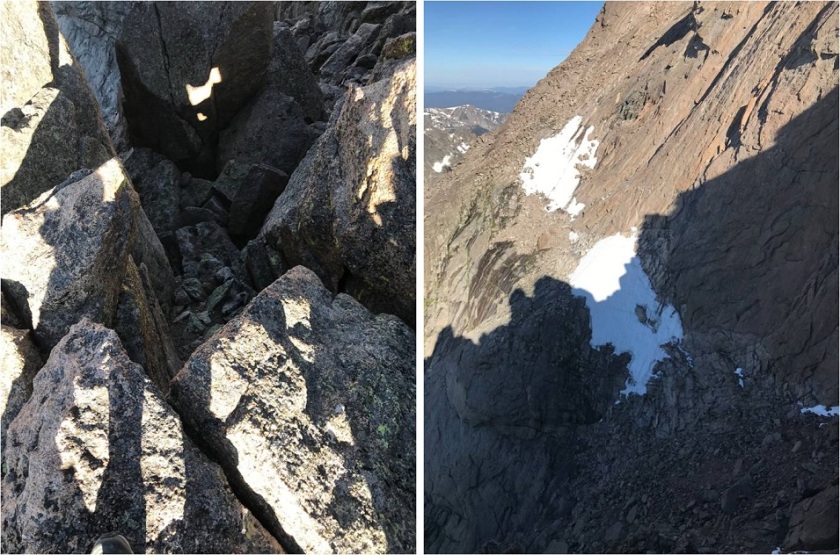 I briefly thought about attempting Longs Peak as well, but did some mental calculations and figured it would get me back around 3-3:30pm, and I really wanted to be back around 1:30pm, so I decided to save Longs Peak round 2 for another day. Also, there were a ton of people queued for the final push on Longs (I could see/hear them) and a lot of people on the summit as well.  I’m not a fan of crowds, especially on peaks.  In any event, I still had some more climbing to do myself, as I needed to re-ascend Mt Meeker to head back.  I did not want to make this a loop. 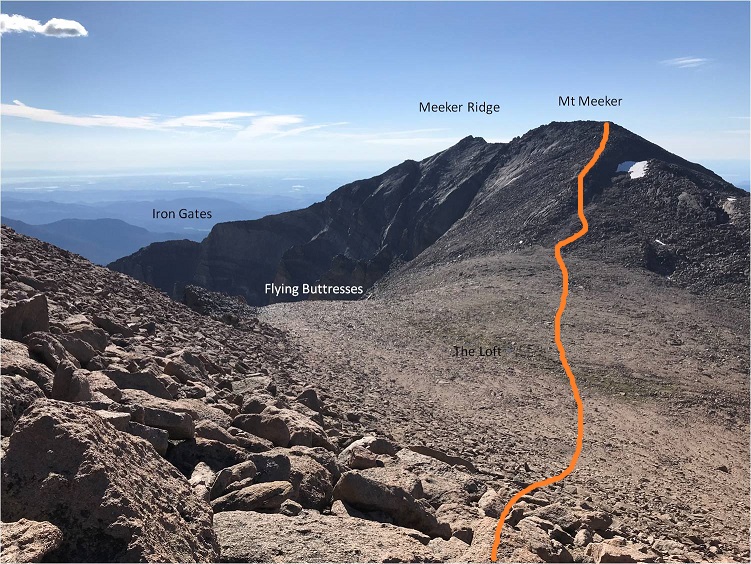 While they looked ominous at first (especially for being so early in the day) nothing came of them. The clouds did hide the sun for most of my return back to the trailhead and I did get a few drops of rain here and there, but I was never worried about thunderstorms.

Time for knife-edge part 2. I felt much more confident the second time around, and the traverse went much faster.  I was well aware of the group of 15 or so people on top of Longs Peak watching me make the traverse.  I could hear them talking to each other as I climbed up boulders and balanced on the ridge.

Just as I made it back to Meeker Ridge I met a young man beginning his attempt of the traverse. He’d had a long day, starting from Sandbeach Lake.  I wished him luck and was on my way back down the Northeast Ridge towards the Iron Gates

As Chasm Lake came into view I could hear loud shouts that sounded like a large group was down there having fun. A group was paddleboarding. It seemed like a lot of work to me to get multiple paddleboards up to Chasm Lake, but hey, they must really be into the sport. I wondered to myself if it was legal to paddleboard there?  I descended into the Iron Gates and had no problem on the larger rocks/talus.  However, descending the scree was a bit of a small nightmare.  I was so glad when I made it to the bottom of the Iron Gates and turned around to see them in the daylight

This brought me to the base of Chasm Lake, where I picked up the trail back to Chasm Meadows. This is also where I met up with a group of 12 or so campers from a nearby camp.  I could tell immediately they weren’t Girl Scouts because there was only 1 adult with them, the girls were all wearing shorts and did not look like they’d been “roughing it”.  I asked them where they were from and wished them well as I hiked out.

A few minutes later as I reached the Jims Grove area I could hear the girls behind me, their counselor yelling at them every 10 seconds or so to “hurry up” even though they were setting a fast pace. Long story short, she pushed them too hard and one of the girls clipped and fell. She’s alright and just scraped her knee, but I hope the counselor learned her lesson and slowed down a bit.

It was great seeing the waterfall crossing areas on my way down in the daylight. 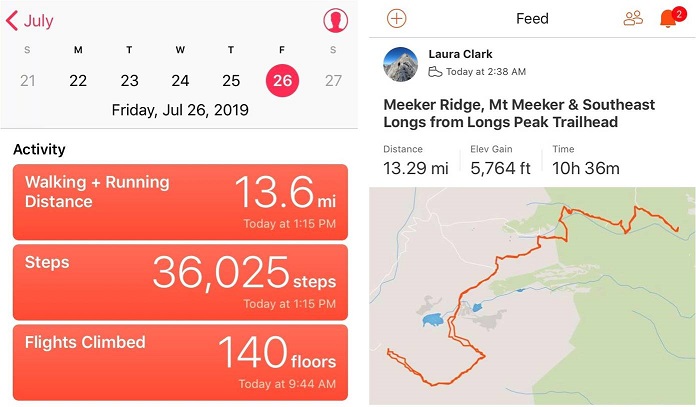 Today’s hike was absolutely beautiful! I can’t wait to head back here to tackle a few more 13ers…