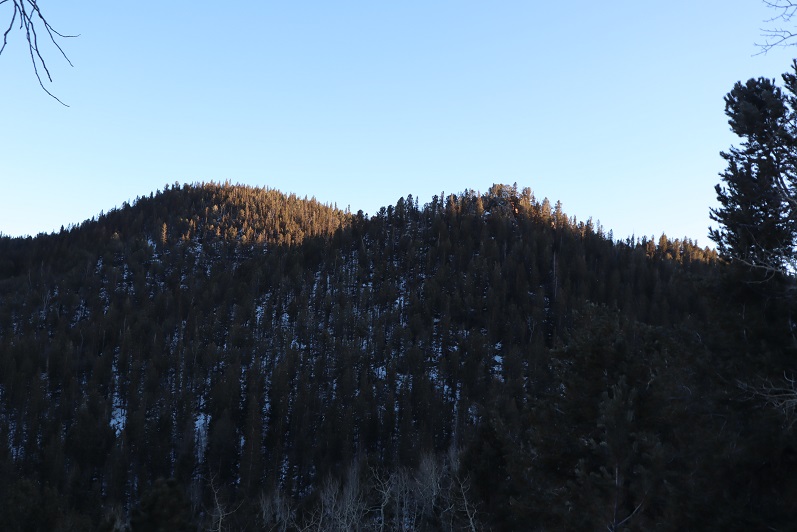 The forecast for wind today was between 70-90mph up high, so instead of hiking above treeline today we chose to hike some 10K and 9K peaks. It was still pretty windy, but at least we weren’t being blown away.  We got a bit of a late start because Old Stage Road takes forever to drive.  It’s nicely plowed but still icy in the morning.  I decided to park at the furthest peak first and work our way back.  The first two peaks were each less than a mile in length, and more like warm-ups for the rest of the day.   I’m really glad we decided to do them first because if we’d left them for the end I’m not sure we would have summited them.

And then south to the (rocky) summit. 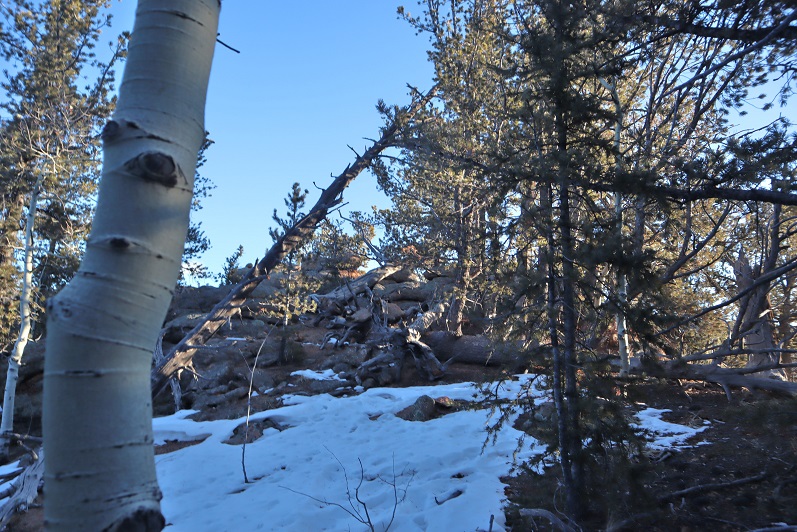 There were no views on this summit, so we took a quick picture

Signed and replaced the summit register

And made our way back to the truck. 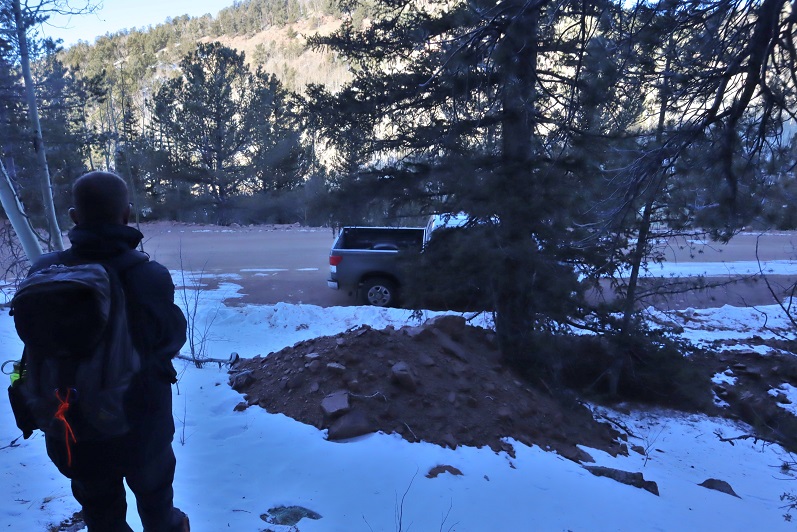 This was a very simple and straightforward trek up and down the mountain (without a trail or views).

We hopped in the truck, leaving on all our gear, and headed to the next trailhead. There wasn’t a place to park so I parked on top of a dirt berm near a shooting area littered with shell casings and we headed southwest up the side of the mountain.

There was more snow here, but luckily we soon came upon a trench! It looked over a week old, but made route finding much easier.  We found a microspike on the trail.  I attached it to Steffen’s pack and we took it out with us.

The trench led us to another rocky summit without any views

We signed and replaced the summit register and were quickly on our way back down. 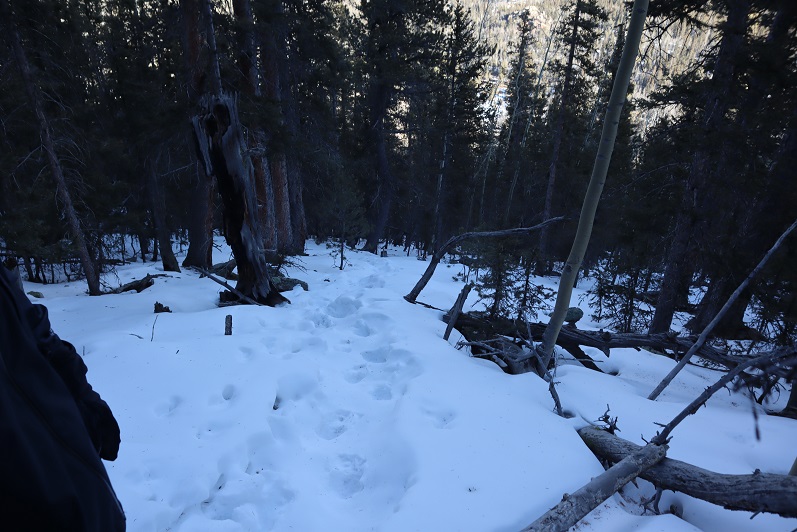 Two easy peaks down, we now drove Old Stage Road to 371 and took that 4WD dirt road south to Emerald Valley Ranch, where I parked next to a locked gate.

Emerald Valley Ranch is now owned by the Broadmoor, but was originally purchased as a Girl Scout Camp, and then sold to Spencer Penrose.

We started out hiking southwest along the road

There was a locked gate, but no ‘no trespassing’ sign and tons of footprints, so we just went through the gate

I found some pieces to a hornets’ nest in the snow. At first I thought it was the entire nest buried, but it ended up just being a few pieces.

The road was supposed to lead us near Emerald Valley Boys Camp, but we didn’t see any evidence of that. Instead we came to what was left of an old cabin.  We looked around for a bit and then headed south. 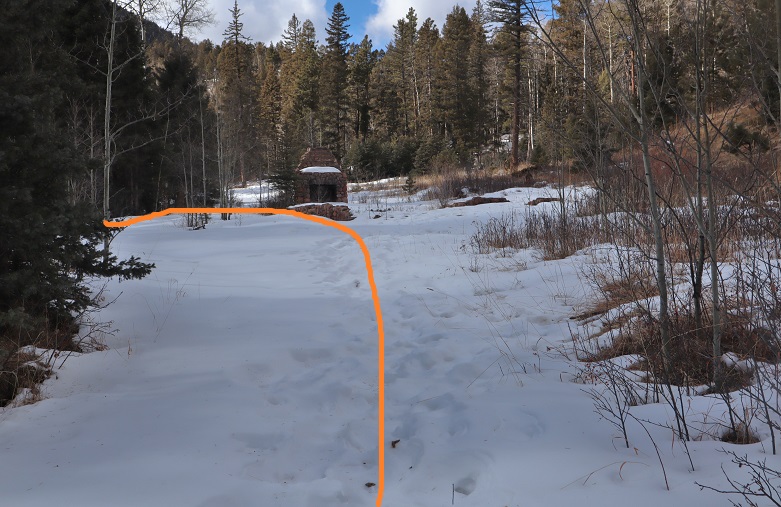 The trench stopped at the cabin and there was no trail here, so we bushwhacked our way south up the mountainside, following deer/animal tracks when available.

We came upon a small lashed structure that looked to have been lashed recently. Maybe this was part of the Boys’ camp? It would make a good tent if you brought along a tarp.

Onward and upward! Check it out: I found some pieces to another hornets’ nest!  Kind of cool, considering it was over a mile away from the last one 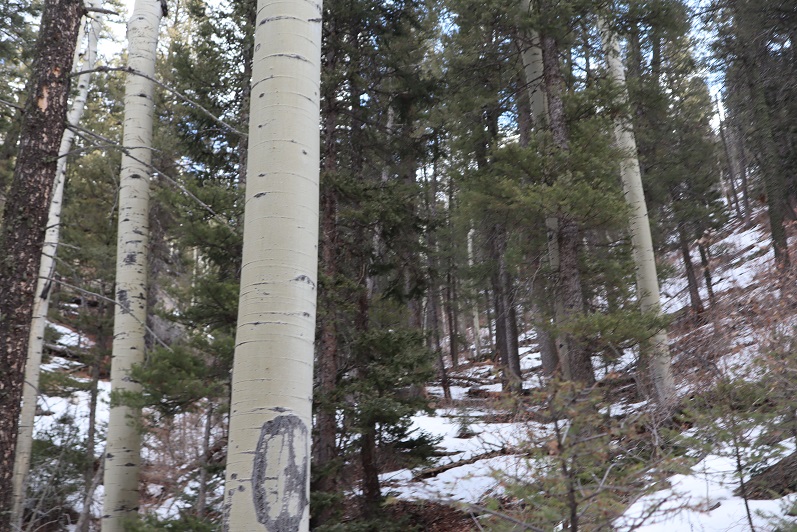 This was our aim

Once we made it to the ridge it started snowing, which was weird because snow wasn’t in the forecast for today. The wind also picked up, but since we were below treeline it was tolerable.  Notice all the deer/elk chews on the trees?  We saw them all day, and tons of scat as well (from Deer, Elk, and Bighorn Sheep)

The ridge seemed to last forever! Every time we thought we were at the summit the route would dip down and then back up again 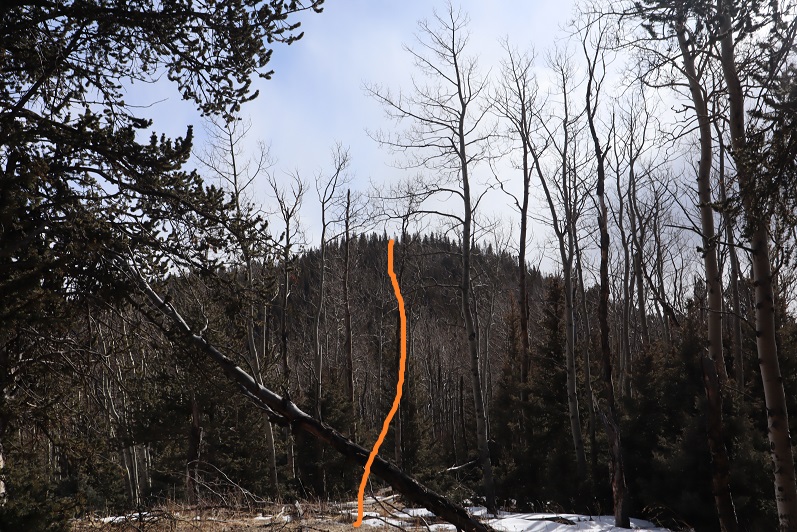 There were so many downed trees! Branches and limbs were scattered everywhere.  We had to go around large piles of dead trees and circle back again several times to stay on the ridge. 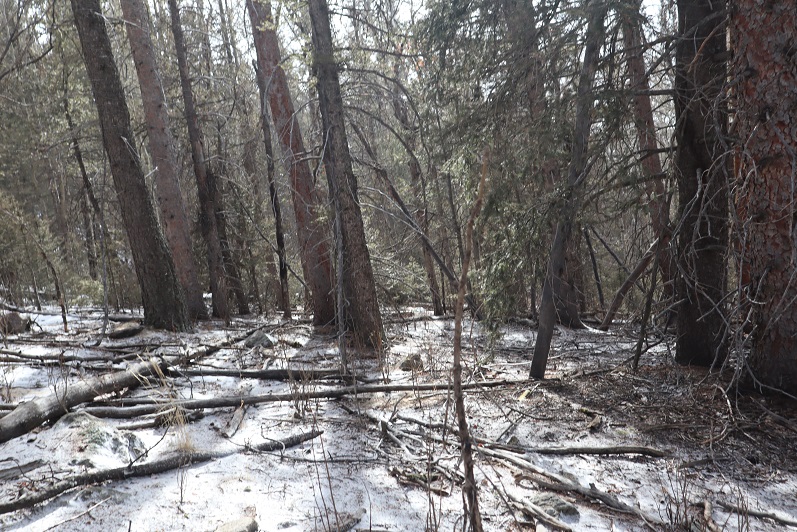 There were several places that looked like the true summit. We walked around them all but agreed the highest point was the one furthest to the southeast.  None of the high areas had a summit register, so we left one and since it was cold turned around and headed back down the ridge, being careful to stay on the ridge this time and not heading back down the gully 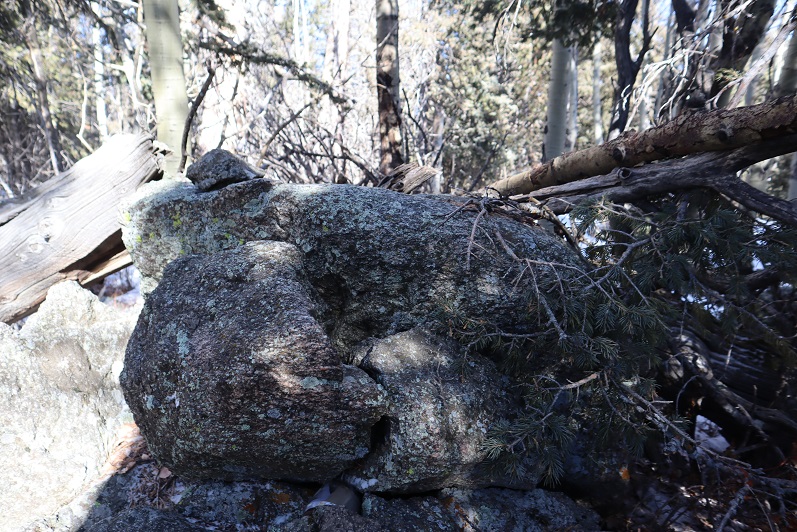 The skies suddenly cleared and we were treated to a great view of the peaks we hiked last weekend: Knights, McKinley, and San Luis 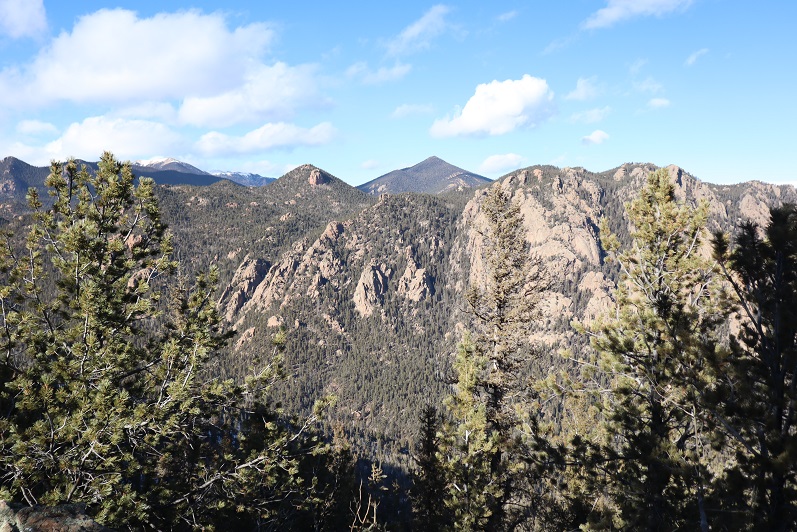 Here’s the last bit of the trek to the summit

We followed the ridge all the way to 9982, which we named “Yellow Peak” because it fit and because there was yellow duct tape on the summit register.

Here’s looking back on Blue Mountain

At this point we had a decision to make: we either turned back now and headed back to the ruins/Emerald Valley Boys Camp area, or we made this a loop and continued on.  I was a bit worried because I hadn’t brought a flashlight and if we continued I knew we’d be hiking out in the dark.  Luckily Steffen had one in his backpack and we were feeling great so we decided to keep going and hit a few more peaks today.  We continued west down the mountain to a small saddle on a game trail, and once at the saddle picked up an actual trail. 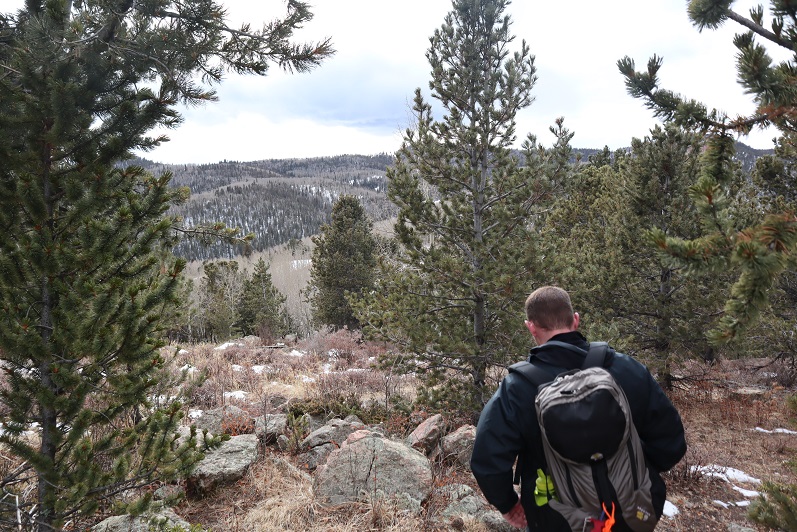 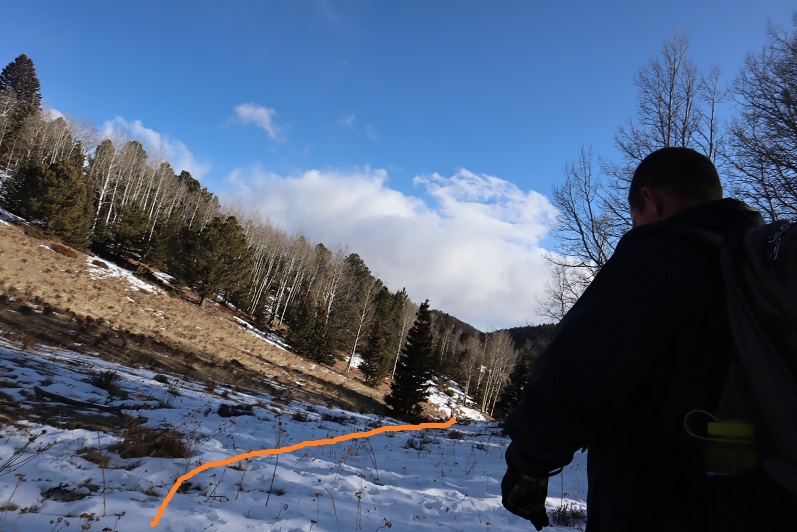 That led to a 4wd road! This was great!

We followed the road west for quite a ways, past a run-down cabin and a couple of homes sporting tons of elk antlers

We could have followed the road up to the saddle, but at the time we didn’t know this, instead we cut across a field and headed south up the mountain (through a lot of snow) 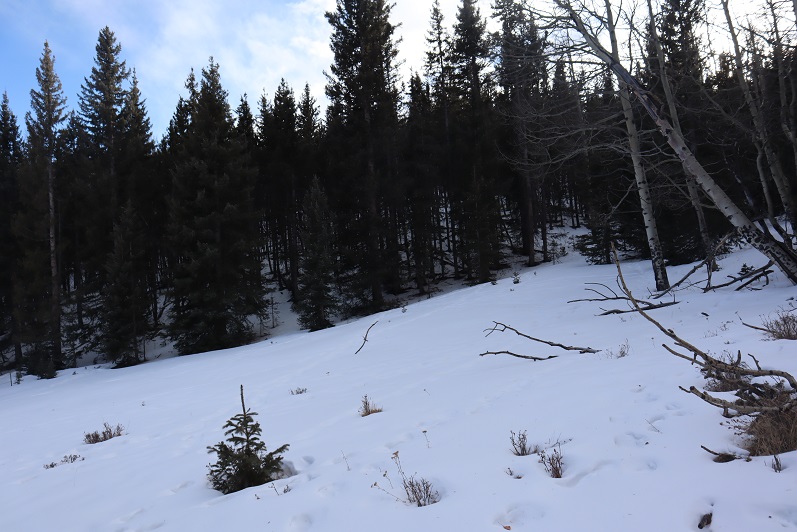 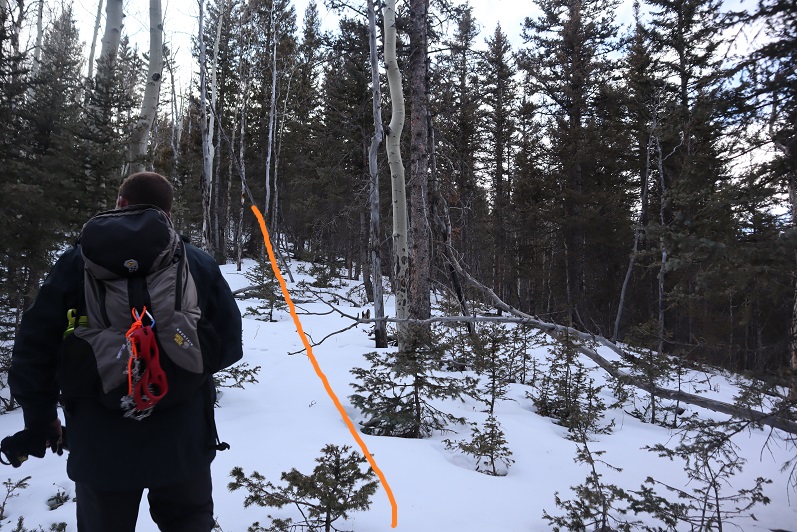 There wasn’t a lot of elevation gain on this one since it’s an unranked peak, and it didn’t take us long to make it to the summit. 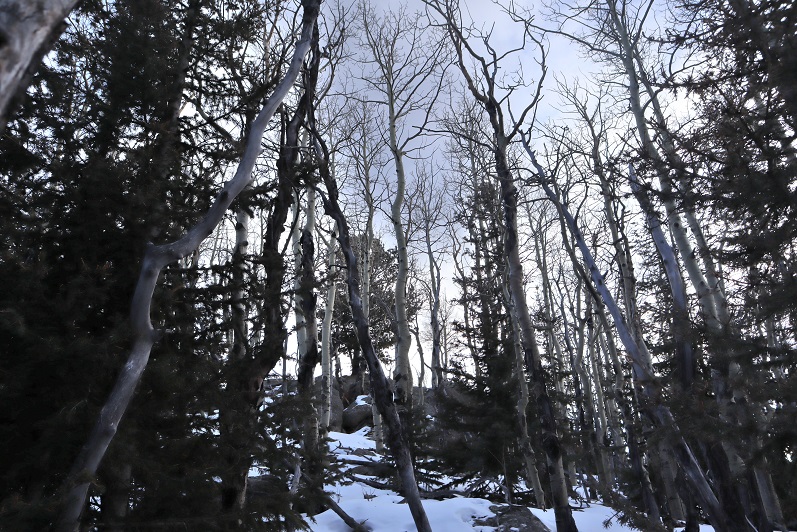 There wasn’t a summit register on this peak. We would have left one but we didn’t have one to leave. 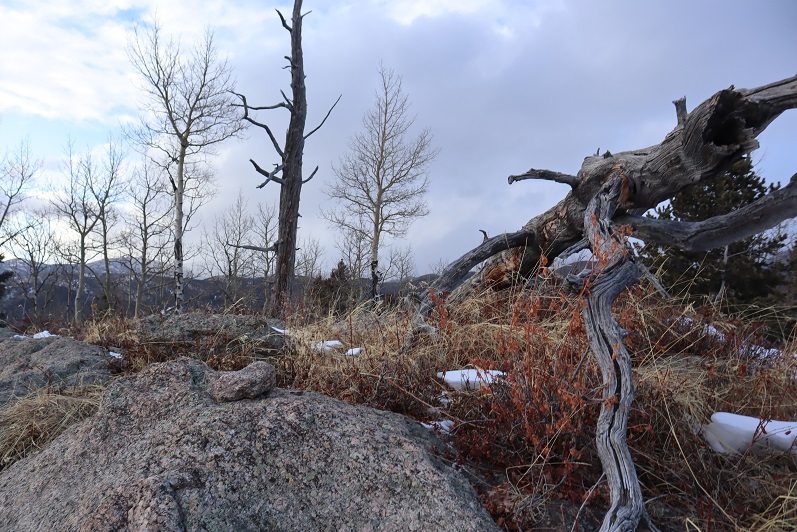 Turning to the northwest we could see our last summit of the day: 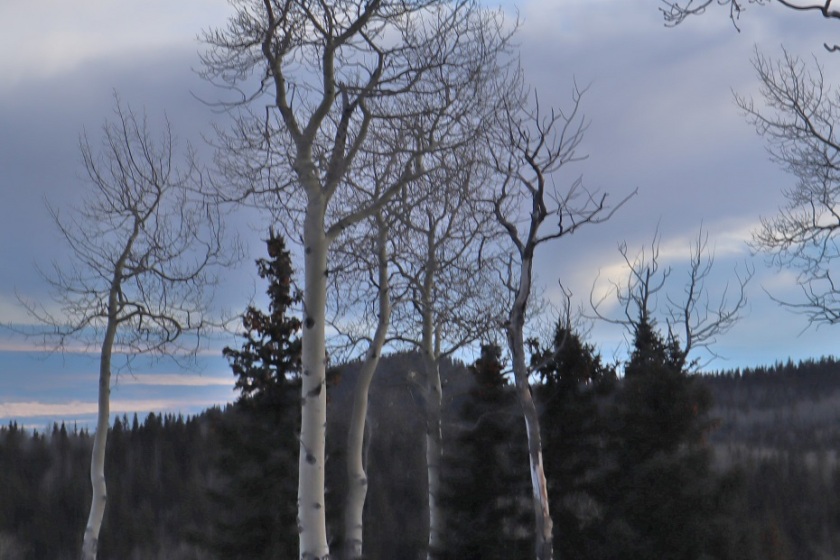 This really was a simple hike northwest past the road and up to the summit of Green Mountain.

When we arrived we had a great view of Black Mountain

There was what looked to be a mine at the summit?

We walked all along the top of the summit just to make sure we hit the actual ‘high point’. We were unable to find a summit register for this one either, and were a bit disappointed until Steffen got an idea:  he decided to look inside this stump and guess what?  There it was!  It hadn’t been signed since 2010 so I’m sure no one else had thought to look inside the stump since then. 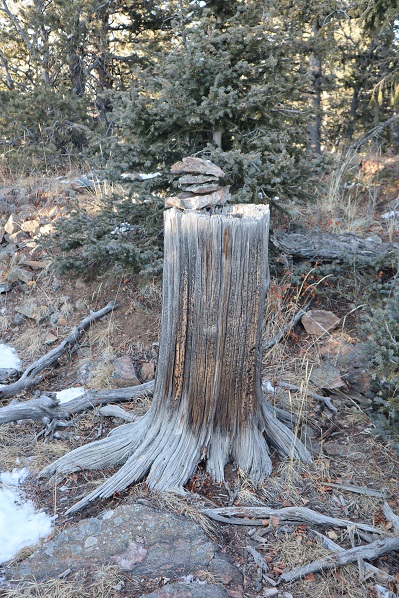 Time to make this a loop! We traveled west down the ridge, avoiding this outcropping by navigating it to the left 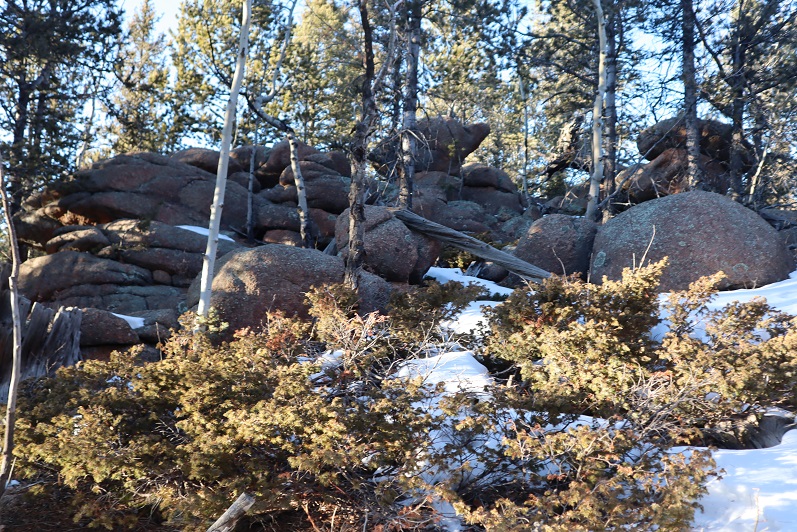 This quickly brought us to the road

We followed it and were surprised to come across a gate. The only thing to do was climb over it. When we made it to the other side we realized we were now on the ‘right side’ of the gate.  Curious though, since we hadn’t seen any other gates/no trespassing signs on our way in?

A little ways after the gate, and just before the road curved west, we saw a cairn to our left (well, a rock on a log) and followed a faint trail down the mountainside. 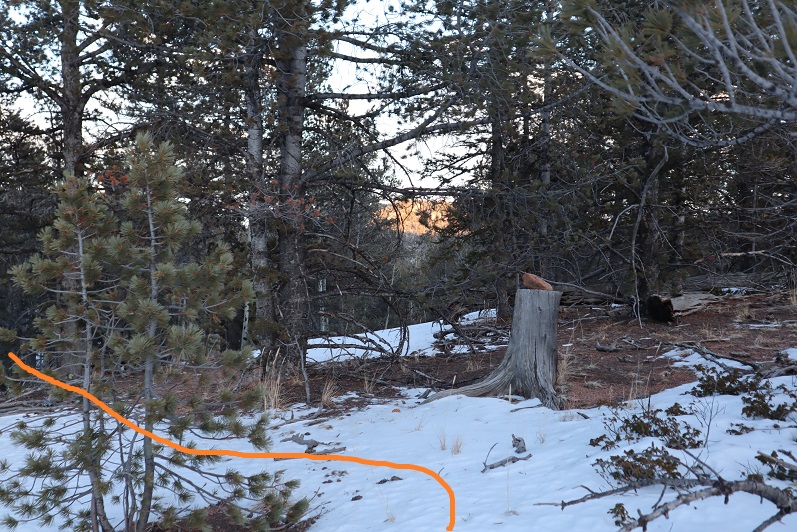 Eventually the snow stopped and we descended a steep pipeline/scree slope to another 4WD road. 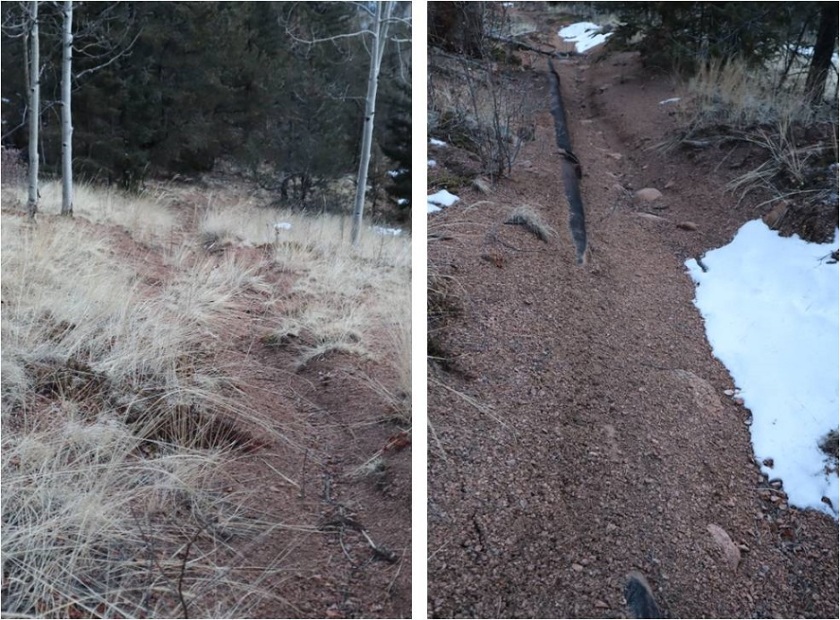 I was excited to finally make it to this road! We still had quite a ways to hike, but now all we had to do was follow this road out.  Well, I was excited until the road became covered in snow.

The snow was about 2 feet deep and snowshoes would have helped greatly, but we didn’t have any. Instead we took turns trenching and walking in each others’ footsteps.  I could tell this was especially taxing for Steffen.  I’m used to going for long hikes without eating/drinking anything.  My body is just used to it, but his isn’t.  Although he’d had plenty of snacks today and was currently out of water because he’d drank it all, he was tired, hungry, and thirsty.  He’d already taken a few Advil and I was worried about him hiking in the dark.  And then it started to snow. 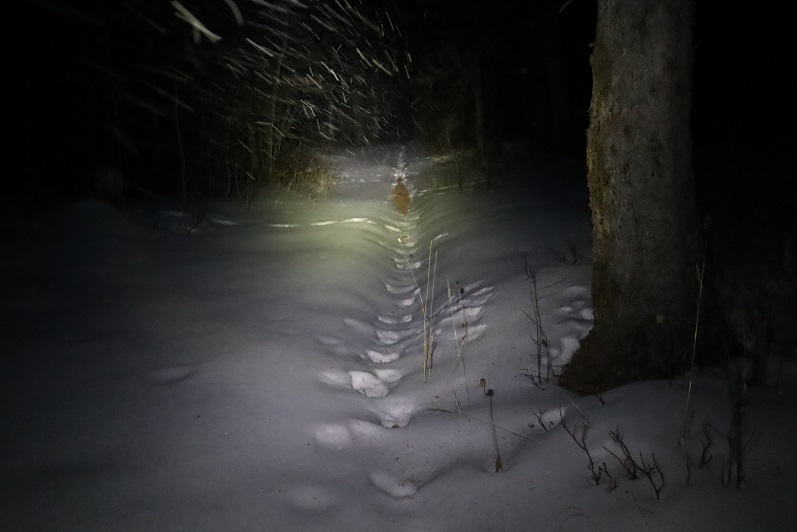 He stopped to take another Advil and we heard a large cat scream twice to our left. We decided to double the pace towards the ruined cabin.  At times there were animal tracks to follow, but most of the time we were trenching through several feet of snow.

I was excited again when we finally made it to the ruins: we now had less than a mile to go!

This was the easiest part because the trenching stopped and we followed our footsteps in. We made it back to my truck around 6:30pm, making this a 15.5 mile trek with 4692’ of elevation gain in 10 hours, 45 minutes.

I was proud of Steffen! This was the longest hike he’s ever done.  He was exhausted, and offered to cook me steak to celebrate when I dropped him off at home.