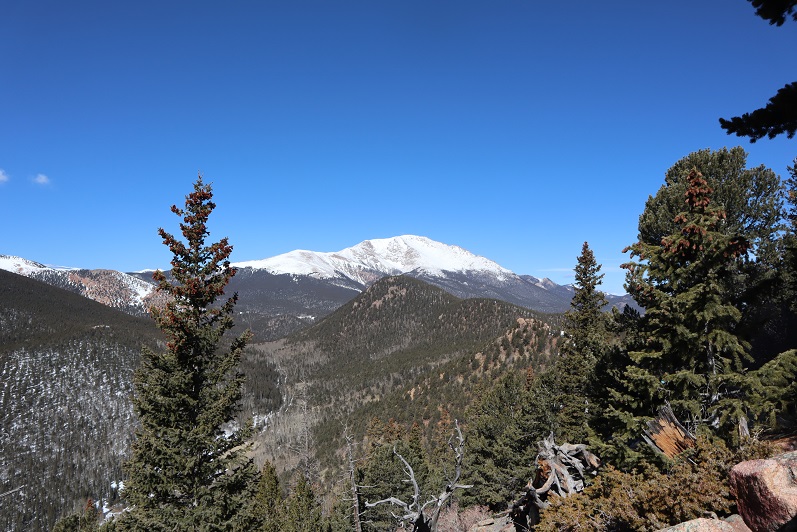 Third time’s a charm! For so many reasons…

I’ve attempted this peak on 2 other occasions. One time a few years ago I thought I’d summited (more on that later) and last week I turned around due to deteriorating snow conditions. Today I’m glad to say I had a successful summit!

I drove to Steffen’s house at 4:30am and we made it to the North Cheyenne Mountain gate by 5am, but unfortunately, the gate was locked. I guess it didn’t open until 6am? Oh well, we had a plan B, so we drive down Old Stage road for about 45 minutes, intent on Frosty’s Park and hiking Mt Rosa or Almaghre (or both). About 5 minutes from making it to the trailhead Steffen realized he’d forgotten his hiking boots. Drat! We would have to drive back and get them. As I said, third times a charm, and we arrived at the (now open) North Cheyenne Canyon Trailhead at 7am and were on the trail by 7:20am. It was already light out and I had serious doubts we’d summit today due to warm snow, but at least we’d get in a good hike. 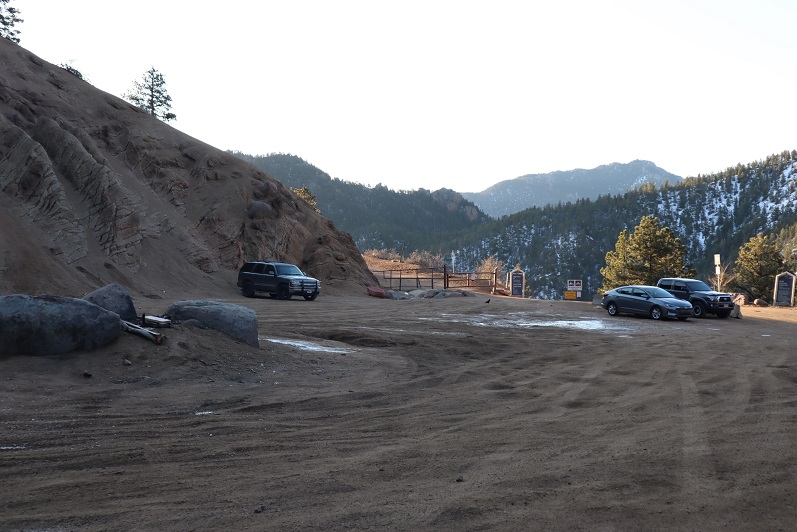 We wore our microspikes the entire way, even though they weren’t always needed. I’ve done this hike several times, so I won’t go into a detailed description of the route to Loud’s Cabin, but you can find it here 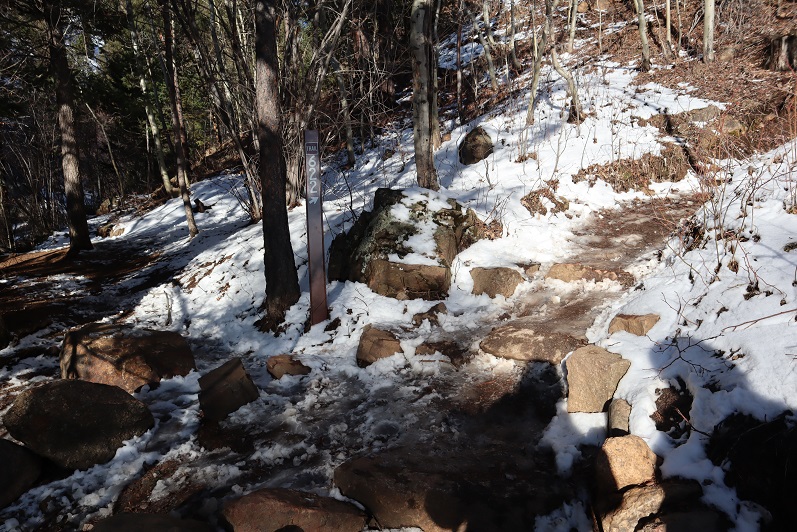 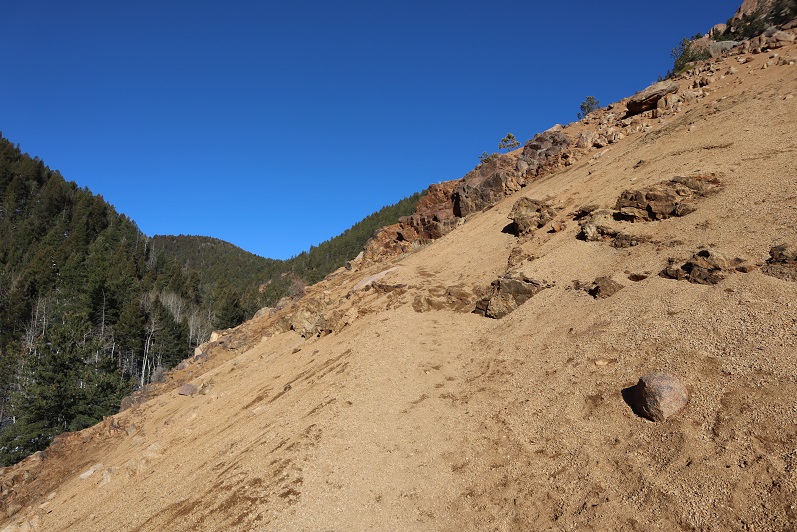 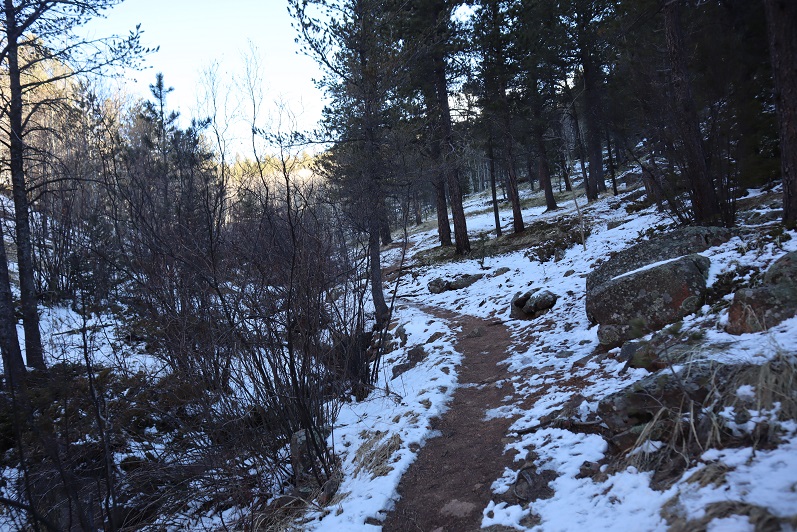 Along the way we saw some curious tracks in the snow. They were about 5-6 inches long and distanced about a foot to a foot and a half apart. It took us a while to figure out they were turkey tracks. It would have been much cooler had they been emu or velociraptor tracks or something, as they seemed too big to be turkey tracks…

Once at Loud’s Cabin things once again got tricky. I’d made a GPX file from CalTopo with the way we were supposed to go, but the trails were no longer there. We decided to ascend the hill above the cabin and head west. It became apparent almost immediately we were on the wrong ‘trail’ but we were on a trail and headed in the right direction and felt committed… until it ended.

I noticed a few cairns so we followed them for a bit until they ended as well. I’m guessing the cairns were indicating an alternate route up Mt Garfield. 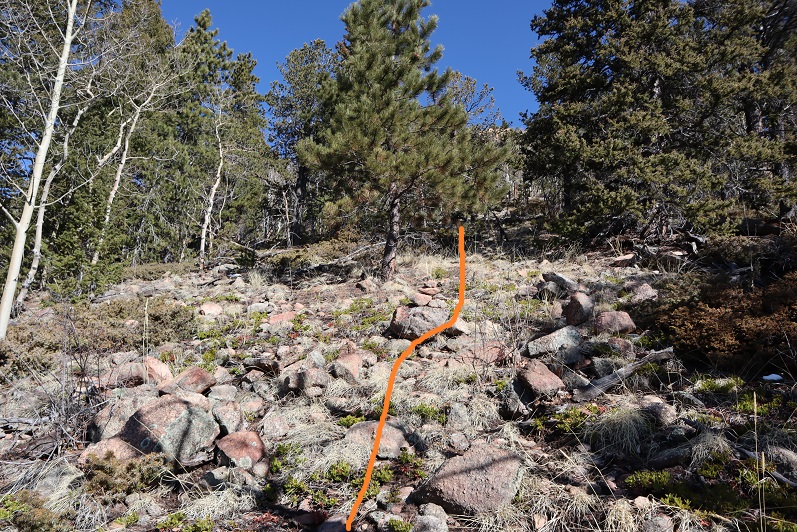 We weren’t interested in hiking Mt Garfield today, so we left the cairns and aimed northwest along the side of the mountain, making our own trail as we went. This included some fun scrambling over rocks and fallen logs. Be careful: those rocks and logs move!

Also, here we saw the first near tracks of the season! I’m thinking mama and cub

We had great views of Tuckaway when the trees cleared (which wasn’t that often). The frustrating part? We didn’t seem to be getting any closer. In fact, it felt like the mountain was always in the same place (well, it was, but we weren’t making much progress).

This was our view of Tuckaway most of the time 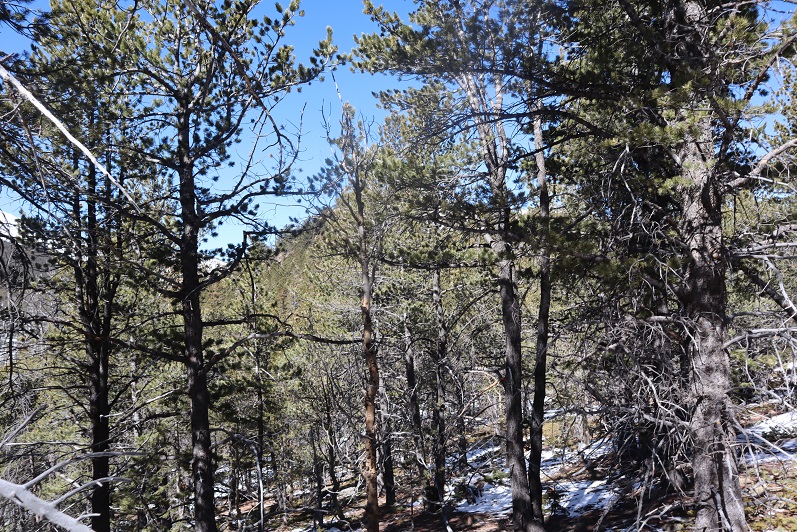 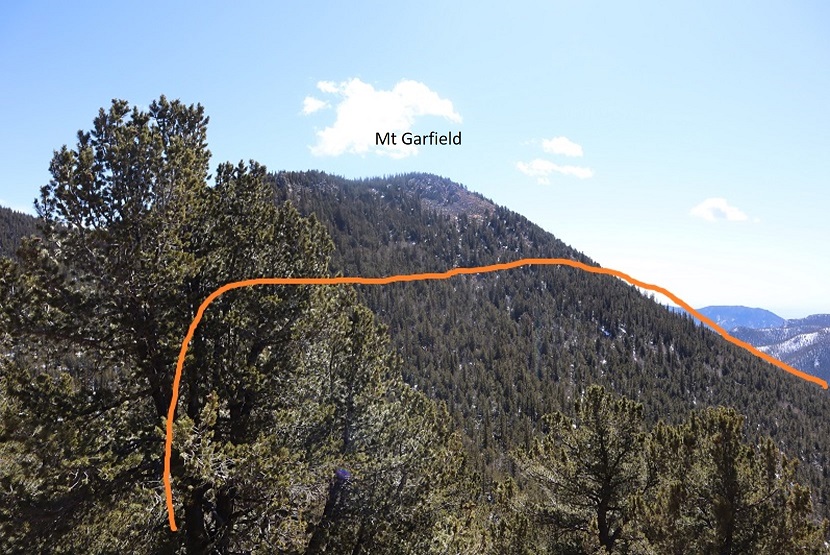 And a look at the route before us towards Tuckaway

There were tons of ways we could have traversed over to Tuckaway, and we actually went back and forth while we were hiking as to the best way: there’s snow you cannot see in a lot of areas that would make certain routes lousy. We’d initially wanted to just hike across the ridge, but instead this is the path we took:

I got a picture because the view was great

And we were off, deciding to initially descend this spot to the north (where we came across a mine not listed on the map), and then head west down some snow covered boulders. The scree here was really soft and felt a bit like quicksand. 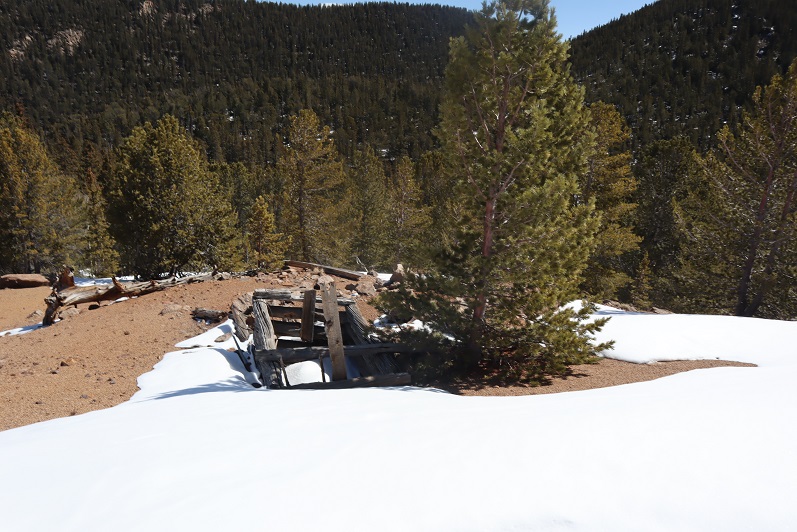 There are no great pictures here, as we were just in the trees headed towards the saddle just before Tuckaway. When we reached the saddle it was time to don our snowshoes. We trenched a trail from the saddle to the west and came across my tracks from last week.

My tracks eventually ended and we had a time sinking up to our waist in the soft snow, but we were stubborn and took turns trenching: we could see the blue skies above indicating a ridge and were determined to summit today

We made it to the ridge and to our immediate left was a cairn. This is where I’d stopped a few years ago, thinking this must be the summit (cairns like this usually indicate a summit).

It certainly looked/felt like the summit, and indeed, from here you cannot see a higher spot. However, I’d had someone (not so nicely) comment on my blog that I hadn’t reached the true summit; that it was in fact further to the west. So today I was here (again) to see if he was right. We decided to follow the ridge west, through several feet of snow (I love snowshoes!!!) gaining and losing elevation as we went. 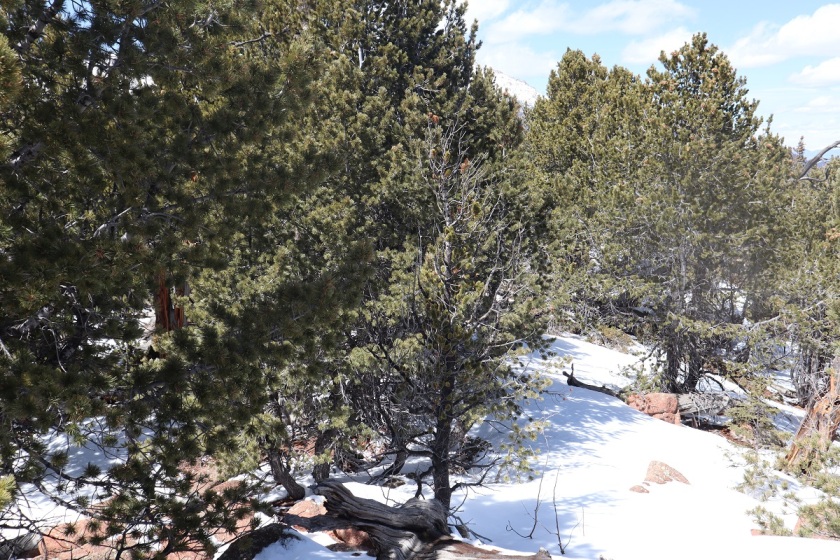 After about 2/10ths of a mile we came to a point I wasn’t convinced was higher than where we’d been before but was definitely the spot I’d seen in other one person’s picture as the summit. There was no summit register here either and no cairn indicating a summit.

We decided to climb the rock, which took careful footing and a leap of faith. Here’s Steffen heading back

Here is my summit photo 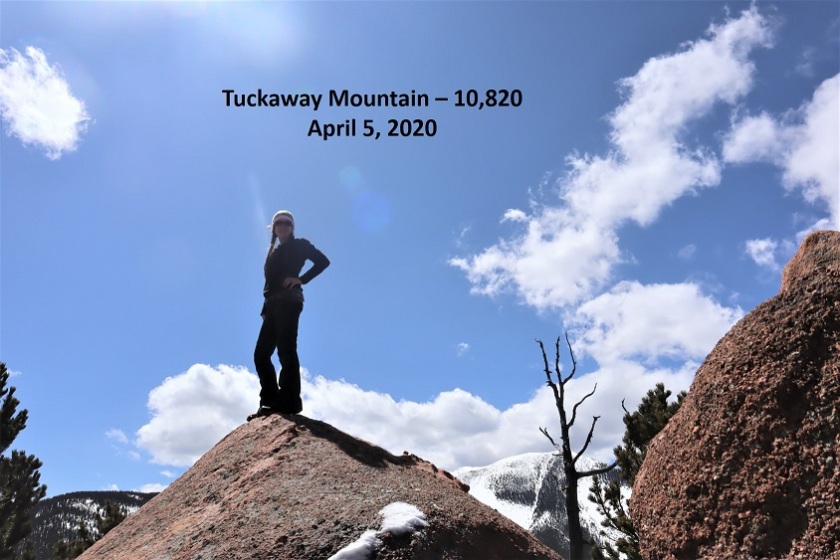 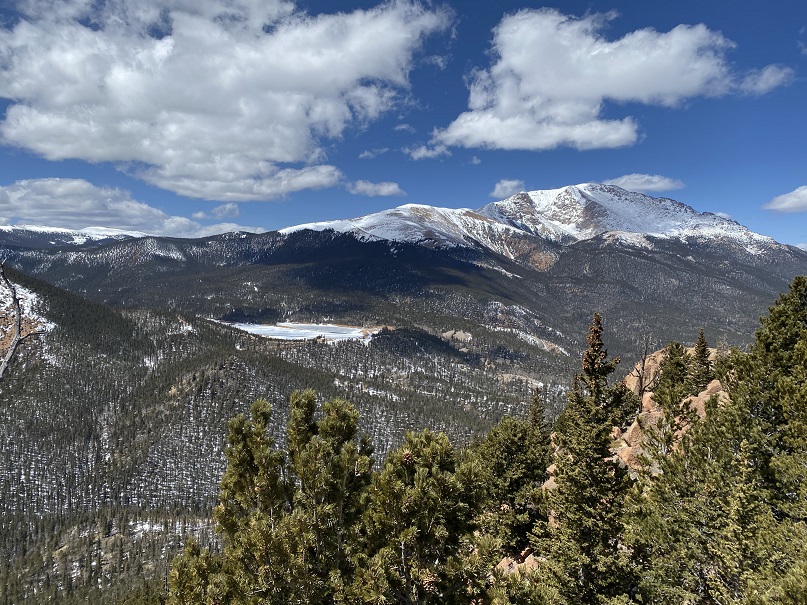 We took a summit selfie

And I got another shot of the way back down 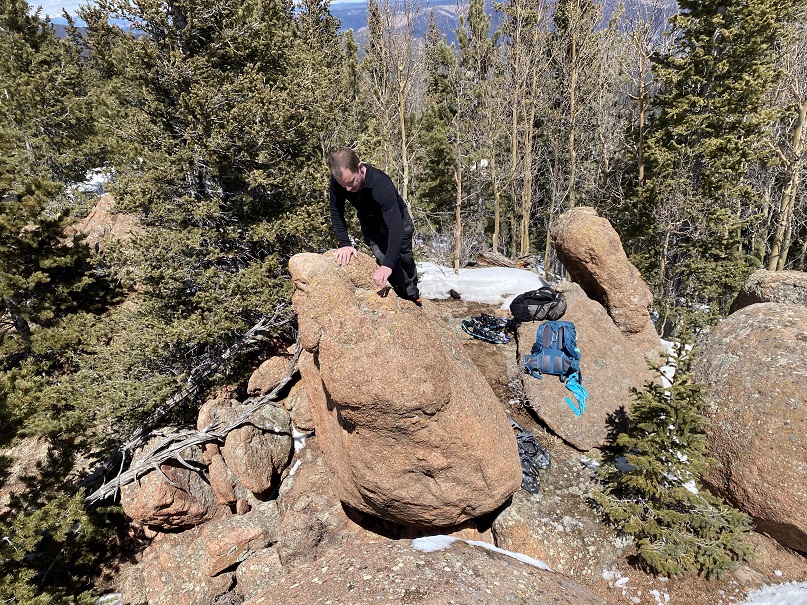 Side note: As I said earlier, I wasn’t convinced this point was any higher than the point we were at before, so once I got home I put the route up on CalTopo. It showed the second point was indeed 3 feet higher than the first, but I hadn’t climbed to the top of the first rock like I had the second. In other words, I think both places are of similar height, and in fact, while the rock was difficult to climb I’d say the route I took the first time was more challenging than the one I took today. In any event, either way, we summited because we made it to both points. I think either point should count on its own.
We decided to descend the way I’d trekked last week, and followed our snow tracks to the saddle 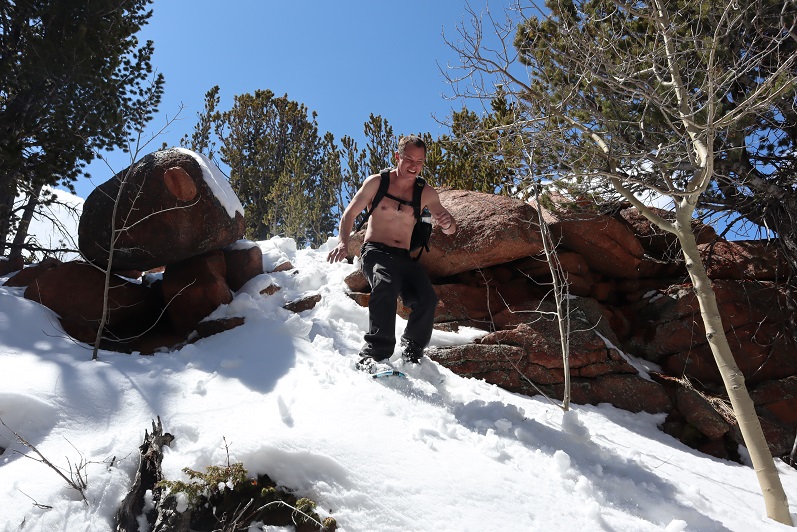 And back down the gully to the trail I took last time.

What’s frustrating here is the trail that’s on ALL the maps, GPX files, etc. is a trail the forest service doesn’t want you to take. They’ve made it extremely difficult to follow because they don’t want people hiking there. They’ve essentially tried to close this trial.

I totally get this, but the problem is they haven’t established new trails/produced proper GPX files, etc. of new routes. This is the best they give, which is a poor excuse for a map and doesn’t include topographic features or mountain names. It’s like they want you to get lost 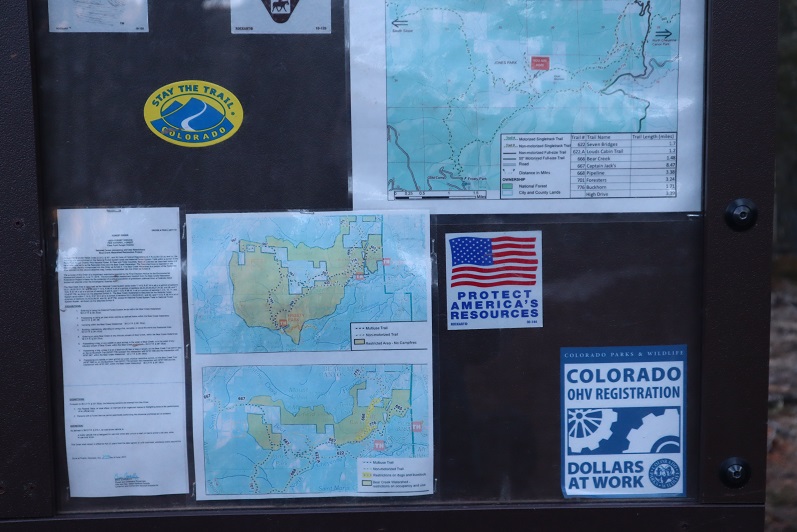 I’ve been in this area several times and their new trails are terrible and are meant for dirt bikes, not hikers. It’s really frustrating: I’d set out today to follow proper (new) trails and provide a GPX file for others interested but was unable to do so due to lack of information. In my topo picture at the end it shows I followed the trail on my return, but that’s the one they’ve blocked off, so it isn’t actually a trail. IT was however, my safest option.
We encountered a lot of snow on the trail on the way back, and instead of complaining about how we kept on postholing we decided to make it fun. Here’s Steffen trying to get across the snow without sinking by running fast (spoiler alert: that doesn’t work)

We made it back to just below Loud’s Cabin, linked back up with Trail 667, and followed it back to the parking lot 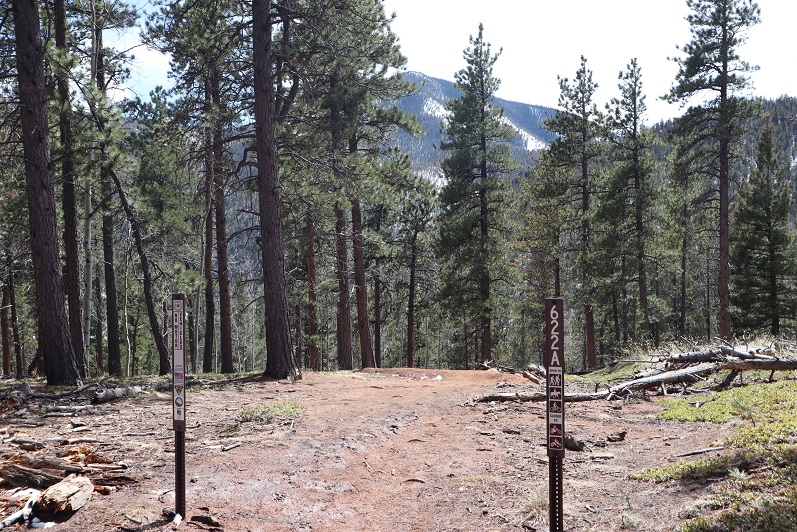 We were surprised to find when we made it back to the lot that it was overflowing with cars! 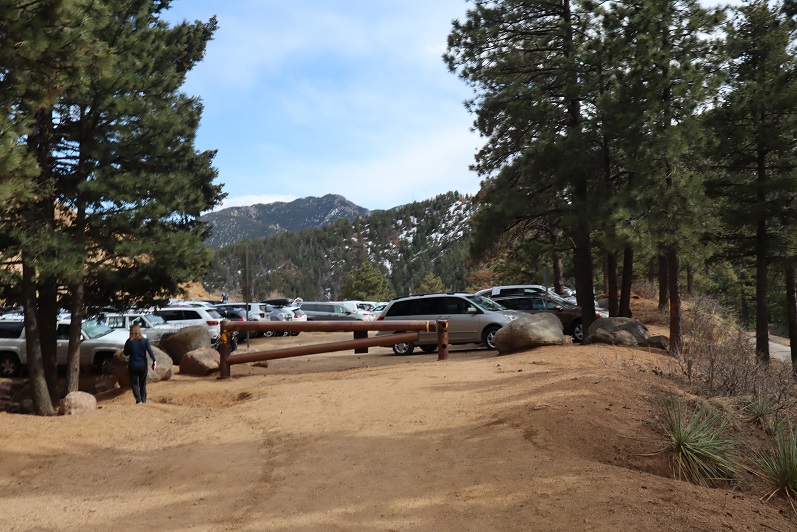 What was disturbing was about a third of these vehicles were from out of state. We’re supposed to be staying home and hiking only in our respective county, and I’m doing my best to abide by those rules (before they get worse). It was extremely frustrating to see so many out of state cars, and they just kept going and going and going: the lot was overflowing and cars were parked along the side of the road for miles as we exited. There were more cars here than I’ve ever seen in the summer. It must be Spring Break in other states and they’ve decided to still take their vacations.
We made it back to the truck at 3:30pm, making this a 12.5 mile hike with 4220’ of elevation gain in about 8 hours. It was a perfect day to go hiking!!! I’m so glad we got out and got some fresh air!