I drove up to Carson Pass a few days before and slept in my truck, hiking Bent Peak the first day, and Carson Pass, Tundra Top, Cataract Peak, and PT 13581 the next. For details on the drive in, please see this post: Carson Pass.

I woke up before my alarm again today, but not because I was well rested: I was cold! As I turned on a light I realized I only had half of my blankets covering me. There wasn’t any wind last night, and when I looked outside I could see tons of stars. The clear skies had made for a cold night. I jumped in the cab of my truck to warm up and get ready for the day, noticing it was 32 degrees outside (as compared to yesterday morning’s 43). It was amazing what difference a few degrees makes.

I turned the truck on to turn on the heat and was once again disappointed to notice my ABS and Traction lights were still on, as well as my 4WD light still blinking. That was going to haunt me all day.

I was on the trail by 3:30am, and it was so cold I turned back at one point, intent on sitting in my truck a little longer, but I immediately turned back again: I’d knew I’d warm up a bit once I started moving. The weather forecast was better for today, but I still wanted to get an early start. I followed the 4WD dirt road 821 to the class 1 Trail 813 as it lost a total of 400’ as it wound down the canyon, and then gained almost 1000’ to the top of the pass.

There was one small section of snow to cross, but luckily the elk had already done a great job blazing the trail.

Once at the top of the pass I continued along the trail, dipping down into the basin, losing another 700’ of elevation. 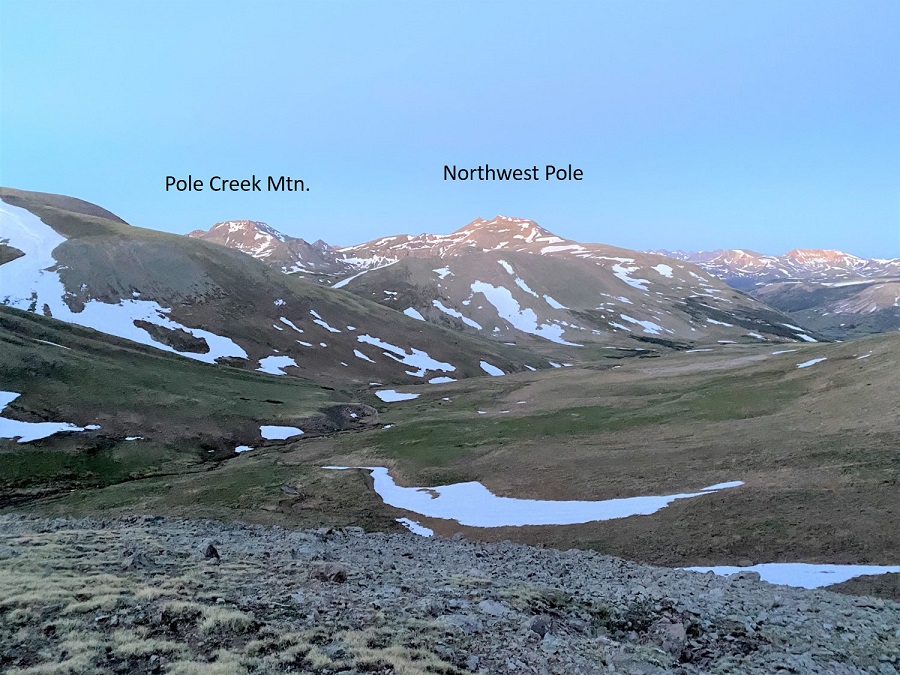 After hiking for a total of 5 miles at this junction I turned and followed 822 southwest to the base of the Northwest Pole Ridge.

My goal here was to gain the ridge and follow it to the summit of Northwest Pole. Here’s an overview of the route: 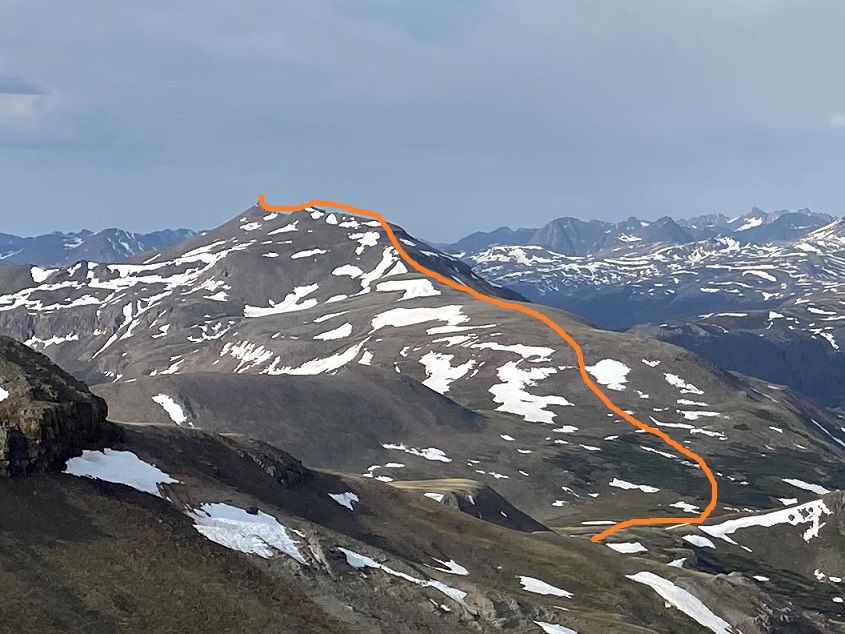 And what it looks like gaining the ridge (yes, tons of elk out there today). Also, the basin was marshy, but since it was so cold and early in the morning it was frozen and crunchy. There were ribbons of water that I hopped across. I wouldn’t want to pass this area when it’s soggy and wet. 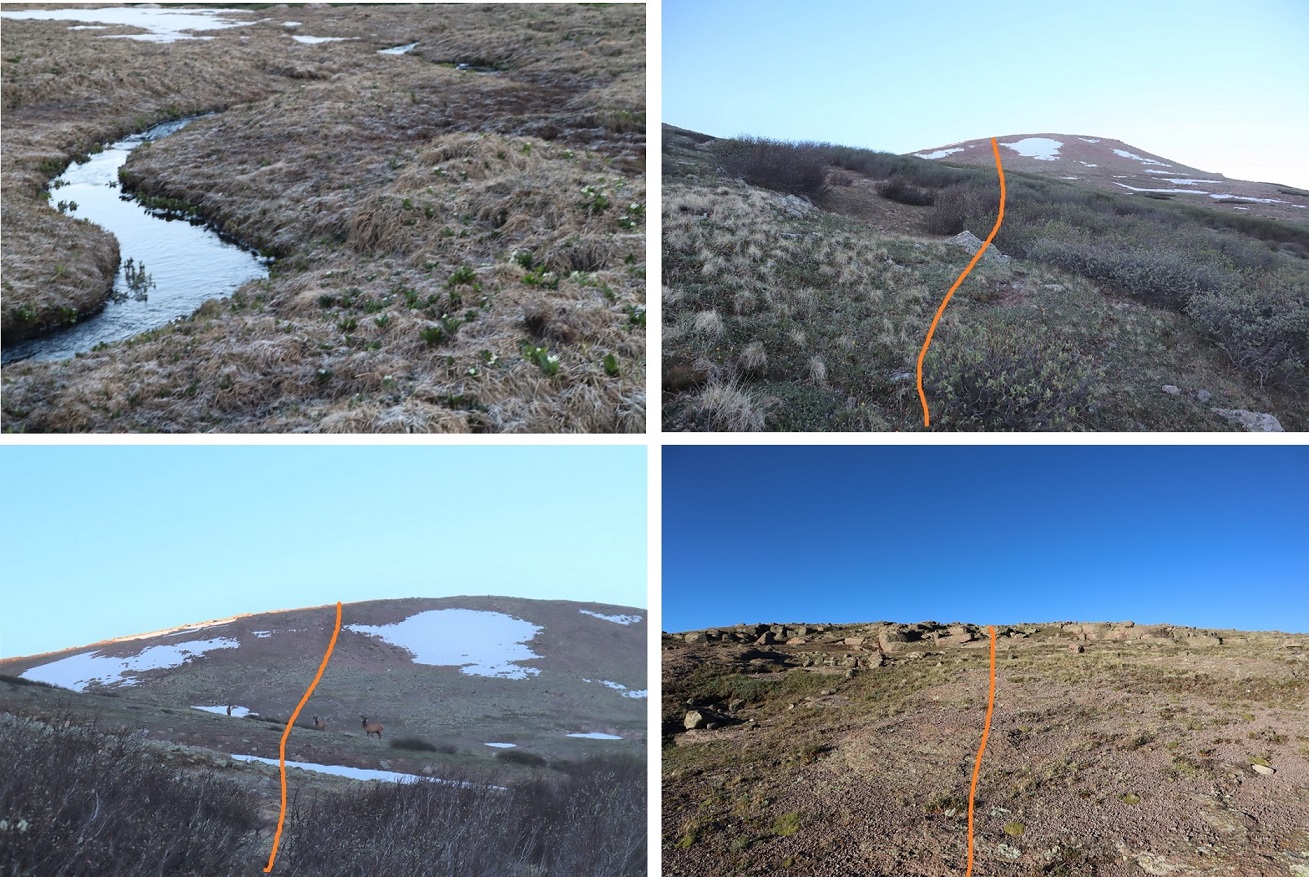 Once on the ridge it’s easy to see the snow free path to follow, all on tundra. This is all easy class 2 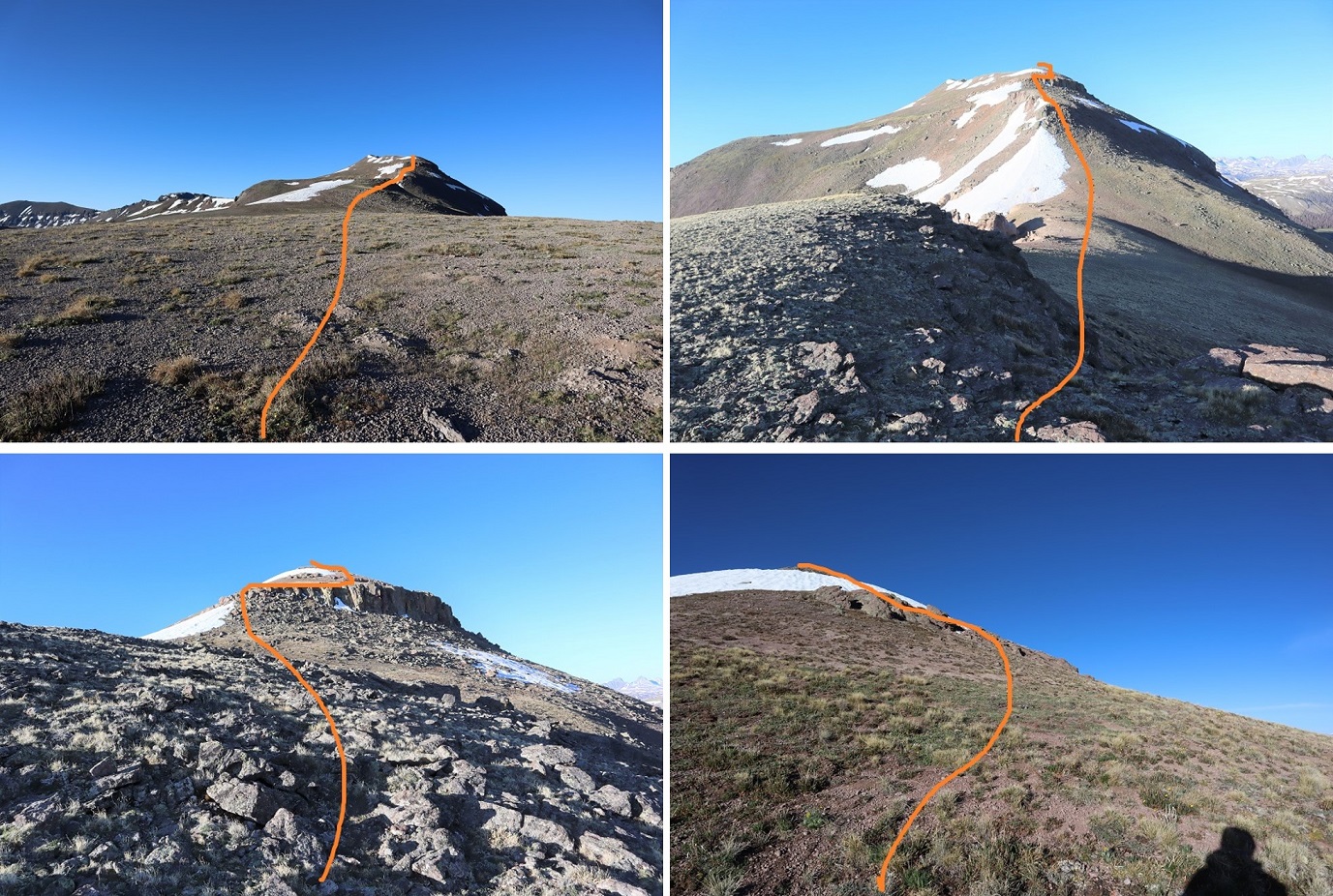 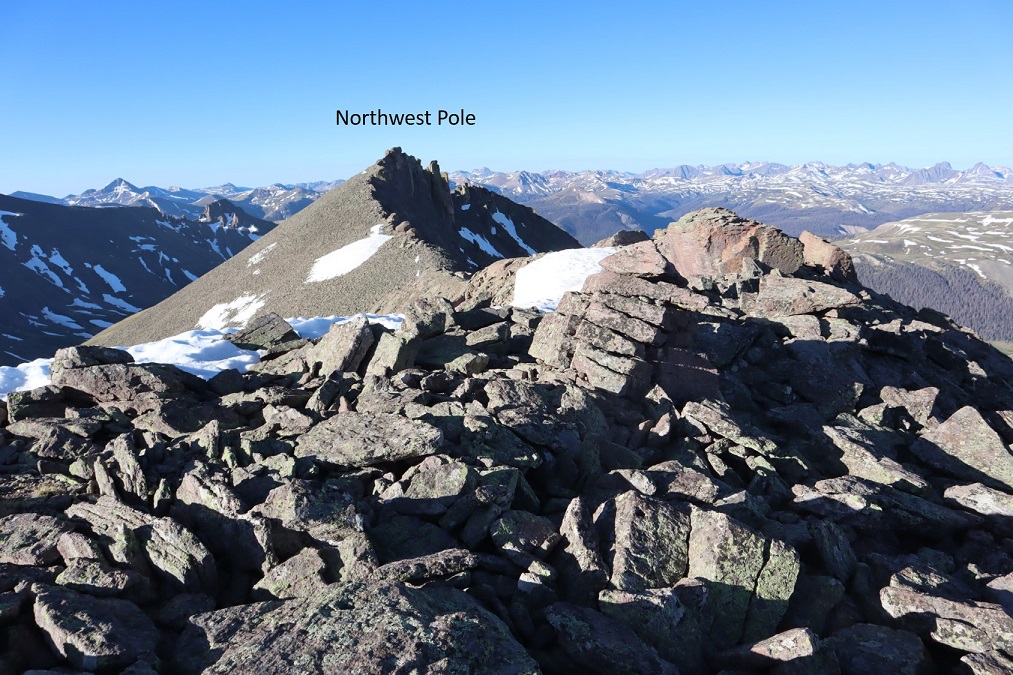 The crux of this climb comes at the very end. I spent some time trying to figure out how I wanted to summit. At first I tried to gain the block at the area where all the bird droppings were, but it didn’t look like it was the easiest way. Next I tried summiting up a chimney, but about halfway up I knew I’d need rope to get back down (I’m short) so I stopped and looked for another route. In the end I was able to summit by going up the area with all the bird droppings, just from a different angle. There is a lot of exposure here and small scree on the rocks, making it slippery and a fall dangerous.

Here’s the route I took:

I aimed for the bird droppings. Here’s what that looked like from a couple of different angles.

From there I traversed along the exposed edge towards the summit.

It looks easy, but this is the exposure, and yes, it included a trust jump (once again, I’m short, it could have been more of a long lean for someone over 6 feet tall, but I had to jump). Here’s looking back on the jump area (it’s too difficult to see in a picture coming from the other way, but this picture offers a good look back on the ridge too)

Here I am getting ready to jump the area on the way back. 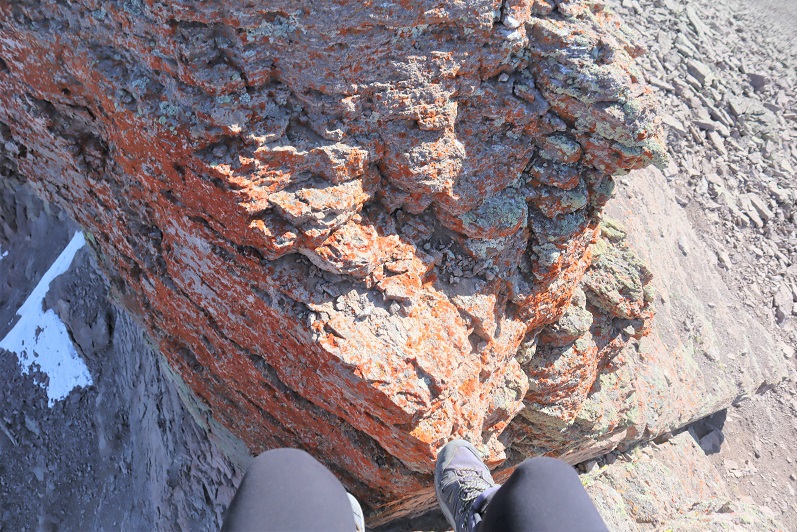 And from the top where the bird droppings are back down. Yes, it’s as steep as it looks

Back on solid ground I took a picture of the summit block and how I traversed it. I circled where I jumped.

Time to head over to Pole Creek Mountain. Here’s an overview of the route from Northwest Pole 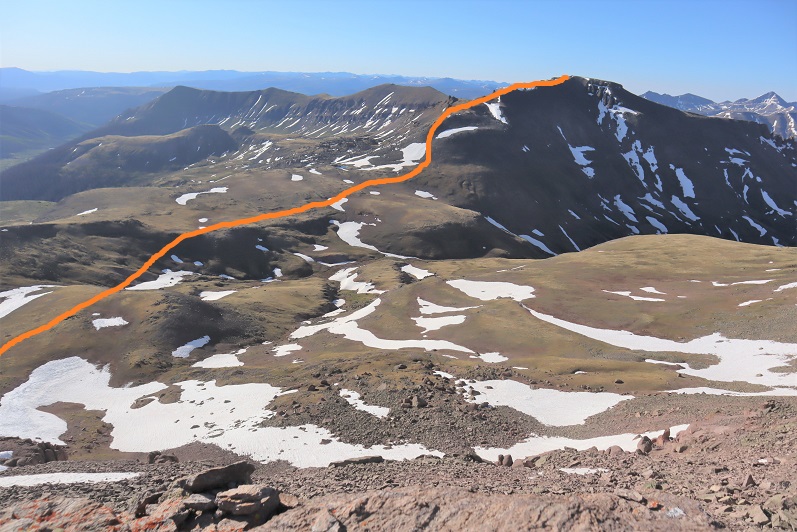 I descended east towards the basin, first on loose rock that gave way to tundra, losing 850’ of elevation, crossing a stream, and heading back up towards Pole Creek Mountain.

Here’s looking back at Northwest Pole 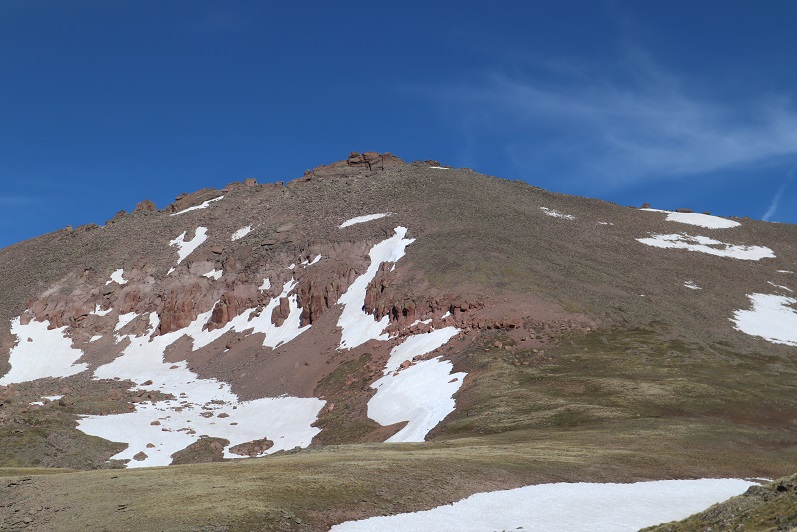 I continued southeast towards Pole Creek Mountain. Here’s how I ascended; the snow was easy to avoid, and I used it to track where I wanted to go:

After ascending the ridge I aimed for the access gully, which had snow but enough dry areas to pass easily without traction

Then I just followed the ridge south towards the summit

I summited Pole Creek Mountain at 9:45am, after almost 10 miles of hiking 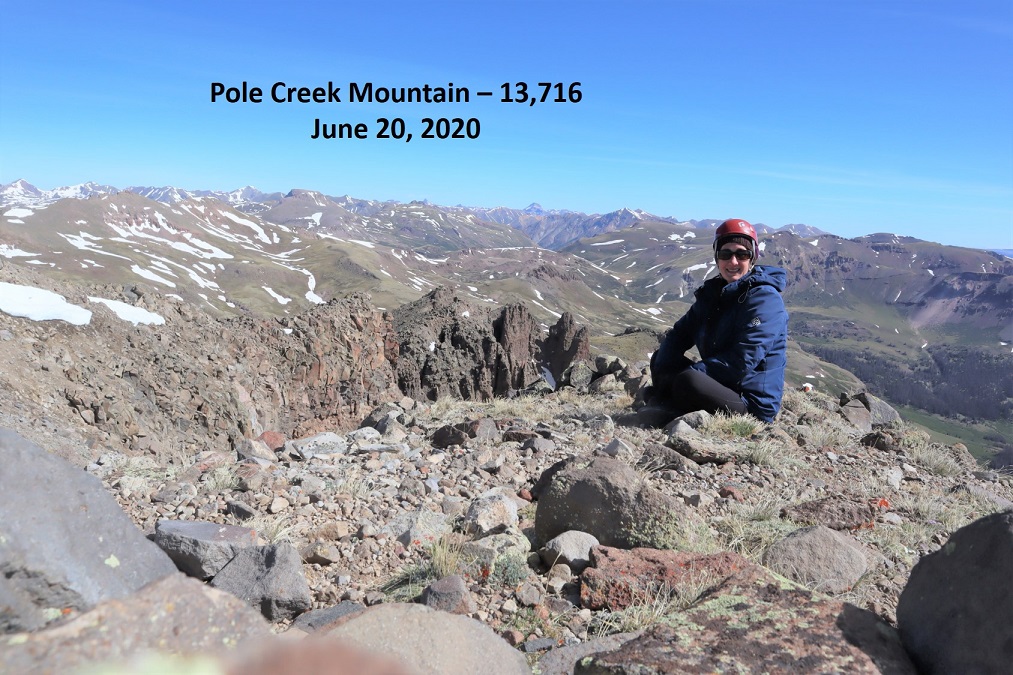 I headed back the same way I’d come in, following the ridge and then going back down the small access gully. Everything looked totally different on my way back and I second guessed myself a few times, but keeping Northwest Pole in sight helped.

I headed north, and then east around this small peak.

There was some snow here, but elk in the area make a great trail and traction wasn’t needed

I rounded the east side of the small peak

And unexpectedly came across a small herd of elk! This was so cool! I’ve heard of elk doing this, but I’d never actually seen it before: the mama elk were laying in a circle, with the babies laying down inside and two sentries standing guard. I saw them a split second before they saw me (the wind was blowing towards me, so they hadn’t heard/smelled me) and I was able to get a picture before they took off

As soon as one of the elk standing guard saw me I could almost hear him say:
“See? This is why we always employ the safety circle! Always! This is not a drill! Move! Move! Move!”
And they were off and down the hillside, out of sight.

Well, that had certainly been a neat experience! I continued rounding the peak and then made my way down the hillside, all the way to the basin floor. Here’s an overview of the route I took 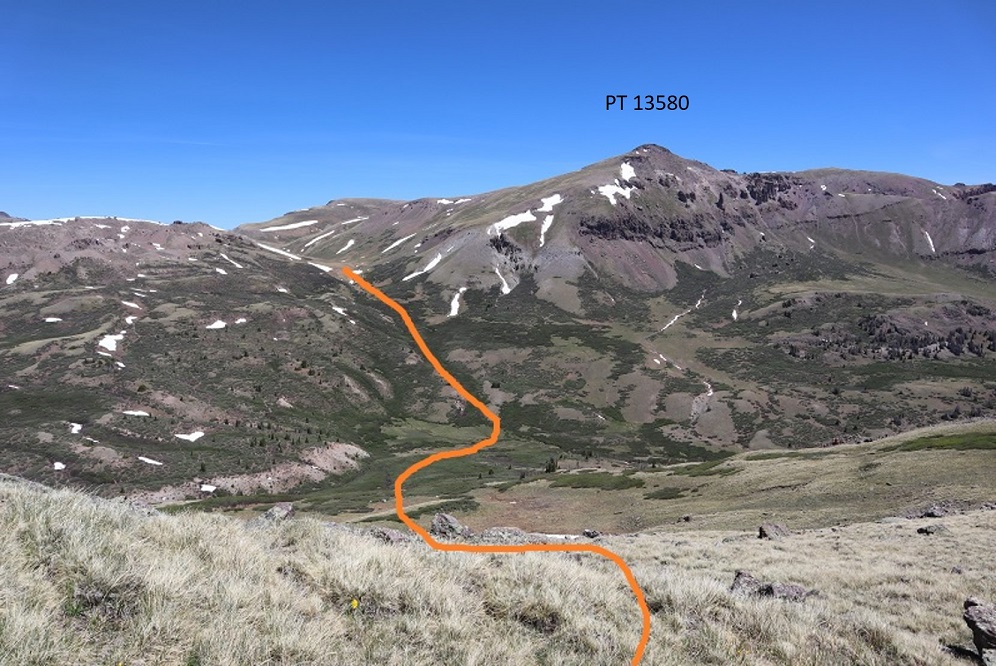 And looking back, here’s the route I took down into the basin. For obvious reasons I’m now referring to this as “dementor ridge” 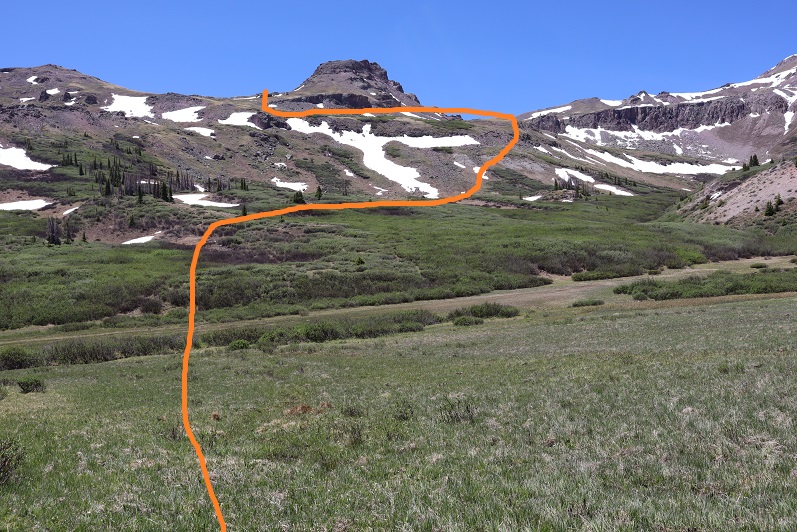 Once in the basin I was at the lowest elevation I’d be at all day, and still had a lot of hiking left to do. I aimed northeast until I hit a trail, and then followed it up. This was trail 822 that would bring me back to Trail 813 (if I chose to go that route). This was actually easier than it looks because there are a lot of good elk trails in the area, passing through the willows.

I followed the trail to a sort of a saddle, and stopped to think

From here the trail obviously dipped down once again, losing several hundred feet of elevation before reconnecting with Trail 813 and gaining the pass, then dipping back down into the basin and up again out. Here I was, sitting directly below PT 13580, a ranked 13er that I’d want to hike sometime in the near future, but in which I dreaded that drive into Carson Pass that would be necessary again next time. It was still early in the day and the weather was great. I decided to just summit PT 13580 now while I was in the area. I’d done some scouting yesterday and today, and I was sure the route from the summit of 13580 back to the pass ‘went’ easily and would be snow free. I turned right and headed east up the mountainside. This was a very straightforward hike up tundra

At the top the tundra turned to rock, all class 2 and easy to navigate

At the top of this rocky area was the summit. I summited at 2:15pm

Here’s a look back at the route 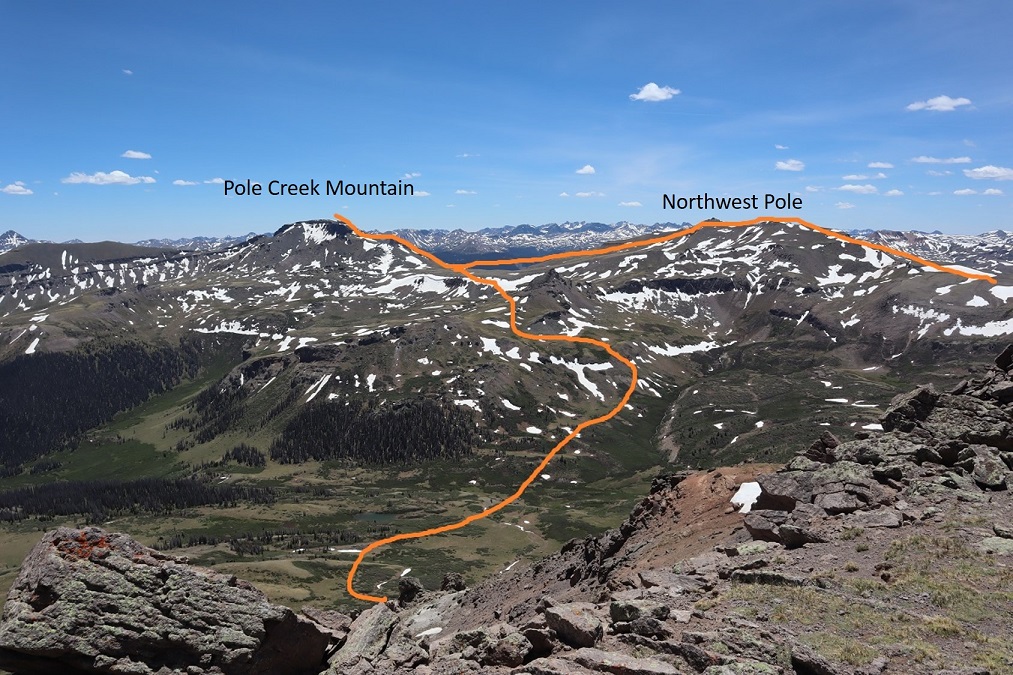 Now I decided to stay high on the ridge and aimed north, following the ridge towards the peaks I’d climbed yesterday

And then back down to the pass and trail 813

The hike out was uneventful. It was a beautiful day and I just followed the class 1 trail back. Oh, and I saw the moose again, in the same spot as yesterday.

When I made it back to my truck I noticed a marmot running out from underneath. Great. I decided it would be best to try to drive my truck down today in the daylight in case I got stuck, but because I also didn’t want to encounter other vehicles (if possible) I decided to eat dinner first and take my time. Also, I wasn’t even sure yet my truck would drive.

When it was time to go I was able to get the truck to move and tried to see if I could get 4WD to engage by driving the truck around for a bit, but that didn’t work. So I decided to just go for it and head back down the road, going as slow as possible. I probably maxed out at 2mph. When I got to about a mile from the end of the 4WD road I saw another vehicle turning around. It took them 20 minutes to do so, and by this point I was feeling pretty confident about my truck.

I made it back to the 36, kept trying different things to get my 4WD light to stop flashing and realized it was hopeless. I drove home and the first thing the next morning went to the dealership. The diagnosis: rodent damage. One of those darn marmots, chipmunks, pikas (etc.) had bitten through the wiring. Luckily it was fixable, and I was out of there within a few hours. They put rat tape over the wires to hopefully prevent this from happening again. I’d never heard of rat tape before, but it sounds like it should be on all wires.

I consider myself lucky: after years of leaving my truck in the backcountry this is the first time I’ve ever had this issue where it’s caused concern. I’ve chased some porcupine’s out from underneath my truck before, but that was before any damage was done.

I’ve done some serious thinking about the issue, and I think a physical barrier is the only way I’m going to keep rodents out. So here’s my idea: tomorrow I’m going to Home Depot and buying a large tarp and some bungee cords. When I park at the next trailhead I’m going to lay out the tarp, drive over it, and then secure it around my truck with bungee cords to prevent critters from getting underneath.

This is just a thought at this point, but something I hope to implement and test soon.