I didn’t want to get up when my alarm went off at 2am.  I really didn’t.  I rarely ever want to get up when my alarm rings, but today I was extra tired.  I really wanted that extra sleep.  I reminded myself while it’s typically difficult waking up early for a hike, I always thank myself for it later.  So I dawdled and took extra time getting ready, trying to wake myself up.  It was supposed to snow last night and there was as 40% chance of snow today, so I dressed in triple layers of pants and double jackets (necessary for me, not for most people).  I also had 3 different pairs of gloves.

I drove to the trailhead and actually stopped at a gas station for 20 minutes to sleep for a bit before continuing on:  I was more tired than I thought!  I felt great after that quick cat nap though.

I finally made it to the trailhead at 5am and was ready to go by 5:15am.  Already I could tell this was going to be a much different adventure than when I was here last March and the area was covered in feet of snow (https://wildwandererlmc.wordpress.com/2018/03/31/wheeler-lake-12168/).  I’d had to turn back at the lake on that trip, but I’d learned a lot!  Today the gate was open all the way to the mill, and there wasn’t any snow to be seen anywhere (in the dark that is).  The road in is a 2WD dirt road all the way to the mill

There’s plenty of parking all along the way.  I chose to park by the mill (the ‘lot’ there holds about 7 vehicles).

Here are some pictures of the Magnolia Mill, which I swear is going to collapse any minute…

Don’t go past the mill unless you have a heavily modified 4×4 vehicle.  You will get stuck.  Here are some pictures of the 4×4 road in

And one of a truck getting stuck on my way out

You can follow the 4×4 road all the way to Wheeler Lake:  it’s about 3 miles.  Wow!  Was this a different experience than the snow-covered road I’d encountered back in March!  Back then I wasn’t even aware there was a road… I kept looking for trails.  It was obvious from my hike today I’d been way off route earlier this year.  Way off.  And the road had to be under a good 5 feet of snow at the time because these willows which were taller than me now were only about 6 inches high last time I was here.  I’d gone in circles in the blowing snow trying to route find my way to the lake (and back).  Today was a breeze!

I kept thinking to myself: those rocks are going to be a bugger to hike over on the way back down (they were).

What a difference the season makes!  One bad part about no snow?  The road was pretty much a river most of the way.   Most of the areas of road covered in water had side trails going through the willows so you didn’t need to walk directly through the mud puddles, which I’m sure added to my route confusion in the snow as well.

Oh, but it was still early morning and I was hiking through all of this at night…

It’s about a 3 mile hike from the Mill to Wheeler Lake.  I made it to the lake just as the sun began to rise (and thought back on how difficult this trudge had been in snowshoes:  there were actual spots that had had exposure with all the snow and I’d been fearful I’d slip and slide down the mountain.  Not so today.) 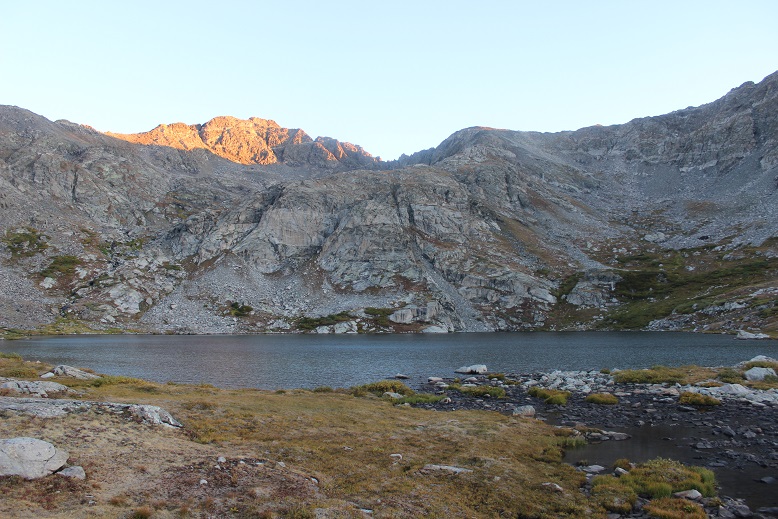 This is where the route ends and the creativity begins.  Hike around the lake to the left about ¾ of the way around.  You’ll notice an unmarked path left and up a drainage.  (There’s no trail, make your own)

There are a lot of mines in the area.  I counted at least 6

When you get to the top of the drainage you’ll find yourself in a small basin.

I tried to stay higher up to the right, and this ended up being a mistake:  Stick to the middle, go up the area with small ponds and waterfalls, and head west.

I was trying not to lose my elevation gain, but all I ended up doing was complicating things with lots of rocks, slowing me down. 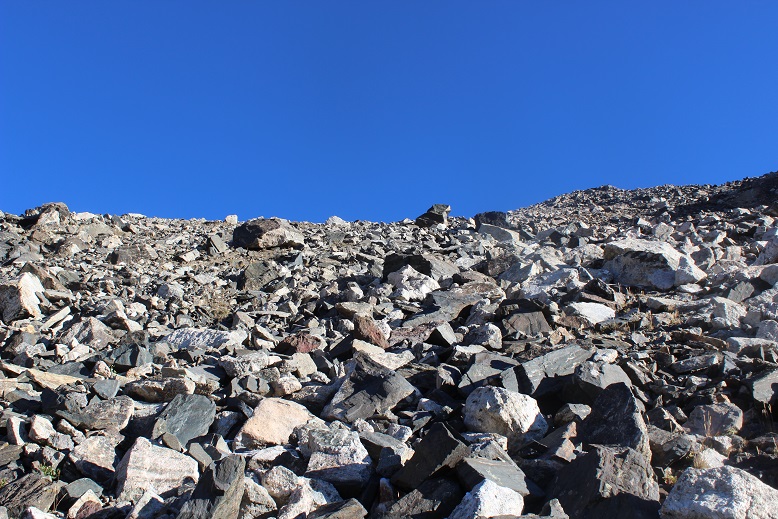 So my route had steeper elevation, lots of loose rocks and scree, and was thus very slow going.  I rounded the corner and kept heading northwest.  Finally I was able to see the summit!  If you’re hiking this too you can breathe a sigh of relief now:  the worst of the hike is over (yes, even if you’re doing all 3 summits)

As I rounded the slope the rocks became slippery:  everything in the shadows (west) had a thin layer of frost covering it (slippery!)

I gained the ridge and followed it to the summit of Clinton Peak.

I turned back and looked at the way I’d come:  that had been a steep climb! 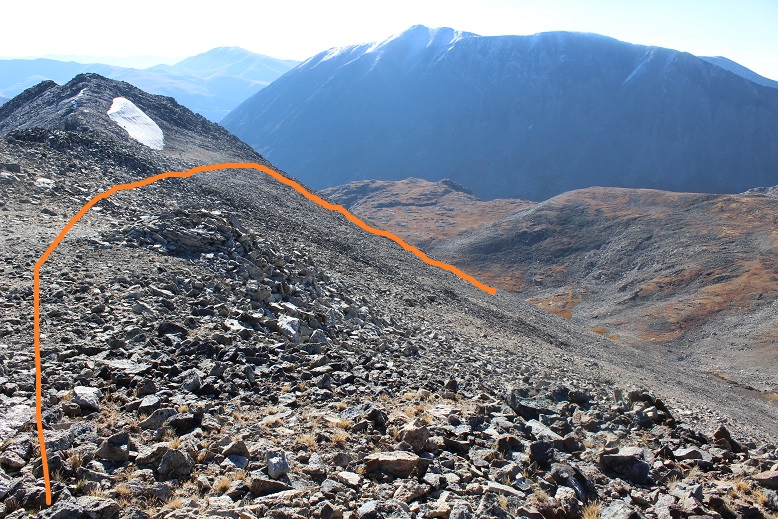 From Traver Peak, here’s a view of the route I took (solid line) versus the one I should have taken (dotted line) 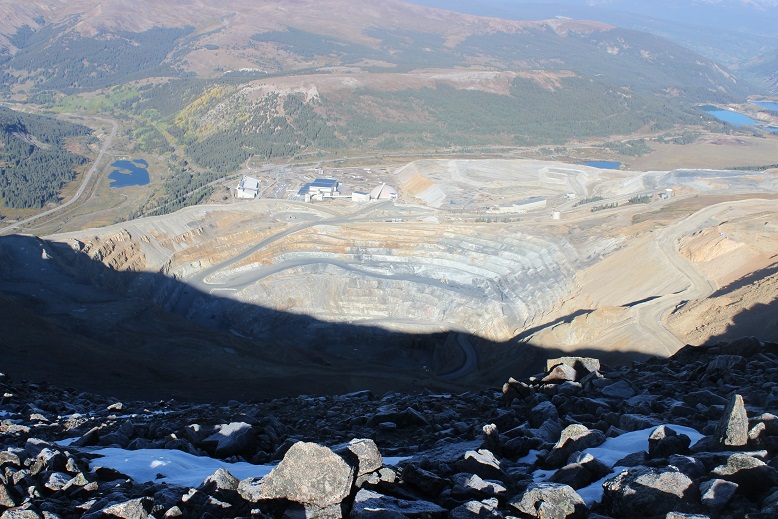 The rest of the route before me was very straightforward.  It was class 2 ‘climbing’, following the ridge.

There were a few large rocks to contend with, but nothing class 3, and all avoidable if you went down the ridge a bit (go left (east) to avoid frost).

There were also small bits of snow, but nothing that got in the way or wasn’t easily avoidable 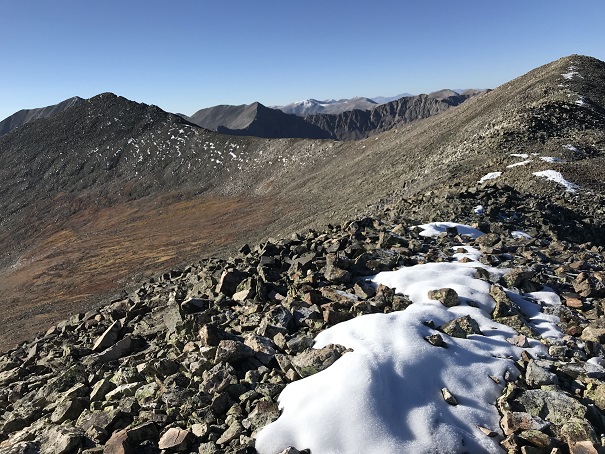 I couldn’t help but think as I reached the saddle of Clinton/McNamee how much easier this hike would have been to just continue straight all the way through the basin up to this saddle.  It would have added maybe a mile to the hike (maybe) but also made the elevation gain so much simpler to deal with!  I’m sure it would have cut my time down at least an hour. 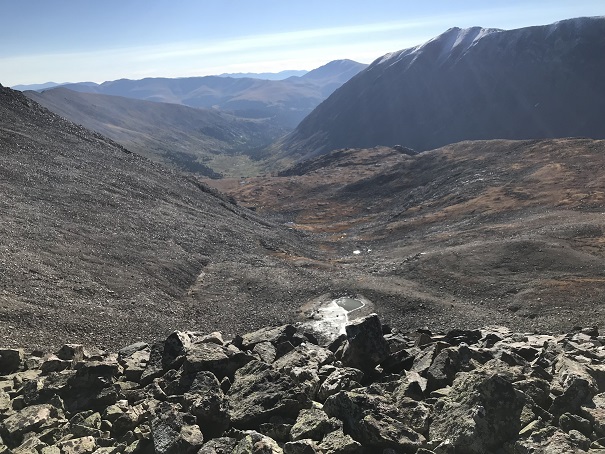 The path to McNamee was about half a mile and easy to follow.  I summited at 9am

There was a lot of mining trash on this summit!

Here’s the rest of the route to Traver Peak 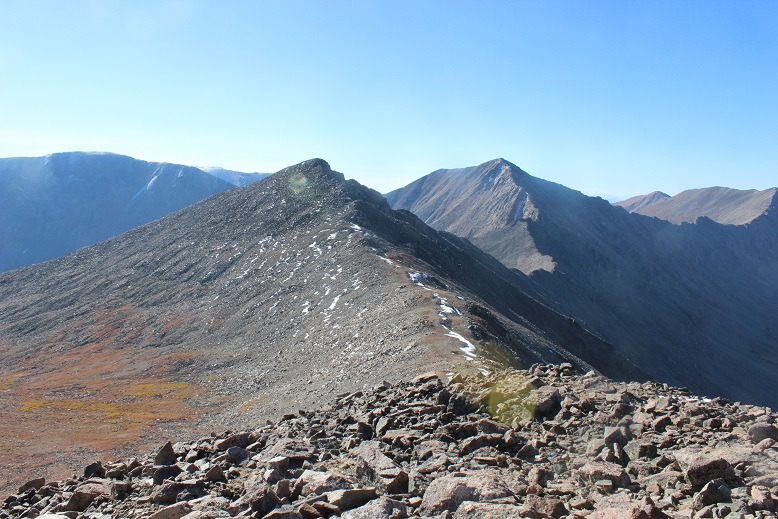 Summiting Traver was just a little more difficult than McNamee, but as long as I stuck to the ridge I was just fine (class 2).  There were a couple of places I intentionally made it a class 3 climb, but they were completely unnecessary. 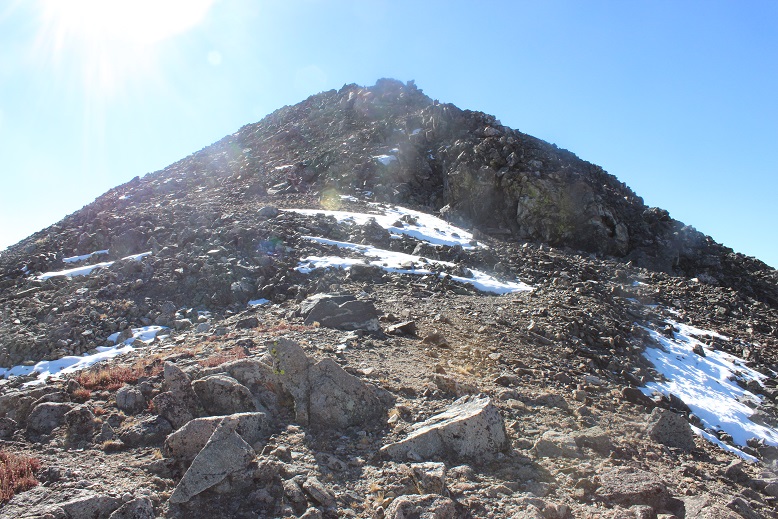 There was also a metal trash can full of rocks on the ridge? 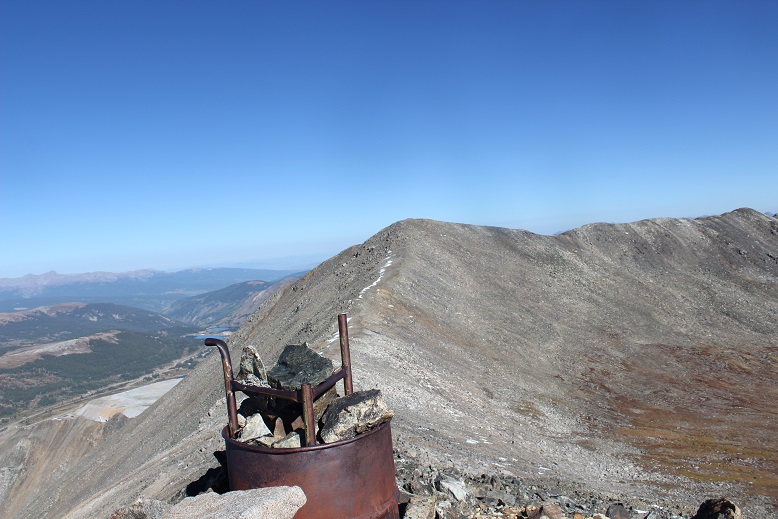 There had been a light dusting on DeCaLiBron the night before

Ok, now it was time to head down.  I turned east and looked at my route before me.  All I had to do was follow the ridge down and head for Wheeler Lake.  It was quite simple really 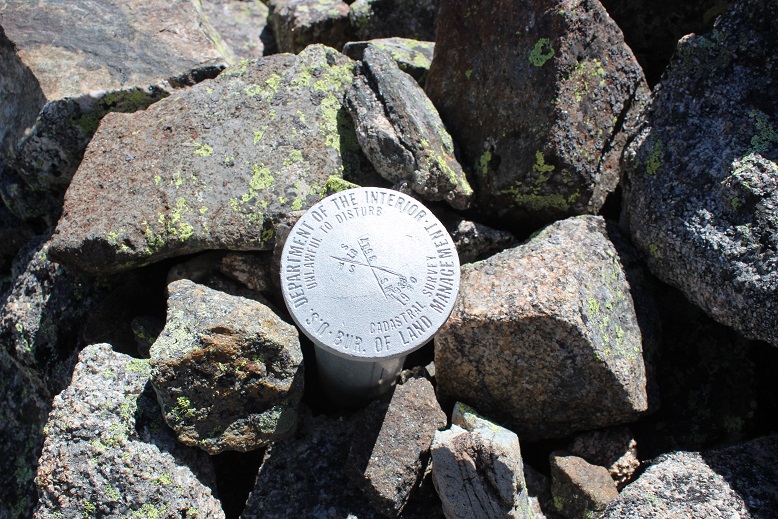 And halfway down the ridge I saw a large cairn.  Or at least that’s what I thought it was until I saw the stone with writing and a date.  I couldn’t make out the writing, but the year is clearly 1881.  When I got home I looked it up online, and couldn’t find any information about a possible grave/death/etc.  It looks like a cairn grave to me (think Oatman family?).  Thoughts?

The ridge was easy to follow with medium sized, mostly stable rocks.  I couldn’t help but think how much easier it would have been to have done this hike in reverse, instead coming up the east ridge of Traver and down Clinton.  My advice to anyone doing this hike:  HIKE IT IN REVERSE.  Or go up the McNamee/Clinton saddle, over to Clinton, and then back to McNamee and Traver.  That trek up Clinton’s south slope is a bugger! And from what I experienced on the easy way down Traver, totally avoidable and unnecessary. 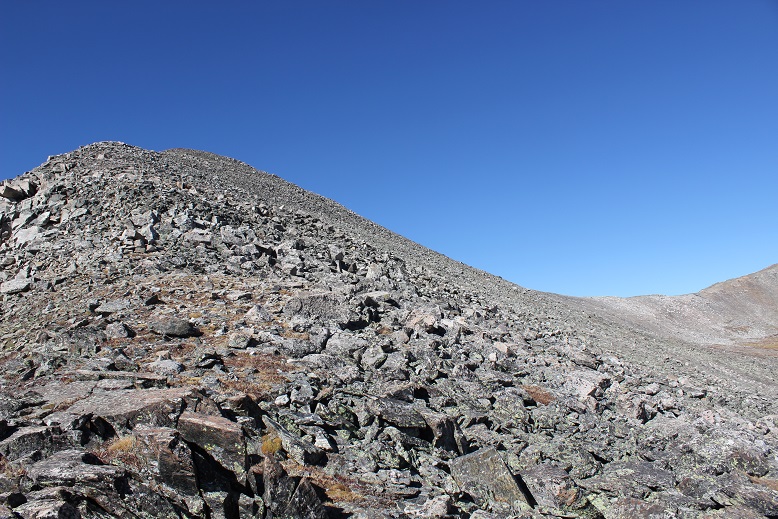 In any event, the cairn is clearly visible from a ways away.  It’s a good marker to look for (especially if you’re hiking this in reverse).  When I made it to the cairn I headed down the basin, over large rocks and some grassy areas.  Before the bottom of the basin I was greeted with some large boulders.  I didn’t have to climb down them… but I did.

Here’s the route I took.  I obviously could have avoided the boulders by sticking to the north.  (Note, this is NOT Wheeler Lake, but a small pond in the middle basin).

All morning and afternoon the weather had been perfect!  The skies were clear and I’d way overdressed (no worries, this is better than the alternative).  The basin was beautiful, and I got to thinking:  Life for me has been extremely difficult in the past and I’ve been through some dreadful things no one should ever have to go through, but today, life is good.  I mean really, really good!  I’m the happiest I’ve been in years, my kids are all amazing and doing amazing things with their lives, I get to hike every Friday, I paid off my truck this month (woohoo!  This means I’m debt free!), and I’ve now completed 28 13ers (think I can hit 30 by my birthday on the 18th?).  I was in a great mood, and so glad I decided to go hiking today! (See?  I told myself so!)

Here’s where the hike became beautiful.  As I was exiting the basin and aiming towards Wheeler Lake I was able to notice all the fall colors.  Here’s a look at the North side of Lincoln (14er)

And a look back down on Wheeler Lake

I passed by the waterfall and skirted the lake

Here is where I met back up with the road again.  The 3 miles out would have been easier and much faster without all those rocks in the road, but at least route finding was easy!

The fall colors are starting to change early this year.  The drive through Alma was unexpectedly beautiful! 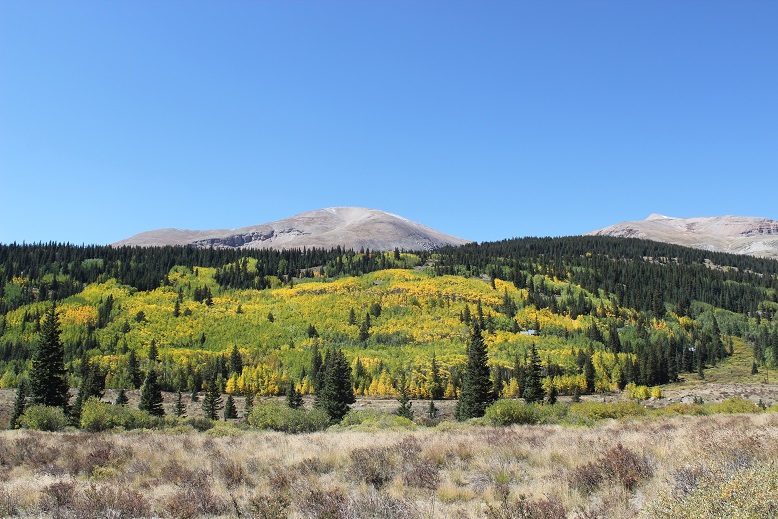 Here’s another look at the peaks